Doug Perkins spoke to OT  at the launch of a Specsavers and RNIB report, which revealed that one in five people will live with sight loss in their lifetime 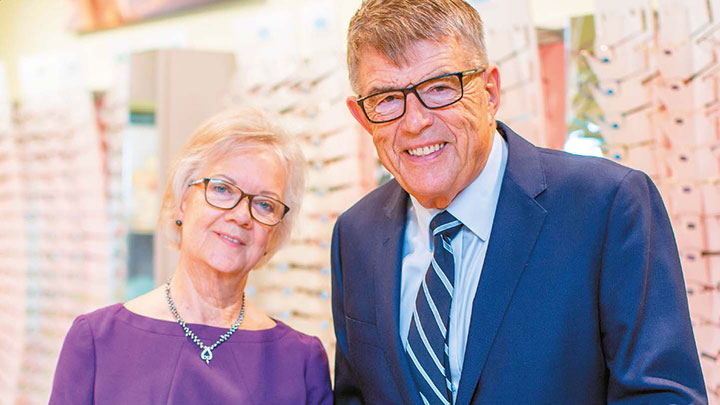 What findings from The State of the Nation Eye Health 2017: A Year in Review report concerned you the most?

The fact that every family is going to be affected. There is an ageing population with eye conditions and a significant amount of those are to do with the loss of sight. One in five people will have some loss of sight and more than half of that can be looked after at an early stage, whether that’s through correction with appropriate glasses or attention to primary eye care. The findings are all dramatic and they are all going to lead to a crisis.

Does there need to be an improved message from the industry to improve the nation’s eye health?

Specsavers is focusing its marketing on public information for eye health. That’s going to be very much at the forefront of activities. Over the last 20 or 30 years a lot people would say there’s been enough product and fashion information, which is all good because it brings people into a nice, friendly store environment. However, what is emerging now – and it’s the big thing that needs attention – is eye health.

Specsavers has announced that the investment into the campaign is being doubled – where will this money be used?

We are going to double our efforts in order to get people to realise that the Royal National Institute of Blind People (RNIB) is an organisation that is purely for protecting eyesight for the future and treating unnecessary loss of sight. There is £8 million for new marketing, and £100,000 has been fundraised by individual schools for RNIB’s charity work. We are on a journey to make RNIB our biggest charity. At the moment Comic Relief occupies that slot with £400,000. We confidently expect to achieve £500,000 for RNIB within two years.

Writing to MPs was highlighted as a way to get eye health on the national agenda, is this the right approach?

It’s good to see how this could become political. We are not aligning ourselves with any particular party, but we like the key messages that we heard today. We’ve got the technology and the practitioners to make a difference. With GPs and hospital departments stressed, and to have 3000 of our own practitioners keen to make a difference that we’re not using, doesn’t seem to be the right thing. We’ll be campaigning and that might mean asking people to write to their MPs – hearing about how much politicians are interested is something we’ve heard about for the first time today.

What is Specsavers doing to create a better relationship between optometrists and ophthalmologists?

The fact that it doesn’t happen now creates a huge gap. What we are doing is closing that gap, which takes an incredible amount of effort in terms of cost and to spend the time with busy practitioners, like ophthalmologists and GPs. The evidence is there to suggest that they are interested in creating a better relationship with optometrists. This is going to happen on a region by region basis. We’re starting from zero so we’d like our optometrists to meet an ophthalmologist every month and for them to tell us how we can make their lives easier. I will pledge that this will be happening on a regular basis in dozens and dozens of regions by this time next year – it’s a main theme of what we’re about. We need to meet these colleagues and see how we can help them better, and obviously how they can help us as well.

What are the three main actions that need to be taken following the report?

1. Continuous training to take the skill and experience of the profession forward
2. Working to close the gap with GPs and ophthalmologists
3. Find out if there is a political opportunity to change the model based on what’s happening in Scotland and Wales, or improve on that model.