Shamir has launched a new technology which fuses a multi-feature overlay, combining a coating structure with an optical film to any lens, in a process that aims to create lenses that are strong, thin and light.

The nano-structure lens manufacturing technology, Metaform, was co-developed with Satisloh. The process fuses a Preform overlay with any lens through an eco-friendly thermoforming station.

The Preform overlay contains coating features, along with an optical film that is also used in the automobile, aviation and space industries for its impact resistance qualities. The company suggests this enables a thinner and lighter lens that is more durable, without the risk of peeling and breakage.

Shamir suggests the Metaform process results in a lens that is up to 18 times stronger than the FDA standard requirement, and 40% thinner and lighter than regular lenses (in minus lenses) with the coating built in.

Russell Bickle, general manager for Shamir UK, told OT: “The technology is for any practice looking to move to the latest technology that is thinner, lighter and uses 90% less energy and water than a traditional coating.”

The product is already available in Portugal, and will be launching to select customers in the UK in September. The company also hinted that other features will be added over time. 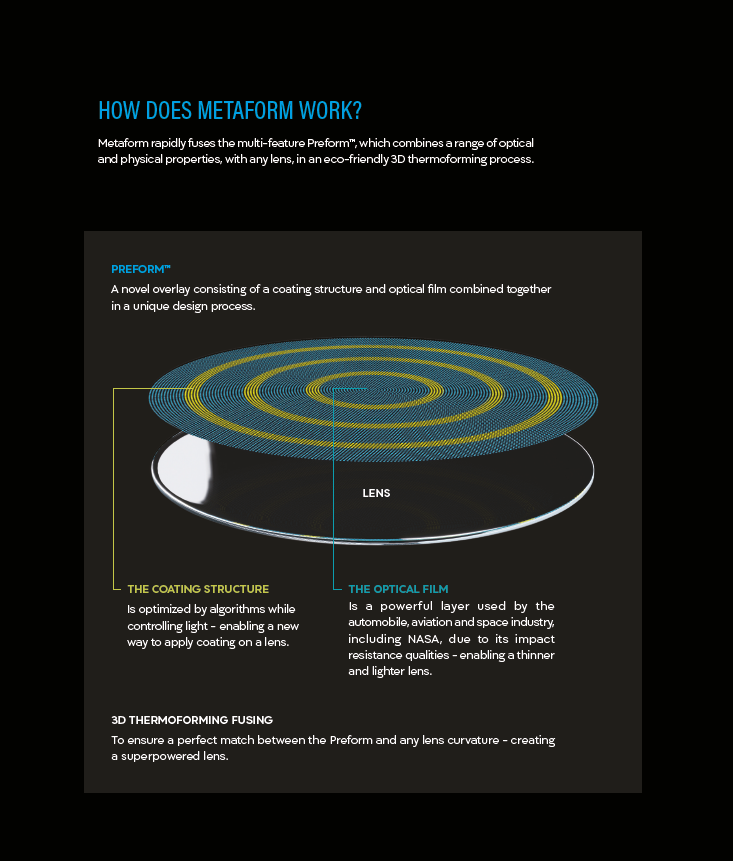 How the Metaform technology works

Describing the energy efficient approach, Bickle explained: “The way the Metaform lens is produced means we do not have to use larger coating chambers, which demand a high energy and water use.

“The technology was developed from principles used in aviation and we believe it will become the industry standard as freeform is now in the next few years.”

On the launch of the platform, Yagen Moshe, CEO of Shamir Optical Industry, explained: “The optical industry underwent a revolution with the launch of Freeform, and with Metaform, we are proud to bring to the world the next technological revolution in the world of optics, breaking the boundaries of what’s possible in lens production.”

The company has said that anyone interested in becoming a Metaform supplier should get in contact with the Shamir team with their practice and contact details.