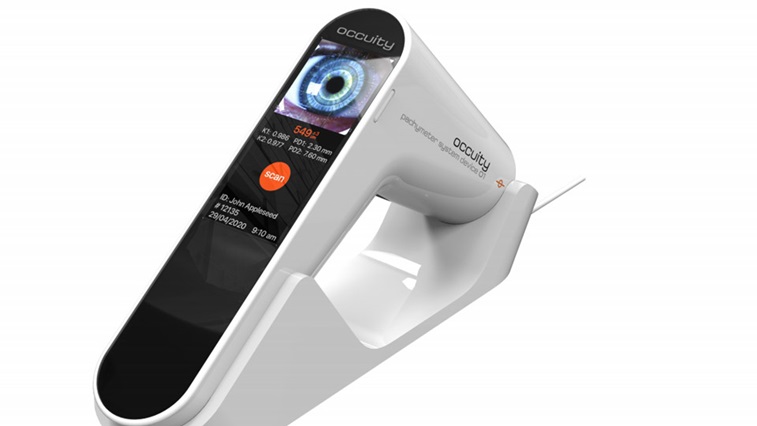 The medical technology start-up, Occuity, has announced plans to launch a handheld non-contact optical pachymeter in 2021.

The new device will make taking corneal thickness measurements quicker and easier for optometrists, with the founder and CEO, Dr Dan Daly, explaining that the company aims to “revolutionise the detection of glaucoma by making it easier, faster and safer.”

The company aims to provide a device with the measuring capabilities and non-contact features of existing desktop devices, but at a price competitive with existing ultrasound meters.

The handheld and non-invasive design of the Occuity pachymeter is expected to make it quicker and easier to use. Patients will not require eye drops, while the technology will be able to provide a measurement in under 10 seconds.

The process will be COVID-safe as there will be no contact with the cornea, reducing the risk of transmission, Occuity suggested.

The company also suggested that the device can be operated by non-clinicians.

An advanced prototype of the device is undergoing in-house testing, and the company is finalising the production version that will undergo clinical trials and CE marking in early 2021.

It is expected that the handheld pachymeter will be available in the second quarter of 2021.

As the corneal centre thickness (CCT) can affect the validity and accuracy of the intraocular pressure (IOP) measured by the tonometer, Dr Daly suggested: “Knowing the CCT will allow clinicians to understand if their tonometer is actually under or over-estimating the IOP.”

“If a practice is involved in glaucoma shared care, for example, they should measure CCT and provide this with their reports, along with IOP and sometimes ‘corrected’ IOP,” Dr Daly said.

Patients with thinner corneas are at a higher risk of glaucoma too, Dr Daly noted, suggesting that understanding the risk factors is important.

Other circumstances where CCT might be useful, Dr Daly suggested, would include the detection of Fuch’s endothelial dystrophy in post-cataract patients, detection or progression of keratoconus or other corneal ectasia’s, as well as assessing the stability of corneal grafts.

The in-house testing on the device, which is currently underway, is focused on the verification of the meter.

Dr Daly explained: “It will enable us to ensure that the meter functions correctly and has achieved its technical specifications.

“Clinical trials will be conducted in conjunction with partner universities and hospitals to validate the clinical performance of the pachymeter.”

After the launch of the pachymeter, Occuity plans to use its technology to deliver further handheld devices to make other optical measurements.

Dr Daly told OT: “In the first instance these will include pupillometry and keratometry but other features are on the roadmap.”

The development of the of the device was accelerated following a successful round of investment earlier this year, which raised more than £1m and enabled Occuity to continue product research and development, as well as invest in new appointments.

What price range will the device be in?

The price will be competitive with existing ultrasound meters.

Does it measure intraocular pressure (IOP)?

No, although pachymetry is used in combination with IOP measurement in the diagnosis of glaucoma, our meter is a pure pachymeter. Our patented technology offers other uses and we are of course researching and developing these.

Does it take one reading or multiple?

The meter scans at ~200Hz so collects many scans each second. Multiple readings are collected but the result is displayed as the average of those along with the standard deviation (variability) figure.

Does it require any consumables?

No, that’s one of the main advantages. Being non-contacting, no consumables are required and there are no ongoing costs. This also means there is no need for drops to numb the eye and no need for post-contact cleaning. Additionally, consultations are much quicker, which is advantageous for busy operators. The reduced need for cleaning also means there is no risk of ‘probes’ being damaged, as can happen during the cleaning of contacting ultrasound pachymeters.