Structure and directors of eyewear giant EssilorLuxottica are revealed 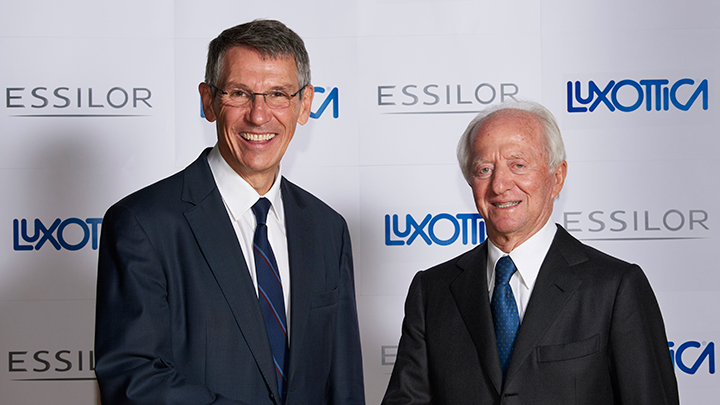 The proposed €46bn (£40bn) merger of Essilor and Luxottica is progressing, with Essilor International taking major steps towards the finalisation of the transaction that was announced on 16 January.

At a meeting on Wednesday (22 March), the board of directors of Essilor International approved the signing of the draft contribution agreements relating to the transfer of the majority of all of its activities and shareholdings to its subsidiary, Delamare Sovra, that will be renamed Essilor International. It also approved the contribution by Delfin of all its shares in Luxottica in exchange for new shares issued by Essilor.

In accordance with what was announced in January, Essilor, the acquirer of the Luxottica shares, will be renamed EssilorLuxottica and will be listed on Euronext Paris. It will also retain its registered office in France. The management structures and teams, particularly financial, of the new combined entity, will be based in France.

Draft resolutions relating to the proposed combination of Essilor International and Luxottica will be submitted for the approval of the general shareholders’ meeting on 11 May.

In particular, the draft resolutions feature the names of the directors who will sit on the board of directors of EssilorLuxottica, as of the closing date of the Luxottica share contribution.

Eight members of the board were appointed by Essilor International, including executive vice chairman and deputy chief of EssilorLuxottica, Hubert Sagnières and Juliette Favre.

Four directors were chosen from the current board of directors of Essilor – Henrietta Fore, Bernard Hours, Annette Messemer and Olivier Pécoux.

Two directors representing employees will be appointed by the Works Council by the end of October.

Changes to Essilor International’s governance, subject to shareholders’ approval, include the appointment of Jeannette Wong, a DBS Group executive, appointed on a provisional basis to the board of directors of Essilor International from 22 March, to replace Benoît Bazin, who wanted to have his term of office terminated. The board thanked him for his ‘significant contribution’ over the past eight years. Also appointed was Laurent Vacherot, president and chief operating officer of Essilor since 6 December.

Discussions concerning the notification process of the transaction to anti-trust authorities are progressing, Essilor revealed this week.