CEO Robin Totterman talks to OT  about receiving the award for a second time, the impact of coronavirus, and how Inspecs has been supporting PPE provisions

From humble beginnings in a Battersea railway cottage, Inspecs’ brand portfolio now includes the makers of spectacles worn by John Lennon and showcased in the Harry Potter films. The Bath business has now been recognised for a second time with one of the highest accolades in UK business, the Queen’s Award for Enterprise.

The Queen’s Awards recognises business excellence around the UK, with the frame designer, manufacturer and distributor receiving the accolade for “outstanding short-term growth” in overseas sales.

This marks the second time Inspecs has received a Queen’s Award, the first time being in 2007.

A lot of people have been working hard to achieve what we have, and this is an official endorsement that what they have done has paid dividends

CEO and founder of Inspecs, Robin Totterman, called it an “amazing achievement, considering we started the business out of my railway cottage in Battersea in 1988."

Mr Totterman told OT: "Today we are celebrating the company’s success as a global business. We have gone through quite a transition.”

The company currently has operations in the UK, Portugal, Scandinavia, the US and China (including Hong Kong, Macau and Shenzhen) and owns manufacturing facilities in Vietnam, China, London and Italy.

Earlier this year, Inspecs celebrated a successful entry to the London Stock Exchange’s Alternative Investment Market, a move that Mr Totterman suggests will help the company “to forge our way in the world.”

Commenting on the Queen’s Award win, Mr Totterman said it has been a great achievement to share within the company: “A lot of people have been working hard to achieve what we have, and this is an official endorsement that what they have done has paid dividends.”

Despite the glowing start to the year, the outbreak of the coronavirus (COVID-19) pandemic has had an impact on the business.

“The outbreak has impacted us hugely,” Mr Totterman commented, explaining that the company may have faced the challenges of the outbreak earlier than most as its factory in China was closed for approximately two months.

After a slow process to re-establish operations in China, COVID-19 then hit Europe, with many customers shutting their doors.

“We then had to decide whether to furlough staff or whether we could do something to help,” Mr Totterman said. As Inspecs already carries and produces safety eyewear, the company began gifting supplies to local hospitals that were short of personal protective equipment (PPE), as well as GP surgeries, clinics and care homes.

The company has received “very sweet responses” from recipients of the protective eyewear, Mr Totterman said, adding: “It makes you realise the enormity of the situation.”

“It got to a point that it became such a full-time project to manage that we had to take a commercial route,” Mr Totterman explained, emphasising, “We are selling the products at-cost, rather than the inflated prices you can sometimes see.” 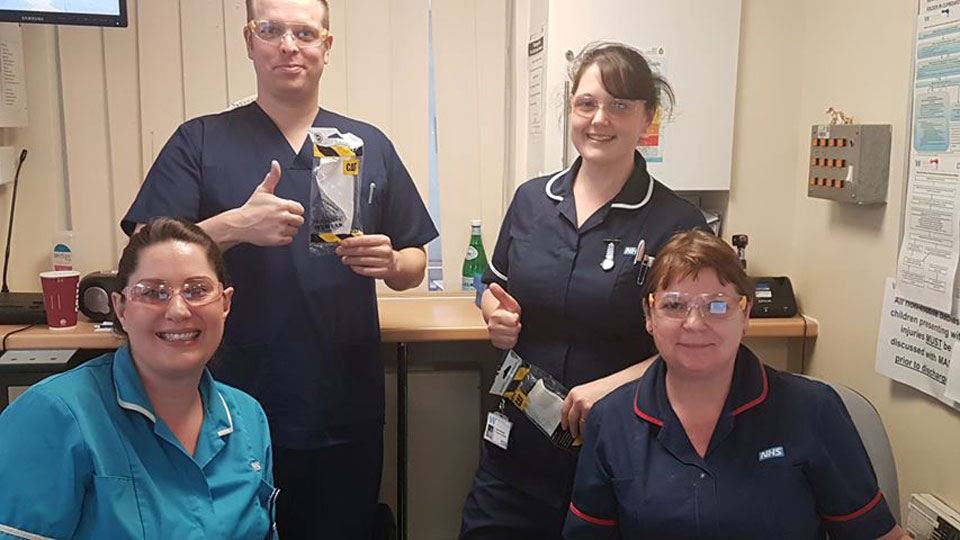 NHS members of staff with their gifted safety eyewear from Inspecs

As a result of the move, as well as reducing operations to a four-day week, the company has minimised the number of staff furloughed, with approximately 12 people from its London factory on furlough leave.

Mr Totterman said: “That was more to do with keeping them safe, as where the factory is based you have to use public transport. Many people had to come from further afield to get there and we didn’t feel that was right.”

Many teams are operating “as normal” while working remotely, he explained, adding that the UK sales force has been completing a variety of tasks: “There are independent opticians coming in for emergency eye care. We can carry on servicing them and will do so to the best of our ability.”

“One reason we decided we didn’t want to furlough is that we feel when we come through this, if people have been involved in the business in whatever way, we are going to have a better run at starting the business again,” he commented.

To date, Inspecs estimates it has produced approximately 60,000 units of the eyewear, and in the next month or two expects to increase this by another 250,000.

“It is not the millions that have been talked about,” Mr Totterman said, but highlighted that of the protective equipment often discussed, “Eyewear is often not talked about.”

While face shields have been produced globally as a “quick solution” for protective equipment, Inspecs took the decision to continue producing its safety eyewear instead.

“There is still a need for the proper safety glasses,” he said, adding: “We want to do this properly rather than jumping on the bandwagon and there are many universities and companies in the UK that are producing the face shields and doing a good job.”

Considering the road ahead

Despite the challenges caused by the outbreak, Mr Totterman reflected: “I think what is quite encouraging is that there is a renewed love for the NHS now, and after this is over I think more people will start to think of a career within the NHS.”

Commenting on the next steps for the company, Mr Totterman described how business is continuing behind-the-scenes with designers working on new collections and with the company also looking at strategic acquisition possibilities.

This is a good opportunity for everyone to think through their businesses and what motivates them, as well as how to drive their business and themselves forward

Having floated on the Stock Exchange, the company is adjusting to new requirements and “a lot of firsts, which mean we are keeping very busy,” Mr Totterman said.

“It is amazing what you can achieve without necessarily being in the same place, but having the technology to be able to feel as if you are in the same room,” he said, suggesting: “As a business I believe we will probably travel a bit less after this experience. Being a global company we are probably one of those who have travelled a little too much, and we can probably do more things from afar.”

“I am pretty sure this will carry on for the next few months,” Mr Totterman said of the outbreak, suggesting that even once the lockdown has lifted “It is going to take quite a few months before so-called normality returns, if it returns on the same basis.”

“But this is a good opportunity for everyone to think through their businesses and what motivates them, as well as how to drive their business and themselves forward,” Mr Totterman commented, concluding, “Keep safe, and ultimately we will get back on track.”