RNIB bus pledge grows as another company signs up 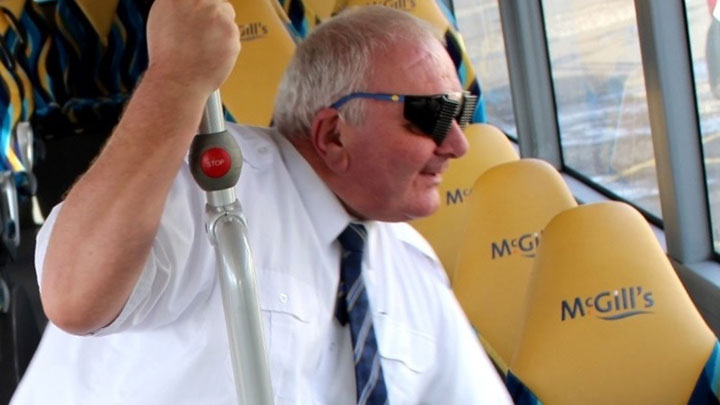 A nationwide campaign to make public transport more accessible for blind and partially sighted people received a major boost on Friday (19 May) when the representative body for Scottish bus and coach operators formally endorsed it.

The Confederation of Passenger Transport Scotland is the latest transport operator to support the the Royal National Institute of Blind People’s (RNIB) bus charter. An official event was hosted at Glasgow's Transport Museum this morning to mark the company’s pledge.

The charter commits transport operators to adjust their services to better meet the needs of blind and partially sighted people. This includes approaching bus stops at a slower speed so that people have time to make out the number and route, not pulling away from stops before passengers with sight loss have found a seat, and letting them know when they arrive at their destination.

After endorsing the pledge, director of the Confederation of Passenger Transport Scotland, George Mair, said: “CPT is delighted to endorse the RNIB Bus Charter. The bus industry is responsible for three-quarters of all public transport trips in Scotland and operates the Government’s Concessionary Travel Scheme. As such, it is hugely important that bus services are accessible to all.”

“Working with partners such as the RNIB helps highlight elements of the journey experience that may be challenging to people with certain disabilities and the Bus Charter is a valuable tool to help make buses more inclusive, easy to use, and welcoming for the blind and partially sighted,” Mr Mair emphasised.

Other companies that have already signed the RNIB Bus Charter include Stagecoach, First Bus and Lothian Buses.