Optical leaders have called on Jeremy Hunt and the NHS to reform eye health services, with the Optical Confederation (OC) insisting that moving non-emergency services into High Street optical practices could solve the current crisis.

A report published by the All-Party Parliamentary Group (APPG) on Eye Health on Wednesday (6 June) highlights that up to 22 people are permanently losing their sight every month as a result of delayed and cancelled hospital appointments for conditions such as wet age-related macular degeneration (AMD), diabetic eye disease and glaucoma.

Chair of the OC, Fiona Anderson, said: “All eye experts have agreed that this is an avoidable crisis and the current eye health system is failing patients on a grand scale. All that is needed is positive leadership and decisive action to end this appointment lottery.

“Moving routine and non-emergency eye health services into optical practices will allow the hospital sector to concentrate on the most urgent and complex cases and reduce avoidable sight loss.”

According to statistics almost 7.6 million ophthalmology appointments were made in England in 2016–17, reflecting over a 10% increase in the last four years.

The report follows an inquiry into capacity issues in eye care and the full findings were shared at a Parliamentary reception for MPs.

The inquiry received evidence from 557 patients and 111 organisations. The report’s call for urgent action to be taken is supported by a number of organsiations including the OC, the Royal National Institute of Blind People and the Royal College of Ophthalmologists, as well as the Macular Society, the International Glaucoma Association (IGA) and Specsavers.

During the inquiry, over half of patients said they had experienced at least one delayed appointment or treatment, with 77% admitting to feeling that this had caused them anxiety or stress, and 54% saying it had a negative impact on their day-to-day life.

The APPG report states that the current failings are fixable if the NHS prioritises eye health and action is taken immediately.

It calls for the Secretary of State for Health, NHS England, the Department of Health and Social Care, local authorities, commissioners, delivery bodies, NHS providers, and Sustainability and Transformation Partnerships to act now on eye health.

This, the OC said, should include assessing all available capacity, mapping that against need and working together to fill the gap. Both the OC and the Local

Optical Committee Support Unit said it would help “in any way it can” to implement the report’s recommendations at a national or local level. 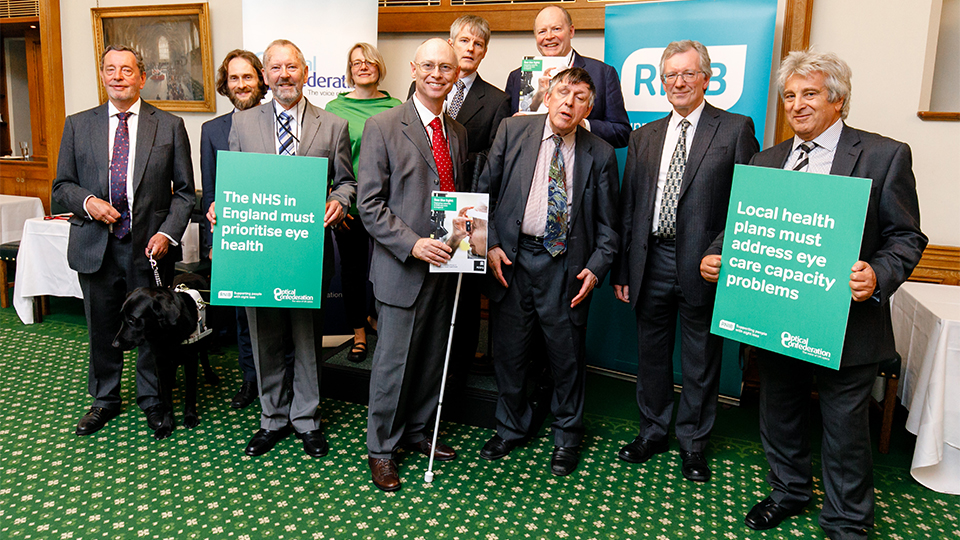 Welcoming the See the light: Improving capacity in NHS eye care in England report, the Macular Society emphasised the importance of taking action on the recommendations.

As a member of the Macular Society, Malcolm Johnson was part of the expert advisory group for the APPG. Diagnosed with AMD and told his sight could deteriorate in weeks, his local eye department were unable to give him an urgent appointment.

The IGA emphasised that “patients with glaucoma have been badly let down by a lack of financial investment, poor policy decisions and chaotic communication and administration systems.”

The Association highlighted that its own research has found that more than 20% of its members have been affected by cancellations or delays to follow up appointments, while some have even paid for private healthcare in order to avoid delays.

The IGA agreed with the report’s recommendation for an NHS tariff review and said that the financial imbalance between first and follow-up appointments needs to be addressed. “The creation of a two-tier health system is unacceptable and against the founding principles of the NHS,” a statement released by the IGA read.

Attending the event, Specsavers’ director of professional advancement, Paul Morris, welcomed the report and said: “In particular we welcome the focus on the need for service redesign and the recognition of the role that local optometrists can play right now in alleviating the pressure that hospitals are under.

“There are already some great examples of optometrists providing advanced eye care services on behalf of the NHS in accessible locations in the community.

“Together with RNIB, we will continue to champion the role of optometrists in preventing avoidable sight loss by providing eye care in the community.”

Chief executive of the Macular Society, Cathy Yelf, added: “It is a tragedy that people lose sight when there is a treatment that will help keep their vision longer, but it is not given in time. The impact of losing your sight is huge, not only on the individual but also on their family. It is so important that the recommendations in the report are implemented in order to ensure people are getting the eye care they need.”

In responding to the report, the Macular Society highlighted the need for a higher level of investment into eye research, which it said would “alleviate the burden on the NHS in the long term.”

Ms Yelf stressed: “AMD is preventable and represents a huge cost, care and social burden, yet we know it does not receive a level of research funding proportionate to its impact.”