Women garment workers in Bangladesh are at a heightened risk of poverty due to lack of eye care even when other factors are accounted for, according to Orbis International.

Addressing near vision impairment that leads to lower monthly salaries for female garment workers could reduce poverty and gender inequality in the country, the charity said.

Orbis has revealed that female garment workers suffer from high rates of near vision impairment, which was associated with earning a lower monthly salary, even after adjusting for factors including years on the job and daily working hours. The findings are particularly pronounced in rural areas.

Half of Bangladesh’s four million garment workers are women, and the country is home to the second largest garment industry in the world, after China. High rates of near vision impairment are already present among women aged 30-35.

The nature of garment work requires the ability to see up close, making good near vision essential for those working in the industry. Garment production accounts for over 80% of Bangladesh’s export earnings. 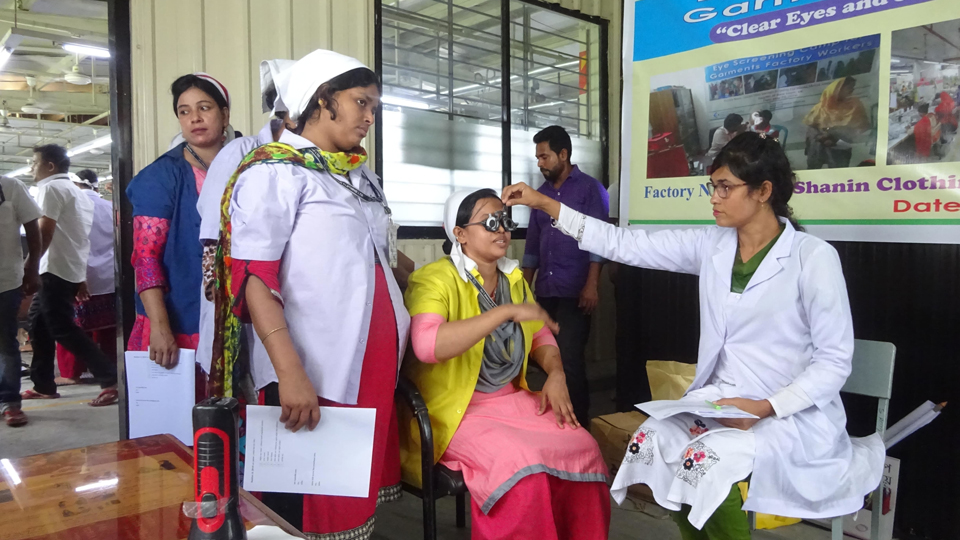 An Orbis study shows high rates of near vision impairment among female garment workers in Bangladesh
Orbis highlighted that fighting preventable vision loss in industries with a high proportion of female workers is a way to combat the adverse economic impact of gender inequality.

The report, published in the Asia Pacific Journal of Ophthalmology, highlighted that solutions including workplace screenings and the provision of glasses could reduce wage inequality, and in turn reduce rates of poverty.

Women and girls make up 55% of people with vision loss globally, and women often require correction for near vision loss at an earlier age than men.

Munir Ahmed, country director for Orbis Bangladesh, said: “Given that women constitute the majority of workers in the garment industry globally, the study offers evidence that increasing access to quality eye care can help increase earnings among female workers and has the potential to pull more women out of poverty.”

He added that the “findings and proposed solutions are relevant across other industries with a high proportion of female workers as well.”

Near vision loss is often inexpensive to treat, and in most cases only requires a pair of glasses. Orbis estimates that treating a garment worker in Bangladesh could increase earnings by around $70 (USD) per year.

$70 is equivalent to six weeks of income above the World Bank’s poverty line. Based on UNICEF estimates that the annual cost to raise a child in a developing country is $900, $70 is also sufficient to cover nearly a month of expenses for one child.

Lead image: A female garment worker in Bangladesh is screened during the study in 2019