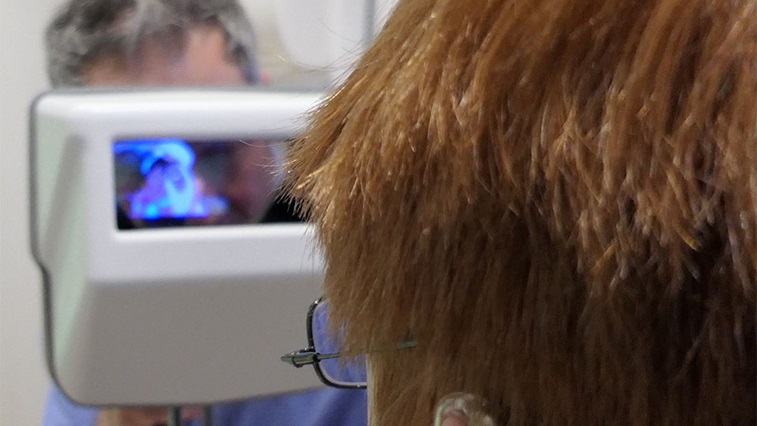 A Durham independent optometrist has developed technology that can help to make the sight test a more pleasant experience for those with learning disabilities and dementia.

Simon Berry, inventor of the Optimec Visual Fixation System, highlighted that the device can be helpful with any patient who has difficulty engaging in a sight test.

“It is about making the eye test a nicer experience. It can be quite scary going to an optician and this should make it a little bit more pleasant and relaxing,” he shared.

The device allows patients to watch a video while having their eyes tested. It was launched at the SightCare Conference in 2018 and is being trialled through Aston University, Cardiff University, the Association of British Dispensing Opticians and SeeAbility.

Mr Berry explained that the Optimec Visual Fixation System was initially developed to measure accommodative lag in children with down syndrome when performing dynamic retinoscopy.

“It is the only device on the market that can measure the accommodative status whilst using a target on the visual axis and may also prove useful in the field of myopia control,” he said.

“It can also be used for other clinical tests such as cycloplegia refraction, indirect ophthalmoscopy and some dispensing measurements,” Mr Berry added.

He shared that patient feedback to the device has been positive so far, sharing the story of a mother who visited his practice after trying unsuccessfully to have her autistic son’s eyes tested at the hospital.

“I used the device and he was absolutely fine in the eye test,” Mr Berry highlighted.

“The mother just burst into tears because it was the fourth appointment that year and he had never been able to co-operate,” he added.

As well as being useful within optometry, Mr Berry shared his belief that the device could help in other disciplines such as paediatrics and dentistry.

A prototype device was developed in collaboration with Durham University after Mr Berry came to them with the concept.

“It is a simple idea, but it works. I sketched different things out then I contacted Durham University and said, ‘This is what I want do – is it possible?’ They told me how I could do it,” Mr Berry said.

A wider rollout of the device is planned for 2019 following feedback from the initial trial.