Nine in 10 optometrists called for more stringent rules around vision and driving in this year’s Voice of Optometry survey. The AOP’s Serena Box discusses the findings behind the AOP’s latest campaign 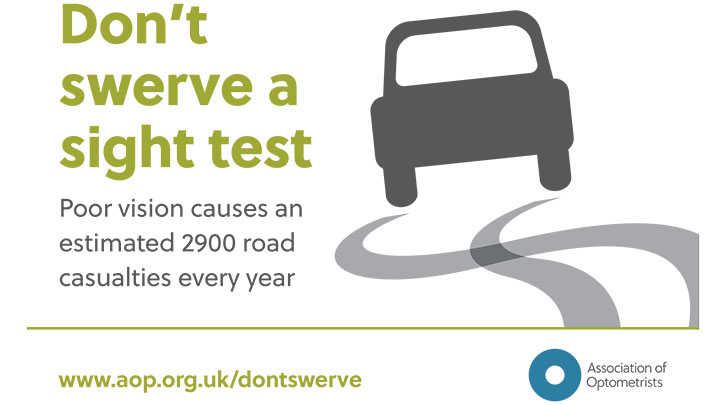 Vision standards for driving is a natural discussion point within the optical sector – one that has been fervently debated and, at times, perhaps unsurprisingly, provoked some contention over the years.

When you appreciate the complexities behind the subject, there’s no mystery as to why it generates a plethora of views. Not only does that discussion involve navigating legislative and practical intricacies, but it also often takes place against a backdrop of human tragedy, making it a difficult and emotive area.

In March 2017, following the poignant case of Poppy-Arabella Clarke, a three-year old killed by a motorist, weeks after he was warned his vision was too poor to drive, the AOP felt it an important time to consolidate and clarify our views on vision and driving.

One of the most striking findings of our recent Voice of Optometry panel survey was the consensus of more than 1000 members on the subject of vision and driving. With more than one in three of those surveyed reporting they’d seen a patient in the past month with vision below the driving standard, many felt there was a need for more stringent rules. Nine in 10 of respondents concluded that the current sight requirements for a driving licence are insufficient and the same amount called for regular sight tests for all drivers. Eight in 10 also called for a full sight test for new drivers.

Echoing these views, our position statement, published in July, contended that the present UK system, which relies on self-reporting and an initial number plate test, is inadequate. We are now going one step further, launching our inaugural Don’t swerve a sight test campaign – designed to increase public understanding of the connection between poor vision and road accidents.

The premise of the campaign is to remind motorists that good eyesight is a crucial part of being a good driver – but often overlooked. Behind the campaign is a very serious message, but we wanted it to have an approachable tone with a message that is easy to understand. By having a regular sight test every two years, and getting the right vision correction, motorists are taking a positive step to being a safer driver. With that in mind, we’ve been working with leading road safety charity IAM Roadsmart, whose ethos is centred around improving road skills through their advance driving courses. To help drum up awareness, IAM Roadsmart, who have a network of 90,000 members and 200 local groups, have committed to sharing our campaign messages through their channels.

This month will see the launch of a series of materials that support our media campaign – targeting national, trade and online press. Our advice video, new patient leaflet, and digital assets including infographics and social media images will heighten public awareness but will also help position the AOP as a go-to resource on vision and driving safety for the future.

How to get involved

We’ll be targeting national media to urge drivers to take a sight test in the run-up to Road Safety Week, which takes place from 20–26 November. But you can support our campaign now by downloading our materials and sharing it through your own channels from the 15 November.

AOP members can host one of our Don’t swerve a sight test campaign banners on their website or social media channels, which were sent, via email, in October, or can be downloaded from our website.

More on driving and vision