There is currently no requirement in the UK for drivers to have regular sight tests. Roadside tests have shown that many drivers subsequently fall below the required standard as their eyesight changes over time, often without them realising it.

The AOP is fully committed to increasing public awareness in this area, and as a result we’ve been ramping up activity to put the issue of good vision and road safety in the public domain.

For the second time, the Optical Confederation (OC) joins forces with charity Brake for its annual event Road Safety Week – which is the UK's biggest road safety event involving thousands of schools, organisations and communities. This year's theme is ‘Make the Brake Pledge,’ and focuses on six simple elements to make our roads safer – with sharp vision being one of the vital checks for drivers.

"The campaign urges drivers to take a sight test this Road Safety Week, but also reinforces the message that drivers should be having a sight test every two years, or more frequently if advised by an optometrist"

As a founding member of the OC, the AOP is leading on the campaign to highlight good eyesight as a crucial part of road safety. In the November issue of OT you will find our Road Safety Week poster, which couples the sight test with the common driving instruction ‘Mirror, signal, manoeuvre.’ The campaign urges drivers to take a sight test this Road Safety Week, but also reinforces the message that drivers should be having a sight test every two years, or more frequently if advised by an optometrist.

We are calling on optometrists across the UK to support the campaign by displaying this poster in their practices. The poster will be further supported by sector and national press releases.

We are also promoting the OC advice sheet ‘Vision – Key Facts for Drivers’ which helps people understand the issues around poor vision and driving performance.

Working with Direct Line and The Daily Telegraph

Building further on this activity is our recent work with Direct Line to urge drivers to have their sight tested regularly.

To communicate the message in a powerful and tangible way, optometrist Henry Leonard, clinical and regulatory officer at the AOP, worked with a journalist from The Daily Telegraph to demonstrate how visual impairment can affect driving ability. 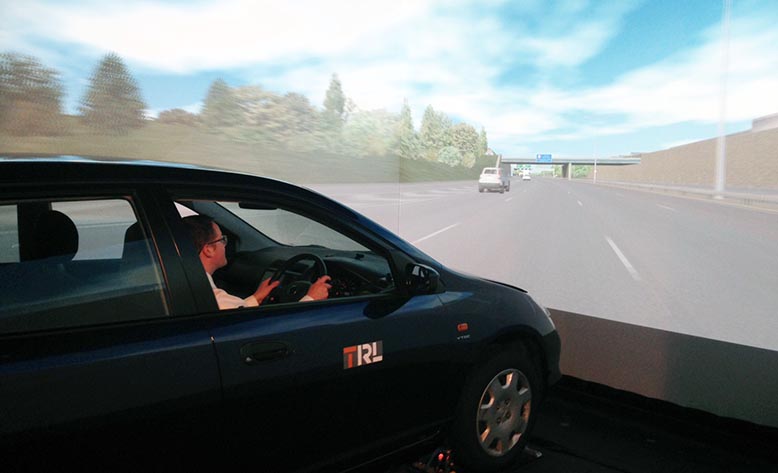 At the TRL transport research centre, using a driving simulator, Henry was able to impair the journalist’s vision to varying degrees to test the impact on speed and reaction times. Starting at the legal minimum standard, he worked backwards to simulate what it is like to drive just below this and then with glaucoma and cataracts. The experiment had startling results and was reported in The Daily Telegraph with a call to action to introduce stricter rules around sight tests for drivers.

This year’s Road Safety Week takes place on 21–27 November, and we’ll be continuing to urge drivers via our social media channels to take a sight test. We are asking for your help to spread the word by sharing our Twitter and Facebook posts. Get involved by finding us on Facebook or follow us on @The_AOP and using the official Road Safety Week hashtags #brakepledge and #roadsafetyweek.

Serena Box joined the AOP as its PR and media manager this year, having worked for the Health Research Authority in a media and communications role.

More from The AOP