Finding new, smart and direct ways to get the media to talk about the importance of children’s eye health is a challenge worth embracing

The connection between The Jungle Book, bookworms and laser pointers may not be an obvious one, but all three have been in the news recently, and link to comments the AOP has issued to help highlight a really important issue – children’s eye health.

Alongside our focus on producing children’s campaign materials for members – set to launch this month – the AOP is committed to raising awareness with the media about the need for children to have the best eye care possible – and doing so by linking to the news agenda.

How do we achieve this? Earlier in the year we used World Book Day as a hook to explain why a trip to the optometrist might help young bookworms. Supported with a new blog, and well received social media, our updates highlighted why people shouldn’t let poor vision get in the way of a good read.

Our social media posts for World Book Day and World Book Night – encouraging parents to take children for a sight test – were seen over 12,000 times across Facebook and Twitter, with our top Facebook post on the subject reaching an audience of 2373 people.

The bare facts about 3D

Promoting sight tests as one of the ‘bare necessities’ of life, we issued a story in April about children’s vision and 3D films, timed to coincide with Jon Favreau’s remake of The Jungle Book. Supported by a new 3D video with tips for the public, we utilised the release of the much-anticipated film to help raise awareness of children’s vision and the importance of regular sight tests.

"Over the years, I've heard so many heart-warming stories from parents about the huge impact a visit to the optometrists has had on their child's life"

Speaking about the warning signs for parents to look out for, AOP clinical and regulatory officer, Henry Leonard, was on hand to explain that the short-term effects of 3D viewing are the same for adults and children. “If a child doesn’t see the 3D effect, or experiences dizziness, headaches or visual discomfort – it’s time to visit your optometrist, at your local opticians," he said.

Our story was picked up in local and national press, with widespread coverage including articles in the Telegraph, i, London Evening Standard, Metro, Mail Online and Yorkshire Post. It was also covered further afield, including Turkey’s Istanbul Daily News and the US’ Detroit Newstime, plus it achieved widespread coverage in Australia.

Our social media updates on this story attracted lots of attention with 3099 unique views of our Facebook post highlighting the issue. Overall our updates on the subject were seen over 10,000 times on Facebook and Twitter. 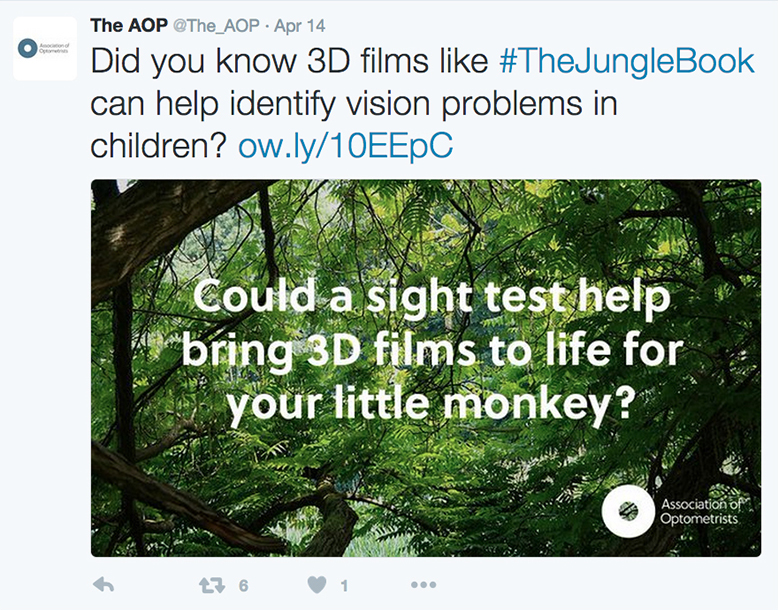 Moving on from the jungle, our 3D activity was followed by an interview on the dangers of laser pointers. We’ve been concerned about inappropriate laser use for some time and new research published in the British Journal of Ophthalmology gave us a useful opportunity to talk again about the dangers to children.

Our chairman, Kevin Thompson, was interviewed on Capital Radio and LBC, following news that an estimated 150 children in the UK have suffered eye injuries from laser pointers since stronger devices hit the market eight years ago.

More than part of the day job

Over the years, I’ve heard many heart-warming stories from parents about the huge impact a visit to the optometrist has had on their child’s life. We’ve interviewed many patients, and the overwhelming message that comes back is: “I just didn’t realise that my child couldn’t see properly.”

Seeing how practitioners make such a significant contribution to the lives of others is one of my favourite things about working at the AOP. Members have, often very humbly, mentioned that this crucial intervention “is just part of my day job.” However, as a non-clinician, for me it has always been a big thing. And it’s usually one of the first things I mention when asked the question ‘what is an optometrist?’

We’ll be continuing to raise awareness of children’s eye health throughout the year – so watch this space, there’s more to come. And if you don’t already follow us on social media, remember to share our updates with patients and colleagues. Every time our stories are published, someone new, somewhere, will learn about the importance of sight tests. And that’s certainly one of life’s bare necessities.