The reasons for flying the green flag in optics are lusher than ever, according to the sustainable innovators in the industry.

Charmant told OT that it is constantly looking at the most environmentally friendly manufacturing processes to reduce its environmental impact.

Its Esprit eyewear brand launched the ECOllection in August, an eco-friendly range that is made from castor oil. The oil is extracted from the beans of the castor oil plant, which does not compete with food crops as it can be grown on poor soil in the tropics and Mediterranean.

The optical frames are formed through a process of melting and moulding, and the metal components are reduced to just the necessary screws and inserts on the arms for adjustment purposes.

However, general manager at Charmant, Louise Brunton, explained to OT that reducing the environmental impact of the company isn’t the only benefit and that selling green credentials can boost business. “All consumer goods are a trade-off between necessity and the exploitation of natural resources,” she explained.

“Depending on how green a customer’s viewpoint is, the knowledge that buying a product that does not compete for land and is also sustainable may well encourage them to purchase a pair of spectacles that they see as being ecologically friendly,” Ms Brunton added.

Founder of Komono, Anton Janssens, added that for customers to take the all-important step to actually purchasing environmentally friendly frames, sustainability has to be married with fashion. “Sustainable intentions alone won’t make the impact. We have to provide fashion benefits alongside the environmental,” he reasoned.

This, he said, was the aim with Komono’s Neutro series, which produced surprising results during the production process. “We’ve replaced the fossil oils typically used to produce plastic or acetate frames, and temples, with lower carbon footprint organic oils derived from the castor bean. We realised that this process has a visible side effect – small glittering particles suspended through the injection,” he enthused.

“We chose to view these particles as a unique design feature, taking inspiration from the fiberglass furniture popular during the 1970s and selecting Komono sunglasses styles that would complement this texture,” Mr Janssens continued.

The Komono founder highlighted that there are many practical benefits to choosing sustainable eyewear, such as it being more lightweight and stable, as well as having improved UV resistance. But Mr Janssens said it is the long-term benefits that carry the biggest appeal for the company. “When you design with sustainability as a goal, you can be satisfied that you are helping to create a better world and that you are part of the solution,” he explained

“When we use 70% bio-polymer in our injection moulds, we reduce the carbon footprint of our production process by a staggering 80%,” he added.

Specsavers is another company that has coupled green-thinking with fashion, with its “earth-conscious” range, Eco. Each frame is constructed from recycled or biodegradable acetate. The multiple detailed that the frames have an “earthy colour palette with Scandinavian design.”

However, sustainability is also being achieved across optics in manufacturing processes and company initiatives. 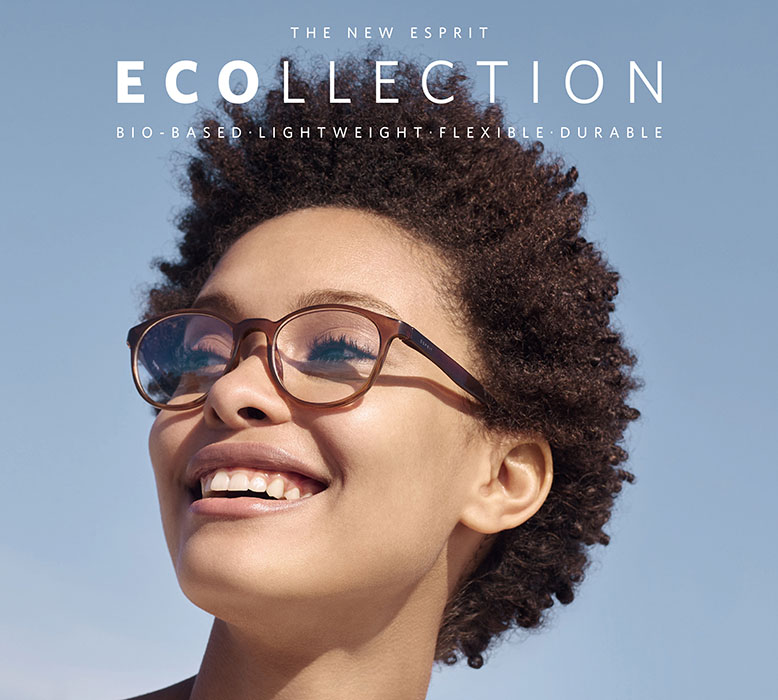 The glazing facility is housed next to its lens distribution arm, Lens Online, and its sister company, Vision Labs, which cuts down on the need for transport, reducing costs and emissions.

The site uses solar power to generate 38,000kWh of power for factory use or to sell back to the national grid, saving £7000 a year. Thermal solar panels provide hot water for the building and rainwater is harvested for the toilet system, saving £1500 a year. A total of 11,000 litres of grey water is used a week, which is double the amount of mains water brought into the building.

Mr Hughes said: “The next step is to establish the baseline of energy usage when it is empty and optimising energy usage at maximum capacity through more metering. For example, some machines may be running all the time but the lights can go off. The factory also runs more processes when IGS’ own solar panels are producing power.”

Essilor is also making efforts to make its lenses greener with initiatives focused on reducing the use of vital natural resources. “Essilor launched its global Reboost programme in 2013, which aims to define and roll-out group performance standards and speed up reductions in water and energy consumption, along with associated field projects, to reduce the main environmental impacts,” corporate social responsibility director for Essilor UK and Ireland, Nigel Corbett explained.

Under the programme, Essilor requires each region and facility to define its own water and energy roadmap, which is overseen at group level.

A centralised budget is drawn from for investment into new processes and equipment, such as smart metering and its Alloy Replacement Technology (ART) Blocker. ART Blocker, which was launched by Satisloh, a subsidiary of Essilor, makes use of a universal and re-usable organic block-piece and a UV-curable adhesive rather than alloy. The use of organic material eliminates heavy metals, makes it safer for staff to handle and is better for the environment.

As well as ensuring business continuity by mitigating its risks, green initiatives also allows Essilor to cost save in the long-term. “With our investment in reducing water and energy consumption, we have seen a decrease in operation costs since the programme’s launch,” Mr Corbett said.

“As a social purpose driven company and an industry leader, with our mission to ‘improve lives by improving sight’, we have the responsibility, and are proud to take it, to lead positive impact on our industry and the society,” Mr Corbett concluded.