Support in the community

When Vera Henning walked through the doors of Anne Gill Eyecare, she had given up reading, sewing and watching the television because of poor vision.

She also purchased a Galilean system, mounted to a frame, with additional lenses for specific tasks.

Practice owner, Anne Gill (pictured below), told OT that after her appointment, Ms Henning was able to sew up the hem of her jeans.

“For her, that small act of independence meant so much,” Ms Gill said.

“She came back in later and said, ‘You have changed my life’,” she shared.

Other patients who have received assistance through the scheme have been given the ability to read their letters again, rather than relying on a family member.

It’s not the big things – it’s the small things that, as an adult who can see well, you take for granted

Ms Gill recalled a gentleman who wanted to be able to sit and read a book to his young grandson.

“We have managed to achieve that. It’s not the big things – it’s the small things that, as an adult who can see well, you take for granted,” she observed.

“Helping someone with a low vision aid gives them back independence,” Ms Gill said.

She estimates that between two to four patients are assisted through the low vision scheme at her practice each month. 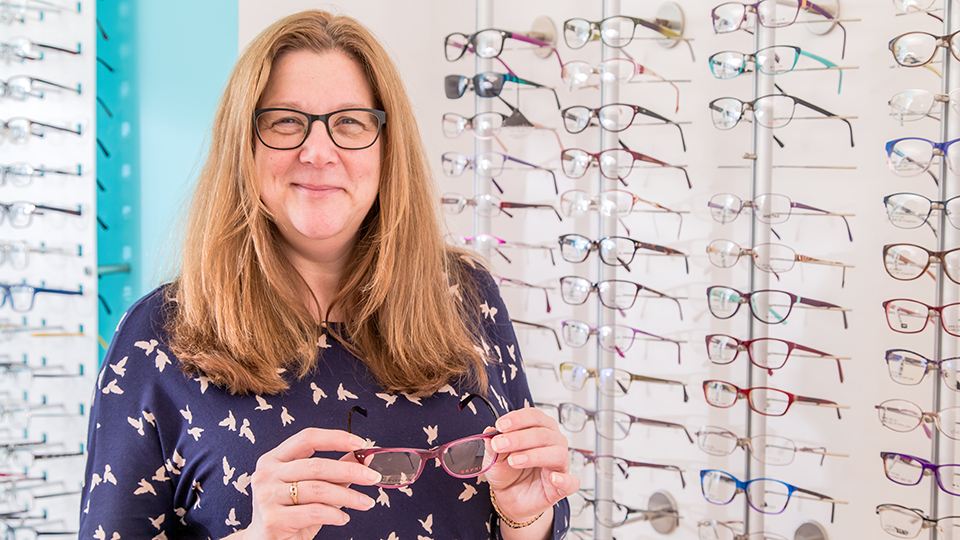 Ms Gill would like the number of patients seen through the scheme to increase. She has been proactive in raising awareness of the service by speaking with GPs and practice nurses, as well as hosting low vision days where patients and their family members can drop in to find out about the service.

“In Portsmouth, we have over 7000 people with AMD, but last year only 125 were seen through the low vision scheme across the whole of the city,” she said, adding that people are unaware that the service exists.

Ms Gill believes that in the future, services like Portsmouth CCG’s low vision scheme will play an increasingly important role.

“We are all living longer. I think the hospitals are often unable to offer the low vision service as they are so busy. It is often easier for the patient to receive the service out in the community. We have the ability to provide this but we are underused,” she emphasised.