My first degree was in Medical Biochemistry. I had a close friend who was studying law, and I would often discuss their studies with them. It must have piqued an interest because after I had completed my degree I took the decision to enrol on the law conversion course. I was keen, however, not to waste my first degree and what I had already learned, as I still had a keen interest in medicine and health. I decided that I would focus on getting a job in healthcare law. As well as that, both my Mum and my sister are nurses, so I also decided early on that I wanted to be involved in defending healthcare professionals like them – not prosecuting them.

I joined the AOP as a legal services assistant after law school in 2005, and then worked as a trainee solicitor before qualifying in 2007. At the time when I joined, we were a much smaller team of five, including one clinical adviser. Today, we are a team of 12, including two clinical advisers. We also work closely with our colleagues in the regulatory department, which helps a lot.

The majority of my time is spent assisting members in responding to fitness to practise (FTP) investigations by the GOC. This will either be in the early stages of investigations where they will be asked to respond to the allegation in writing, or in preparing and attending hearings before the FTP committee.

What makes the AOP’s legal service different from the other options available is that we have expertise in-house. Some of the other professional bodies that I am more familiar with will outsource their legal services so you may be dealing with someone in a private law firm instructed by their insurers. With the AOP, it is quite possible that the person you speak to when you first call the AOP is the very same person who will assist you all the way through to the conclusion of your matter. It is that in-house expertise and personal service that I believe makes us unique and sets us apart from the other options available.

Most matters start with a patient complaint, but allegations can and often are raised by NHS bodies, employers and sometimes, although less common, other optometrists. Then there are also matters relating to health or matters of a more personal nature that would still fall under the remit of the GOC and NHS bodies. It is fair to say we have a very varied workload, which I find is one of the most interesting aspects of the job. 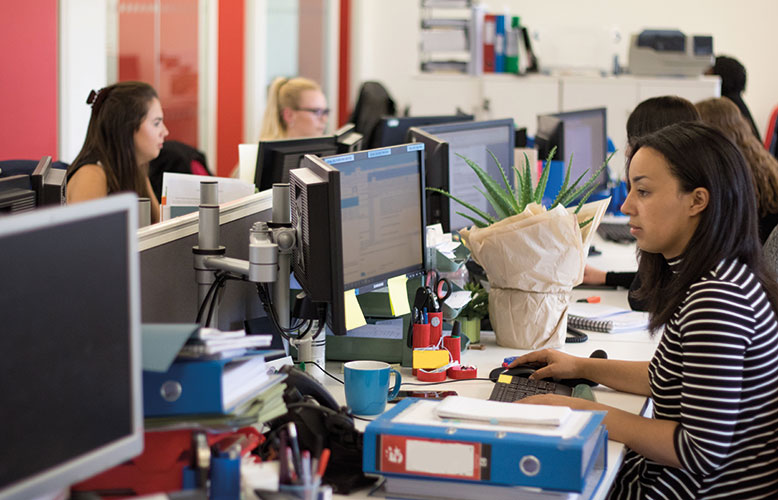 The most rewarding element to working as a solicitor has to be helping people when they most need it and getting the right result for them. I also enjoy being able to foster good relationships with our members. Along the way so they feel able to return to me in the future if they have another query. We are able to draw from a significant background of expertise, both legal and clinical, so even if the question is unique or complex, and I don’t know the answer immediately I will always know someone who does. Hopefully, my colleagues and I are that much-needed reassuring voice at the end of the line. We are able to give both legal and often practical advice, but also then take over management of the matter when it becomes necessary and take some of the stress away from our members. It’s why we exist.

I think the most rewarding case for me was a student member who made a mistake as a pre-registration student. She didn’t have the right support around her, and didn’t feel able to ask difficult questions of her colleagues. As a result, she suffered a significant setback to becoming a fully-qualified optometrist. When she eventually got in touch with the AOP, we became her voice and it meant she was no longer dealing with this huge issue alone. Instead she was supported all of the way. We have kept in touch over the years and I was elated when she finally came through the other end having qualified.

I would have liked to have had an opportunity to speak to her when she had first got into difficulty as some of the delay she experienced might have been avoided, but I was glad to be able to help when she finally did reach out to us. She is a good example of how we can help our members, particularly those just starting out in their careers, and the importance of getting in touch at as early a stage as possible.

AOP membership is invaluable. My colleagues and I witness on a daily basis the stress and upset caused by even the most straightforward of complaints. I also know how hard we work to protect our member’s interests.

Ella on… The GOC

"The GOC’s approach can seem very inflexible and I think that is an accurate way to describe many other regulatory procedures too – but there is a reason behind it, namely consistency across regulators. I know first-hand that our members feel the way they are treated is a personal reflection on how the GOC view them as individuals, whereas my view is that the process is almost the opposite; it is very impersonal with not enough emphasis placed on the specific facts of each case. I would like to see greater discretion to enable the GOC to decide matters on a more case-by-case basis. In particular, I would like to see the GOC rules changed to allow voluntary removal from the register for retired members and more use of undertakings, powers which other regulators have. That would hopefully avoid some of the more long drawn out investigations for retired members who no longer practise and have made that decision prior to any complaint being received, but are then held on the register for administrative reasons. Another area which could have some benefit for our members is consensual disposal of cases."

Behind the scenes with the AOP legal and regulatory team

While maintaining each of our individual caseloads, the team is likely to see over 20 new enquiries coming in via email and telephone.

• About a fifth of employee respondents said they felt "very" or "quite" comfortable about raising "fitness to practise" concerns with their employers, while around twice that number would feel "very" or "quite comfortable" about contacting the AOP.

Our solicitor, Christine Rowan, and paralegal, Lauren Barnie, will be looking after calls that are coming in from AOP members. Lauren will also be attending to the email enquiries from members. The enquiries typically range from advice sought in relation to non-tolerance issues, student funding for university, requests for patient records and to various employment related issues.

We have two solicitors out at the GOC for hearings with AOP members. One is a substantive hearing, while the other is an interim order hearing. Both solicitors’ presence at the GOC is going to be required for the entire day – a common situation – while they represent our members alongside instructed counsel.

Our employment counsel, Heidi Blakey, is dealing with employment matters with assistance from paralegal, Chloe Hucker. Clinical advisers, Henry Leonard and Farah Gatrad, are on hand to respond to regulatory matters.

Gerda is heading off to chambers in the afternoon for a conference with one of our members and counsel. Conferences with counsel and our member’s often require a considerable amount of time. Crucial details of matters are explored and a plan of action for matters such as GOC hearings are set and agreed with members

Who’s got your back?

For more information on the AOP's Who's got you back? campaign and to listen to member stories, visit the AOP website. For AOP legal and regulatory advice, contact 020 7549 2020.