AOP lifetime member, Harry Green, speaks to OT  about the profession since he started practising in 1953, and the Association’s role

What are your thoughts on the AOP’s 70th anniversary?

How did you feel receiving your certificate of merit to the AOP in 2009?

I was very honoured about that when I retired. We were having a dinner at a restaurant and all of a sudden, it was presented to me. It’s nice to be appreciated. 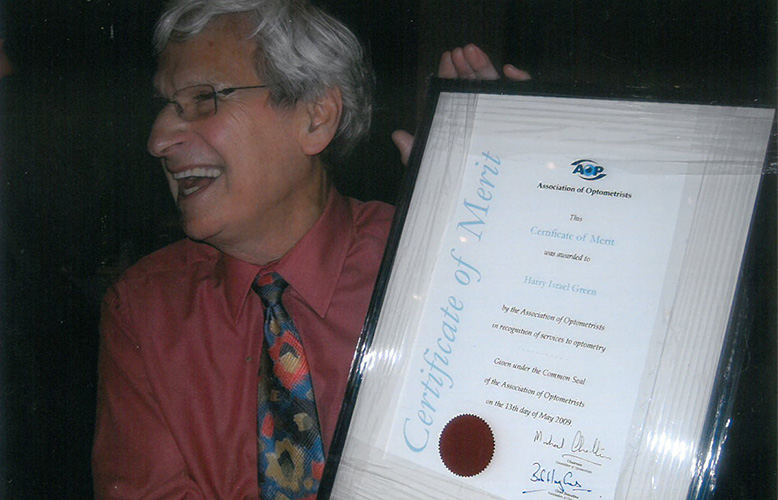 How did your optometry career start?

After I came to London around about 1950, I joined the Royal Air Force (RAF) as an optometrist. I’d just qualified then, though I couldn’t practise as I had to wait until I had done my pre-reg year. I got all that done in the RAF, and it was marvellous in its hospital. I wanted to do hospital work, but in those days it didn’t pay anything. I started my own practice in Highbury [London] in 1953.

What are the biggest upheavals you saw over your over 50 years in the profession?

There’s two sides to optometry – clinical and commercial. My view was to keep the clinical side of things front and centre – and more of the profession was in favour of this too.

I didn’t believe in shop windows, you see. My practice looked more like a dental practice. It was still in a shop premises, but I didn’t have any displays. I believed that was the way to practise.

[At the time] The British Optical Association (now the College of Optometrists) was trying to get rid of window displays. It was going to phase it down, but that all fizzled out with commercial realities.

The first in-store practice I can remember was in a Debenhams, and we got a shock.

What are your stand-out memories of being an optometrist?

I loved my practice and I loved my patients. They became friends. Every Christmas, even now, we exchange Christmas cards and New Years greetings. I play violin as an amateur, and a violin was bequeathed to me by one of my patients.

You saw them, their children, and their grandchildren. I think the important thing is to keep that relationship. I miss it a lot. 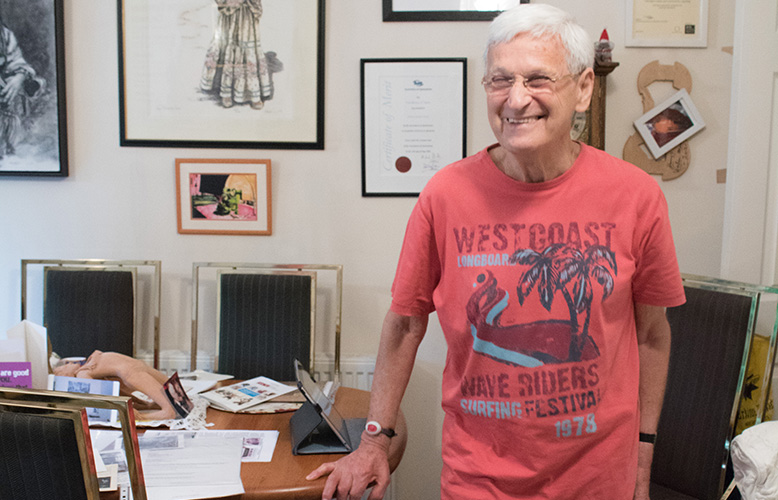 Tell me about some of the major developments during your career.

I was one of the first people to correspond with the inventor of the soft contact lens. The inventor was a Czechoslovakian professor, Otto Wichterle. I’d heard of it through the grapevine – someone came up to me at a conference and said they’d heard about a contact lens that you don’t feel. Mr Wichterle sent me over some samples, and they were tremendous.

The first contact lens I ever fitted was acrylic. In those days, when you fitted contact lenses, there was so much skill in it – you had to be so precise as there was no flexibility to it, within a fraction of a millimetre. We had to take impressions of the eye, and they were big contact lenses. You were lucky to get seven or eight hours of wearing time.

When the soft lenses came in, there was an explosion, because anyone could fit them as the lens could adapt itself to people’s eyes.

What would you like to see for the AOP and the profession over the next 70 years?

In America, optometrists were always called doctors, as a courtesy, and we have never achieved that. I would have liked to see that here as well.

A long-time member of the North London Association of Ophthalmic Opticians, optometrist Harry Green served as secretary, vice-president and president of the Association, which become the Association of Optometrists. Also taking the roles of chairman for 25 years for the Camden & Islington Local Optical Committee and secretary towards the end of his career, Mr Green helped to establish the British Contact Lens Association, and was presented with a BCLA honourable fellowship to recognise this contribution. He was also the president of the British chapter of the American Academy of Optometry. Mr Green is retired and lives in London.

Read about what AOP members visiting this year's Optrafair had to say about how the Association has contributed to their careers.