Optometrist and practice owner at Reynolds Opticians, Marcus Slater, speaks to OT  about the importance of eye health

“Eye tests are fundamentally important for the screening of general health conditions such as diabetes, high blood pressure and cholesterol, as well as what people normally think eye tests are for and that’s testing your sight,” he explained.

The independent operates at least 30-minute testing times, but admits that there is no such thing as a standard sight test at Reynolds Opticians – the test is adapted to the patient’s needs.

“We really like to get to know our patients and build up a good rapport with them. We like to start with a relaxed open conversation in order to establish their visual needs, and also to make sure that we do tests that are specific to their problems,” he shared.

“A lot of patients think they might do something wrong or give us the wrong answer, which you can’t do. Clearer with one or two is not clear cut and if you don’t know the answer, it’s okay to say you don’t know and we can reword the question,” he explained.

When asked about the terminology used in practice, Mr Slater explained: “We refer to it as an eye examination because we do more than test your sight. That is just one of the many things we do. Our examinations will detect general health conditions, but also the technology that we are using is examining your eyes, not just your sight.

"A lot of people think they come to the opticians, look at a letter chart and that’s all we do, but we don’t"

Mr Slater believes that the public is not educated sufficiently enough about the importance of a sight test. “A lot of people think they come to the opticians, look at a letter chart and that’s all we do, but we don’t,” he said and stressed: “Even if a person’s vision is perfectly clear, they should still come and have their eyes tested as we can pick up so many different things.”

Informing and educating the public has been a focus for Mr Slater and his optometrist wife, Sophie, since taking over the practice.

Through this they prompt that optometrists do more than test sight and highlight that an eye test is not a painful process, but something that the public should have done regularly to make sure that they are fit and healthy.

Having recently tested Mr Brough’s sight during the consultant’s first eye test, Mr Slater acknowledged that a sight test can be nerve-wracking “but there’s no way around it,” he said, “you should book an eye test at your opticians, ask questions and go and have it done – it really doesn’t hurt.

“Most people have ‘normal’ eyes, most people don’t have anything wrong with their eyes, but if there is a problem the sooner it’s detected the better the treatment outcome is,” he highlighted. 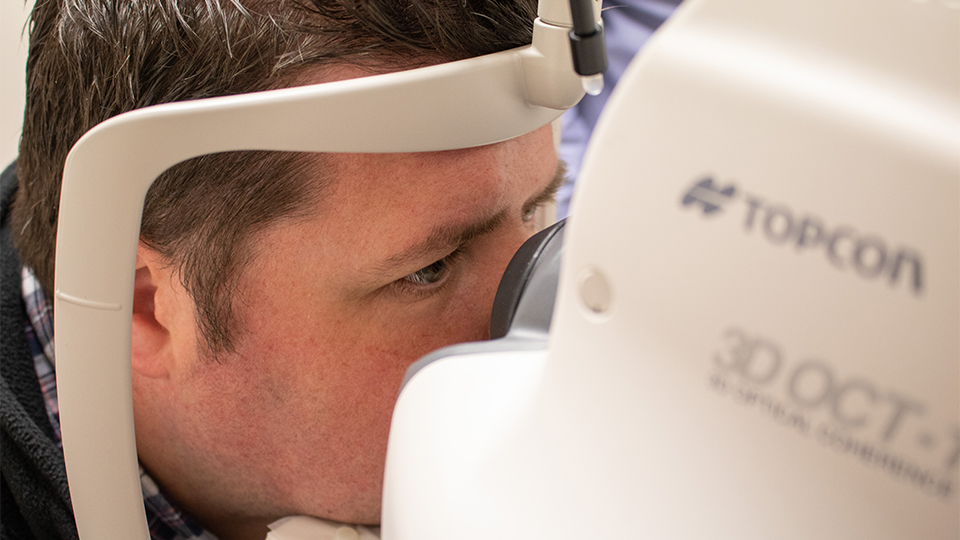 In order to raise public awareness of the importance of a regular eye test, Reynolds Opticians ultilises social media. “We are big on Twitter, Facebook and Instagram, they are our main ways of getting new patients into the business, which is working well,” he shared.

While the practice’s main patient base is over 60 and over, it also has a large contact lens base and has recently introduced ortho-keratology (ortho-k).

The practice is currently exploring myopia control as an avenue to enter also.

Referring potential younger patients, Mr Slater explained: “We do talks at local schools and we actively encourage kids to come in and have fun – it’s not a test for kids, it’s all about having fun.”

Having been in optics since he left school, Mr Slater initially trained as a dispensing optician before later qualifying as an optometrist. He has experience in a range of optometry settings and locumed before acquiring his first practice.

Mr Slater likes independent optometry due to the flexibility that it offers. “We have the flexibility to do whatever we want and the right thing for our patients,” he said. “I think we need local, family-run indie optometry practices on the High Street, it wouldn’t be the same without us,” he added.

Speaking about entering business ownership, the optometrist said: “Of course there have been loads of steep learning curves, but it is really enjoyable and I would recommend independent optometry to anyone thinking of a career in optics.”