The informance of the performance

Poet, comedian and musician, John Hegley, speaks to OT  about his position on contact lenses, his style icons and breaking his spectacles 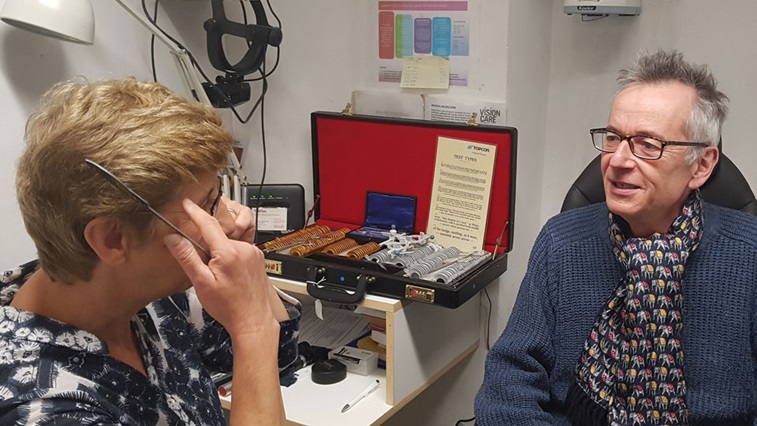 I got my first pair of spectacles when I was 12 years old and I really liked having them. I don’t know why it was. There was a boy at school who had glasses and I envied him. I’ve always liked spectacles and they make a significant difference to my vision. I came out of the opticians and thought, ‘Wow!’

Alice Looking Through the Glasses in my book Glad to Wear Glasses is a tale of a youngster who gets spectacles. It’s about delighting in glasses. The girl in the story can’t see the board in the classroom clearly and that was the same with myself. Mum said, ‘I think you should go for an eye test,’ and the rest was a lack of mystery.

I have two broken pairs where the arms have fallen off. There used to be an opticians in my vicinity that I would to send them off to get repaired for £10, but they’ve stopped doing that now, which is a real disappointment to me.

I have two working pairs. The ones I’m wearing now are a bit more of showbiz pair. Like children, I like both my glasses but one’s perhaps a bit more flamboyant than the other. The opticians in Dalston where I get tested is a little independent and is run by a nice bunch of people. The provenance of where they come from is important.

What shapes, colours or styles do you usually go for?

I always go for darker colours on the outside and around the edges. I did have one transparent pair but I didn’t think they were right for me. I did have a metal pair but I prefer a plastic frame. Arms coming off is a problem for me. The ones I’m wearing stretch out though. I’m clumsy, I sit on them sometimes. It’s a downer because you know what that crunch sound means.


Like children, I like both my glasses but one’s perhaps a bit more flamboyant than the other

John Lennon was so cool. He’s the person that springs to mind. Elvis Costello, of course. When punk came out, he was the only new-waver that I can remember who was wearing spectacles at the time. Morrisey was a pro-glasses man.

How important are your spectacles to your work?

Because I perform live, seeing the audience and the little expressions on their faces is very important. The audience’s reaction informs the performance – the informance of the performance.

I’ve never been a fan of contact lenses. I’ve written various things saying that I’m not keen on them. In fact, I have a poem called Glasses good, contact lenses bad, which expresses my position.

Because I perform live, seeing the audience and the little expressions on their faces is very important

How did your band the Popticians form?

The Popticians came about when we were busking in Covent Garden. I was busking my poems and songs, which were about glasses. They had escapology acts in Covent Garden and I used to attempt to escape from my spectacles by rolling on the floor, trying to pull my glasses off – I failed. Sue, Keith and Russell were playing swing songs in a little combo, so I thought it was time to swing the glasses and the Popticians were born. We’ve got Grandad’s glasses, which is a song about losing your glasses. We also have songs about cleaning your glasses, my glasses, my brother’s glasses and Contact lenses out.

How did you get involved with Vision Care for Homeless People (VCHP)?

Somebody came up to me at a show and asked if I’d be interested in looking at their work. I said, ‘Yes,’ and was invited down to one of the drop-in clinics in Aldgate. I was impressed with the set up and met Linda, one of the optometrists. I sat in her chair, saw folk coming in and found out about what the charity is doing. It felt like the people working there were really giving something back to society, which I found very encouraging.

What was the BBC Radio 4 appeal for VCHP that you took part in?

I did a tiny limerick about sitting in Linda’s chair and a song about the experiences in general, plus the charity’s aim to get a testing van from the money raised. And then the serious part about the details and reasons to donate.

Listen to Mr Hegley’s BBC Radio 4 appeal for donations on behalf of VCHP.

From the very beginning I loved my glasses
the eye test made me feel important
I wanted to be colour blind as well
for some reason I was never teased about them at as a child
not even at the grammar school
where daily they would mock my briefcase
because it was not made of leather.

“I picked this out because of the stigma about wearing glasses. It relates to intolerance and feeling strong in yourself. This poem is about people shouting out about your glasses and so it’s about getting in before they do”
Poet, comedian and musician, John Hegley