Founder of VisionBridge, Julian Jackson, shares his story as he embarks on a journey that could, one day, result in him gaining his vision back 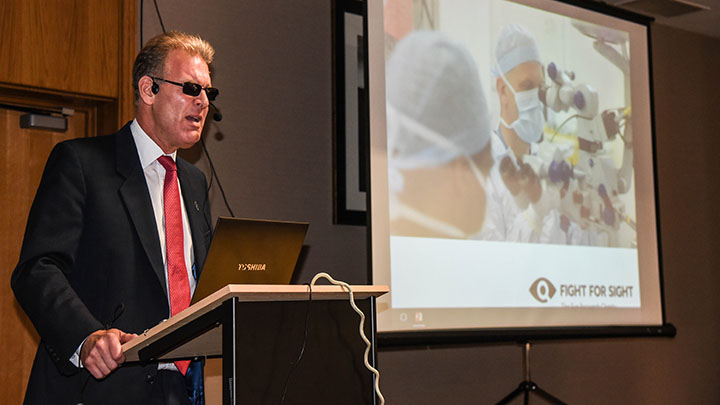 Just over 50 years ago, I was diagnosed with an inherited, degenerative retinal disease called retinitis pigmentosa (RP).

I distinctly remember the consultant ophthalmologist at Moorfields Eye Hospital in London shaking his head, confirming that there was “no hope,” and casually advising my mother to take me and my twin brother to faith healers as a possible therapy – my goodness, how eye research and patient support has progressed since 1965.

The ongoing application and research behind gene therapy and stem cell research, laser and cataract surgery, corneal transplantation, optical coherence tomography imaging, retinal implants and robotics that abound in eye clinics and hospital laboratories today were a very distant dream back in those days.

Back in the chair

As someone who lived with diminishing sight as a result of a toxic cocktail of RP, inoperable cataracts and macular oedema followed by blindness in 2010, I have followed the twists and turns, and breakthroughs and setbacks of eye research with a particularly personal interest. Therefore, it was with great trepidation that after six years without an eye examination and flying in the face of previous so-called experts’ advice that on no account should I have my cataracts removed, I approached an independent optician for a complete eye health check-up.

This eye examination, which was performed over a year ago, set me on an NHS referral pathway. It took me, via my local GP, to the doors of Southampton Hospital’s eye clinic and into the impressively capable hands of Professor Andrew Lotery, an internationally acclaimed clinician scientist and the expert wielding the technology to extract my cataracts.

After much discussion with him, it was agreed that my left cataract would be targeted first – so I have one cataract removed and one to go. However, I would suggest that this is not a procedure for the faint hearted. I had to work hard to suppress a rising panic and a feeling of total helplessness as I continued to reassure myself that I had nothing to lose, and everything to gain, with a promising future trajectory towards possible retinal implants in due course.

I felt very nauseous for 48 hours after the operation and my level of fatigue surprised me as I am a relatively fit 54-year-old.

Since the end of my extended steroid drop regime, my left eye continues to occasionally weep, pinch and ache, so I am returning to my optometrist for a further check up. I have to remind myself that cataract surgery is hugely invasive to the eye and despite the fact that the cornea is the fastest healing tissue in the human body, it will take time for this “wound” to heal.

I am very conscious of stories about lengthening waiting times for cataract patients, cuts in NHS budgets and the fact that some hospital trusts are limiting the number of second cataract operations to save money. So with a mixture of hope and anxiety, I am now waiting to be called for my second cataract to be removed. I am hopeful that once this is completed, the extra light filtering into both my eyes will allow me to navigate more efficiently around my house and, in jargon terms, be “more location aware.”

"I had to work hard to suppress a rising panic and a feeling of total helplessness as I continued to reassure myself that I had nothing to lose, and everything to gain"

After my new lenses have settled down, the prospect of retinal implants, possibly performed by a team at Oxford Eye Hospital, is thrilling. But I know that I have to manage my expectations.

The way most implants work is by capturing light through a camera that in turn stimulates the optic nerve and delivers visual signal data to the brain. However, the implant that interests me is the Alpha IMS because, as I understand it, unlike other similar devices, it does not rely on an external camera. Instead, light is detected inside the eye, enabling the patient to look around by moving the eyes rather than the head.

It also has a much higher resolution grid and is implanted under the retina, allowing the middle layer of the retina to process the input before it is sent to the visual cortex.

I last saw my daughter smile in 2010 after I had positioned her under a spotlight in the knowledge that I was going blind very soon, and the prospect of being able to see her face again keeps me awake at night. So, time will tell if, and when, I will ever be able to catch another good night’s sleep.