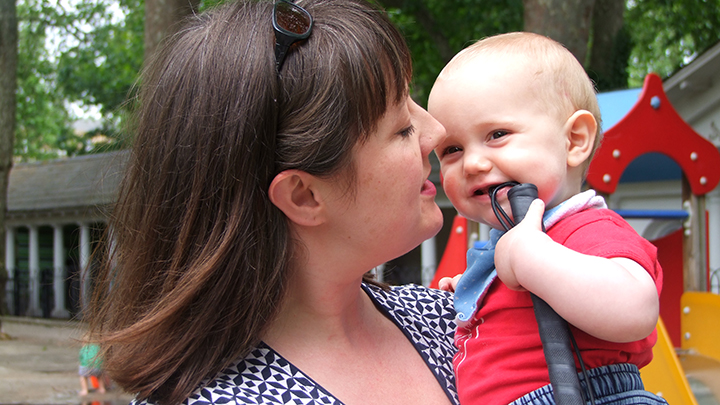 During my teenage years, around the age of 14, I was diagnosed with retinitis pigmentosa (RP). At first I only experienced night time vision loss, a common symptom of the inherited condition. Over the years since then, my vision has changed a lot.

By the time I reached the age of 20, my peripheral vision began to deteriorate. While this loss has been gradual, over the last two years it has got particularly restricted and I have taken the decision to use a white cane.

Out of the blue

Being diagnosed with RP was a shock for me. I went for a routine eye test, as I wanted to get contact lenses so I could be a “trendy” teenager, and it was during this appointment that the optometrist noticed some spots on my retina and referred me to Moorfields Eye Hospital.

An ophthalmologist gave me a second opinion and confirmed what the optometrist had suspected – I had RP.

It’s hard for me to remember completely what happened during that appointment as I was only 14 and was shepherded around by my parents. However, I do remember being sent to see retinal specialist, Professor Alan Bird, a world leader in his field, and having a battery of tests done. They took photographs of my retina and took multiple field tests, and after this long drawn-out series of tests, I was told what I had and that there was no treatment.

"Many people assume that if you are partially sighted or blind, you are also deaf, which is not usually the case. We are just people whose eyes don't function as well as others"

Bearing in mind that this was some years ago now and I was just 14, on diagnosis, I was told that I would have usable vision until I was 50. I later learned that after I had left the room, the ophthalmologist told my parents that I would only have usable sight until the age of 30.

To be honest, to my teenage self both of those ages sounded more like I’d be 190 by the time I had to worry about my sight.

At that point in the early 90s, it was basically “go home and go blind” – there was never going to be a cure. However, it is very different today, and while it is still a massive postcode lottery, there are parts of the UK where you can get really fantastic support from ECLOs, are referred to really helpful, specialist charities – in my case this was RP Fighting Blindness – and it works seamlessly.

For the first few years, I didn’t want to do anything about my diagnosis. However, at the age of 20, I went to live in New York for work and decided that I would like to meet people who were in a similar situation to me.

I approached the US equivalent of RP Fighting Blindness and met some amazing people who had RP and who worked for the likes of MTV and Goldman Sachs and realised that I was not restricted or different due to my condition, I could still achieve and do what I wanted to.

On returning to London I wanted to set up a similar support group and contacted RP Fighting Blindness who were really receptive of the idea. The group has since morphed into the London branch for RP Fighting Blindness. It’s a very informal social group that is often the first port of call for people who have been diagnosed. We meet up about four times a year.

Today my vision loss affects my life more than it has ever done. I wear blue-blocker sunglasses to help with the glare and I have cataracts, so many everyday tasks take me longer.

While I still have fairly good central vision and can read print and use a phone quite easily, for example, activities linked to my peripheral vision are difficult. I find moving around independently that much harder than others.

I sometimes trip over objects as I can’t see them and I can find it very hard to locate things, especially my toddler. I can be standing in the park calling his name and he will be standing right beside me asking “What mummy?”

What has really shocked me when speaking to my visually impaired peers is the number of them my age who could really benefit from using a cane, but have currently decided not to as they feel like they would be branded a fraud.

Since making the decision to use a cane, I have encountered many misconceptions. Many people assume that if you are partially sighted or blind, you are also deaf, which is not usually the case. There are specific conditions, such as Ushers, where you can experience sight and hearing loss, but these are much rarer and people tend to use a red and white striped cane to signal this dual impairment. We are just people whose eyes don't function as well as others.

While I knew that it was going to be hard to use the cane at first, it has given me so much. Consequently, when the idea of the RNIB’s #HowISee film came about, I felt like it was a great opportunity to educate people about vision loss and debunk some of the common misconceptions.

For me, the campaign allows blind and partially sighted people to say: “Look, I may be using a cane or I have a guide dog, but I can see a little and I can make eye contact with you. I may be able to do a number of things that you don't expect, but I am not a fraud.”

I hope that the film reaches out to those who don’t understand about being blind or partially sighted to give them a better understanding, so that next time they see a visually impaired person struggling, they don’t assume and categorise them into one box.