Director of engagement at the Royal National Institute of Blind People, Fazilet Hadi, shares her experience of living with retinitis pigmentosa

I was born with a genetic condition called retinitis pigmentosa (RP).

It was my mother who first spotted that I had a problem. She noticed that, as a toddler, I was always reaching for toys but not quite grabbing them. She took me for a sight test and, following a referral to Moorfields Eye Hospital, I was diagnosed with RP.

Whilst I was diagnosed around the age of three, the condition didn’t affect me until later. As a child, I was an avid reader and one of my earliest memories of knowing that something was wrong was when I was nine and at school and noticed that it was taking me a lot longer to read the words on an English test than it took others. I remember wanting to hide the fact that I was struggling. I suppose I didn’t want to be different.

Through my early teenage years, up until my O-Levels, I was writing with thick felt tips and borrowing large-print books from the library – I still had some useful vision and was trying to use it.

RP for me was a creeping condition – I was constantly adjusting to deteriorating sight. I suppose this was good in a way as I didn’t have a sudden dramatic loss of sight to deal with. I gradually lost the ability to read print, and my night vision went, which meant I struggled to get around. Later I lost the ability to see colour, which continues to be a real sadness. As I lost sight gradually, I can’t pinpoint when major deteriorations happened.

RP affects people in different ways – some people’s vision isn’t affected until their early 20s or 30s. For me, the condition was quite aggressive and my vision deteriorated, sometimes slowly, but mainly in bursts throughout my school and university years.

I hated going to parties and discos where I felt like a fish out of water, finding it very hard to participate.

The first sight loss-related service I accessed was at 15 when I signed up for Royal National Institute of Blind People’s (RNIB) Talking Books service. At that age, while I could read large print for a little while, the strain of reading a whole book was too much.

It was in my 20s that I began to use a white cane. Looking back now, it was ridiculous that I didn’t use one earlier. I persisted in trying to get around without a cane well beyond the time I should have used one. It was probably quite dangerous, as I didn’t always see the things around me. Now it’s more of a friend, keeping me safe and stopping the need for explanations, as it signals to people that I can’t see and might need help.

“I think sight is an amazing thing and if someone could wave a magic wand, I would definitely have it back. I’m very pragmatic though, I don’t think someone will wave that magic wand in my lifetime”

From a young age, I was focused on being able to get a job. My logic was that work would give me an income and with money, I could pay for the things I found difficult.

After graduating with a degree in sociology from York University I met with someone from the RNIB to discuss my future career. I remember asking them what jobs I could do and being given a handful of options, which included being a physiotherapist, a lawyer, or a social worker. After being reassured that other blind people had done it, I opted to become a lawyer.

After qualifying, I worked for around eight years in Law Centres giving free legal advice – I loved that I could make a difference to people’s lives. That has probably been the one consistent thing during my career – I’ve always enjoyed being able to make a difference.

After several years of working as a solicitor, I decided that I wanted to influence change on a wider scale. Supporting individuals was great, but the problems they faced were often societal. I applied for jobs in local government, and initially became a Race Equality Adviser for Southampton Council, before becoming an equalities manager at Lewisham Council. Both roles gave me considerable experience of influencing change for the benefit of communities. After seven years in local government, I joined the RNIB where I have stayed for 19 years.

I have a brilliant job at RNIB. I’m director of engagement and have responsibility for our new community of blind and partially sighted people, RNIB Connect. I oversee our research, marketing, communications and political campaigning. I’m also the lead officer for the UK Vision Strategy.

"RP is a really creeping condition –
you are adjusting all of the time, which is good in a way as you don't have this huge thing to deal with"

I’m a very positive person and have a full and interesting life. Sight is an amazing thing and if someone could wave a magic wand, I’d definitely have it back, but I’m not holding my breath.

As I’ve got more confident, I’ve become more assertive about my needs and less worried about asking people for help. Whether at the railway station, in the gym or on the street, I’ve learnt that a lot of people are willing to help. With confidence, any disability or impairment becomes easier to deal with. Embracing this confidence, in October 2016 I went on a 37km fundraising trek across Iceland with RNIB colleagues and supporters. I knew that, with Iceland’s landscape, it wasn’t going to be like taking a walk in the local park. But like all things that challenge us, it stretched me and gave me more confidence – it was a fabulous experience.

I’m not up for doing the daredevil things that some blind people do, but if I look back at my younger self, there are certainly things that I’d do now that I would never have done back then.

RNIB is hosting a second fundraising trek across Iceland from 21–25 September 2017. For more information and to sign up, visit the website. 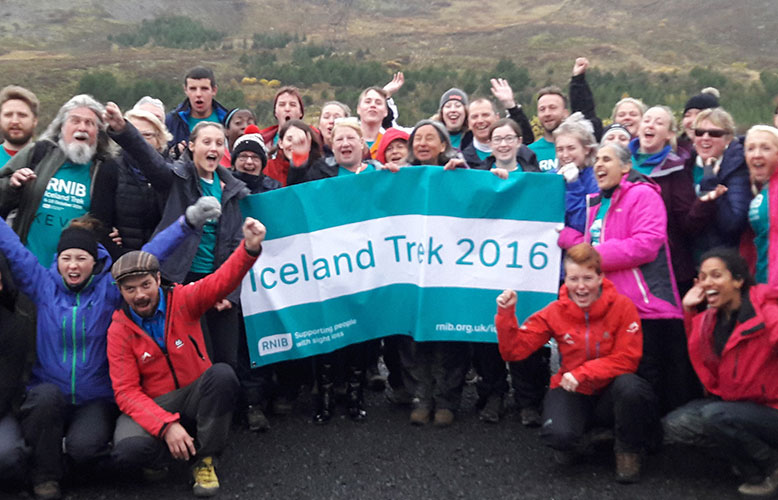