The right team and the right culture 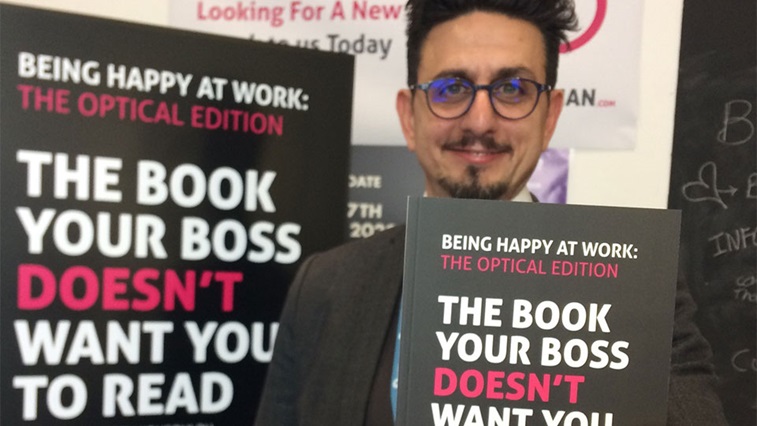 Speaking to OT about why he decided to launch NeedAnOptom.com, Mr Kousoulou said: “The way optical recruitment is working at the moment is that the agencies are just putting postings on job boards. I thought, ‘Maybe we could do things differently and look at happiness.’”

He revealed that creative differences with a business partner on how to run an optical practice left him feeling unhappy at work.

“I would say left and they would say right,” he shared.

“My whole career I’d been happy, but for the first time I became unhappy, so I wanted to share with people that there are options,” he explained.

Mr Kousoulou distributed his book, Being Happy at Work: The Optical Edition, at 100% Optical in January, and since then has worked with job seeking optometrists and dispensing opticians, finding positions for them at multiples and independents.

He told OT that finding work for people is the easy bit but finding the right individual to fit the right place is challenging.

“You have to think about somebody’s motivation to leave a job. You either have to be super unhappy or do not feel appreciated,” he said, adding: “I’m educating people about the choices that are out there – you can make a choice and you don’t have to be afraid. That’s my motivation – to find people the right team and the right culture because everyone has a different idea of what’s perfect.”

The business is centralised around social media, which he explained is different to the current business model of job search websites.

Mr Kousoulou explained: “I’ve got a feeling that the current optical recruitment sector has got to change. I’ve been listening, obsessing almost, to recruiters around the world doing podcasts and they estimate that 50% of the recruiters will no longer be in employment. In the future, it’s going to be based around social media with young people being in-boxed through their Instagram or instant messenger.”

He continued: “There are young optometrists on Instagram communicating with each other. Facebook is for an older demographic. Who knows what the next new social media platform will be. The millennials and generation X are our future and these guys would prefer a text or an instant message to a phone call. I don’t think there is anybody that offers to create a relationship with them at the moment, so that’s the basis of my business.”

The self-titled director of happiness said he wants to find out what makes people happy and find a job that fits with that criteria.

“It might sound airy-fairy, but people are resonating to that idea. They think, ‘Maybe I’ll be paid £1000 more over here, but I’d rather get a £1000 less and be happy.’ The culture of a business leads from the top,” he said.

The first thing that Mr Kousoulou asks person who is searching for a job is ‘Why are you leaving?’ and ‘What is it that’s missing?’ He takes them through a ‘happiness barometer,’ establishes where their comfort zone is and asks them if they are ready to make the “healthy” decision to get out of it.

When speaking about what’s next, Mr Kousoulou shares that he’d like to create a community of optometrists and dispensing opticians. He said that the business is “holistic” and stays in touch with people once they have found a job.

“The future of recruitment is based around social media and happiness. A job is no longer for life, people move around a lot more and have more options,” he concluded.