For the second year running, three pre-regs at Specsavers Hounslow passed their final assessment on their first attempt 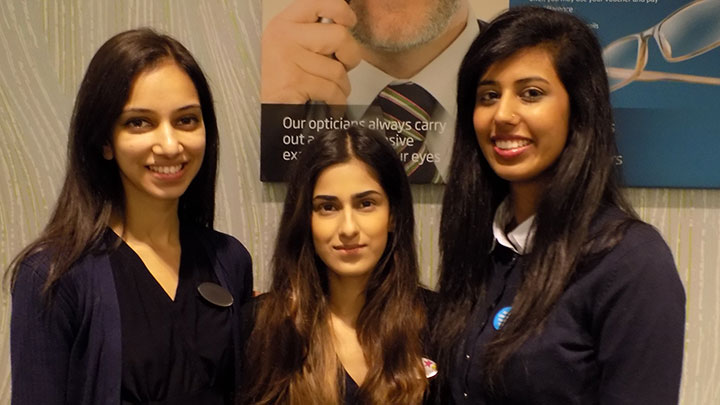 It is the second year running that all of the practice’s pre-regs have passed the examination on the first try.

Gurkiret Gohlar, Keyuri Shah and Harneet Sidhu all graduated from City, University of London with a BSc in Optometry in 2016 and completed their pre-reg year under the supervision of optometrists Sandeep Gujral and Rekha Rudra.

The three newly-qualified optometrists have all been kept on by the Hounslow practice.

Ms Gohlar explained that working with other pre-reg optometrists was helpful during the year, especially as there was existing friendships from university.

“We all have different strengths and weaknesses and would discuss different scenarios and gain as much knowledge as possible,” she said.

“It also helped that all three pre-regs from last year still work in store. I’d talked a lot to them before my placement so I had a good idea of how the year would go,” Ms Gohlar added.

Optometrist director, Ranna Rai, believes that the practice’s work experience programme is the key to its first time pass rate, which he estimates to be more than 90% over the past 17 years.

Mr Rai explained that the practice takes on pupils from local schools for a week’s work experience, and that some later get in contact looking for a job as an optical assistant when they’re studying optometry at university.

“In their third year of university those optical assistants sit in with the pre-regs and act as patients for them. When the supervisors are explaining, the undergraduates are there listening, so by the time they’re pre-regs themselves they already know what’s going on,” he said.

Around 400 pre-reg optometrists joined the Specsavers graduate training programme in 2016 and 2017. The multiple expects this to increase in 2018.