A secret weapon against chip thieves

Your gaze can give clues about personality, encourage honesty and, according to the latest research, act as a deterrent against a summer time snack theft 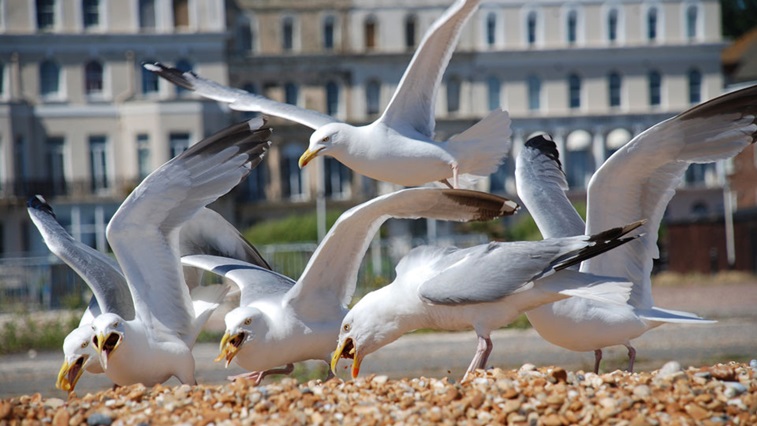 It’s a summer crime scene we know too well. A scattering of crisp golden chips on the tarmac, the feathered culprit only a dot on the horizon making its squawking getaway.

This week scientists addressed this common source of holiday disappointment in research that suggests making eye contact with seagulls could dissuade them from chancing a free meal.

The study published in Biology Letters saw an Exeter University researcher swap her lab for a series of coastal Cornwall towns where she lured herring gulls with a 250g of potato chips.

When the gulls approached the chips on foot or swooped from above the researcher would start a stopwatch and either look towards the avian interloper or in the other direction.

The study found that the gulls took less time to approach the food when the researcher was looking in the other direction.

“This demonstrates that gulls use behavioural cues from humans when making foraging decisions in urban environments, and that they find human gaze aversive,” the researchers highlight.

Gaze patterns are not only useful as an al-fresco dining security system. Below are three other examples of the power of human gaze.

Experiments using an interactive computer game by Finnish scientists found that study participants were less likely to lie after meeting someone else’s gaze.

They highlighted: “The findings have implications for both everyday and professional situations, such as clinical conversations and police interrogations.”

Research by Australian and German scientists found that eye movement patterns were associated with whether the study participants were neurotic, extroverted, agreeable or conscientious.

The researchers suggest that the study could improve interactions between humans and machines by improving the ability of robots to interpret social signals.

Speak with your eyes

A wearable eye tracking device enables people with locked-in syndrome to communicate with their eyes.

The EyeControl device operates using artificial intelligence to provide a 24/7 communication tool that can be used for emergency and social purposes.