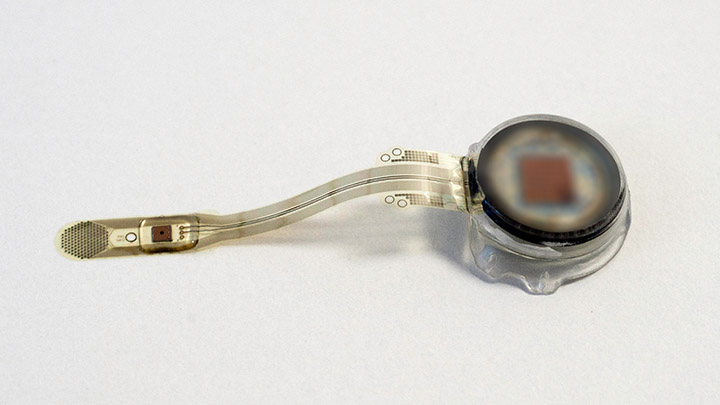 A Moorfields Eye Hospital surgeon believes that we now have the technology to replace the eye’s degenerated photoreceptors with a new, modifiable bionic eye.

He told OT that, in his career during fellowship training, he had seen alternative bionic eye systems studied and tested – first the Argus II device in the University of Manchester trials and then the Alpha IMS and AMS sub-retinal implants in the ongoing University of Oxford research.

But he described the Iris II – which comprises an epi-retinal implant and a “bio-inspired” camera – as a “second generation” system.

Dr Muqit said the camera, which sent signals wirelessly to the implant, adjusted itself to collect the most useful visual information, for example capturing motion while outdoors and providing more specific details of objects while indoors.

“It’s trying to give more realistic vision,” he explained.

The ocular implant, developed by Pixium Vision, also has more electrodes than the other epi-retinal systems – a total of 150 – to give a higher-resolution view of the world to patients, Dr Muqit emphasised. The implant could also be taken out without surgically removing the tack that held it in place, allowing it to be exchanged or extracted far more safely.

The trial, starting in the UK in July or August, will offer the implant to patients who have lost their sight through choroideremia, retinitis pigmentosa and related conditions including Usher syndrome.

Dr Muqit emphasised that key to the success of the process was the rehabilitation of the patient, led by a specialised team including optometrists.

The team helps the patient to retrain their vision to recognise different stimulations as the objects they corresponded to. “It’s a very intensive process,” he explained.

The public funding of bionic eyes could see a spike in demand for optometrists interested in such work, Dr Muqit highlighted.

“It’s a very exciting field for optometrists to think about getting involved in,” he said.

Dr Muqit highlighted that he believed the Iris II would offer patients the “significant benefits” required to convince the NHS specialist commissioning group to publicly fund it.

“[With other implants,] patients can see the outlines of shapes and the outlines of objects. We hope this will be able to offer to patients the benefit of higher resolution. [The NHS] will be looking to see if we can advance that level of vision for patients,” he said.

The Iris II also requires the shortest surgical time for its implantation compared to the other systems – something that would also appeal to the NHS specialist commissioning group, Dr Muqit explained.

“I am very excited to see what the outcomes of the study will be. This is the next step in the evolution of these implants … We’re heading in the right direction,” he added.

To learn more about the Iris II, visit the Pixium Vision website.