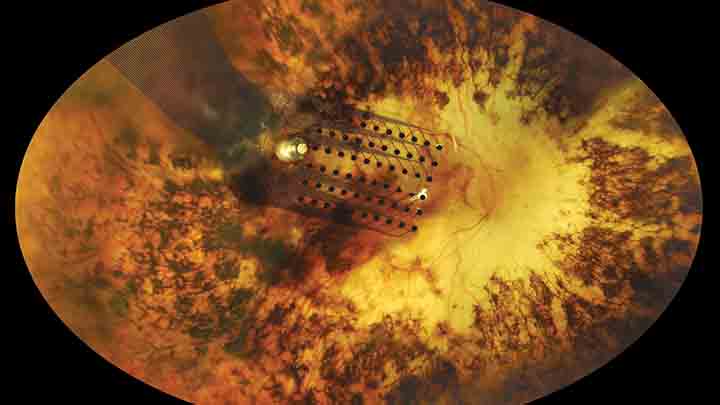 The NHS specialised ophthalmology services clinical reference group is currently evaluating the device, manufactured by Second Sight. Dr Stanga has seen the system, which collects visual information from a camera and sends it to an implant on the retina that stimulates the optic nerve, work in both retinitis pigmentosa and age-related macular degeneration (AMD) patients.

Dr Stanga told the conference: “I would like to do the first NHS implantation in 2016.”

As the Argus II bionic eye does have its CE mark, patients can get it privately – but at an £150,000 cost. Dr Stanga emphasised: “I’m more interested in getting it through the NHS [as] everyone will benefit much more.”

Dr Stanga’s initial work with the bionic eye was in retinitis pigmentosa patients who had severe retinal degradation. “They can only say whether a light is on or off,” he explained.

The trial’s successes were both exciting and encouraging, he said. Patients had seen improvements that ranged from being able to see large objects or motion to being able to read large print the size of a cigarette packet. Others were able to perceive different colour combinations with different parameters of stimuli, Dr Stanga explained.

He noted: “It does take some time and they don’t have the same sort of vision that we do. [However,] our patients have been implanted for over seven years now and the results are still good.”

Dr Stanga’s next step – using the device in AMD patients – was a bit more of a leap in the dark. He told attendees that he was initially unsure if the addition of the implant over the site of atrophy would work in conjunction with the patient’s remaining peripheral vision.

His trial of five dry AMD patients, in the macula of their more degenerated eye, is ongoing. Four people have had the surgery.

“The system is well tolerated and we can restore some visual function in patients with advanced AMD … For us and the patients, this is a significant achievement,” he emphasised.

Dr Stanga said his patients were effusive about how the device had made them more independent and able to interact with family and friends.

“[The device] improves orientation and mobility and improves everyday life,” he highlighted.

NHS media relations advisor, Mike Forster, told OT that there was no fixed date for a decision on NHS approval of the Argus II device. He noted: “Plans will be set out in due course.”