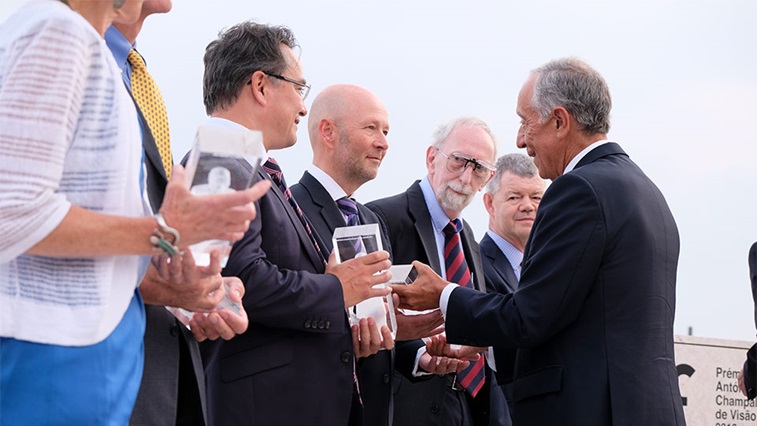 Clinician scientist, Professor James Bainbridge was recognised for his contribution to gene therapy research through this year’s António Champalimaud Vision Award. The €1m prize (£902,000) was distributed to three teams that conducted research leading to the development of a genetic treatment for Leber Congenital Amaurosis. OT spoke with Professor Bainbridge about the award and the future direction of his research.

Can you tell me about the research the António Champalimaud Vision Award recognised?

The research recognises the development of gene therapy for blinding eye disease. This is a relatively new technique that has been developed over the last few decades. It involves an intervention designed to target gene defects. Many people have poor sight because they lack one of the many critical genes that are required for our vision to work properly. One way to improve their sight is to provide the eyes with the genes that they are lacking.

Our treatment focused on a severe retinal disease that affects children and adults called Leber Congenital Amaurosis. For this particular condition, there are two central benefits. One is to improve night vision and the second is to protect the daylight vision in the long-term. We are currently working to optimise the treatment by testing a new version of the therapy with the aim of finding out whether it can protect sight for longer.

It is hugely rewarding to see that this new technology can improve people’s sight. At the moment, it is directed towards people with relatively rare forms of inherited eye disease, but it is hoped that the same technique or a similar technique may be effective for people with other forms of genetic eye disease.

What is the expected timeframe for translating this research into a treatment that will benefit a large number of patients?

We can be confident that gene therapy will be valuable for people with rare forms of genetic eye disease. The hope is that the technology could also be used for commoner forms of eye disease, including conditions like macular degeneration and diabetic eye disease. I think it is important to stress that we are looking at a long timeframe. Its application so far is directed toward people with specific forms of rare genetic disease, but proof-of-principle in that context suggests that a similar kind of technology could be of value for other forms of eye disease. It may take many years before one can expect this to be available as a treatment for common conditions.

Can you tell me about your work to develop a treatment using stem cells?

We are interested in the possibility of reconstructing or repairing the retina using the transplantation of cells from a variety of sources. Stem cells are one very exciting source of cells for retinal repair. For some time we have been working to transplant photoreceptor cells into the retina in the laboratory. We are very excited by the results in terms of improvement in function. We are now working towards translating these findings in the laboratory into something that could be useful to people with blinding eye disease. Specifically, those people with relatively advanced degeneration because in that situation there are too few cells surviving to target with gene therapy.

There are many challenges. It is going to take a number of years before we can expect to see significant benefits for people with eye disease. In fact, stem cells are already used for certain applications in the eye – for corneal repair, in particular. To use stem cells to repair the retina is more challenging. It is harder to transplant nerve cells than it is to transplant surface cells.

What are the key messages you would like optometrists to understand about your stem cell research?

It is important for optometrists to be aware that the field of regenerative medicine is progressing towards a point where we hope in the future that stem cells will be able to provide benefit for people with conditions that are currently considered untreatable – like macular degeneration, for example. At the moment, these treatments are not fully developed and are not available, but there is hope that they will become available in the future.

What are the advantages of working as both an ophthalmologist and a researcher?

As a surgeon, it is very rewarding to be able to make a difference to individuals with sight impairment. Working in science, it is exciting to have an opportunity to contribute to the development of new treatments that could offer benefits to a large number of people.