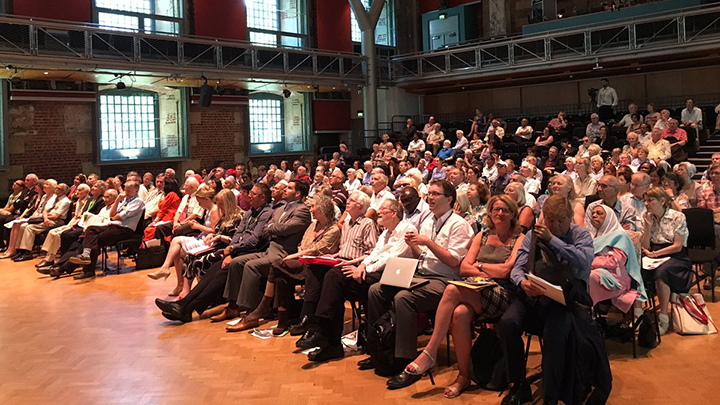 Professor Pete Coffey, director of The London Project to Cure Blindness, emphasised that his team had developed an affordable and effective stem cell replacement for retinal damage from dry AMD.

“This is a major achievement for me, and great in terms of those patients,” he emphasised to OT.

In the project’s first stage, researchers used human embryonic stem cells to regrow retinal pigment epithelium cells on an artificial membrane, creating a specialised patch. This patch was then surgically inserted, in a 45-minute Moorfields operation, into the middle of the retina in the trial patients.


The official research results for the first two patients to receive the patch will be released shortly, but in the meantime, the research would enter the second phase, OT heard.

Instead of receiving an artificial membrane with just retinal pigment epithelial cells on, the next cohort of patients would receive a patch with all three layers of the retina, Professor Coffey said.

And this would be developed from the patient’s own cells, he explained, adding: “Using four genetic switches on a piece of skin, we can get the beginning cell that made you.”

The use of the patient’s cells meant that their DNA could also be studied at the same time, potentially allowing for a personalised diagnosis of their condition, as well as an individualised treatment, Professor Coffey told the AGM audience.

Following the second stage, which is being funded through a £3m donation from the Michael Uren Foundation, regulatory approval for general patient use will be sought.

“As long as we can show that there’s good safety and good visual outcomes, then we go back to government and ask if we can go through a new advanced therapeutic route, which will allow that therapy to go quickly into the NHS,” Professor Coffey explained.

“These therapeutics, if they work, could save the NHS millions of pounds because they’re restorative … [The patches] can potentially restore [a patient’s sight] in a way so that they can become independent again,” he concluded.

While still a prototype, the device would one day offer whole-eye OCT, autorefraction, pupillary light response and other eye examination tests in a handheld system.

“We hope to have the device and available for CE marking and subsequent commercial availability around 2018,” Dr Keane outlined.

“In the medium term, we’re looking to have this in the hospital eye service, in retinal therapy clinics and injection clinics where people often have to wait for hours for a relatively routine decision. So if we could automate a lot of that process, we can increase the efficiency, reduce the costs and really improve the quality of life of patients attending these clinics,” he highlighted.

“I think it’s much further down the road that something like this would become available in the community, in the High Street opticians, or local eye hospitals. But that’s something we’re certainly aiming towards – maybe, in the long term, even in patients’ homes,” he explained.

The OCT project is also collaborating with Google DeepMind to see if artificial intelligence can assist in diagnosing eye disease.

Mr Probert commented that: “It does worry me slightly that emergency levels continue to grow 6% year on year. There are a lot of challenges for us.”

However, the hospital met its targeted budget of £2m in surplus for 2015–16, he highlighted.