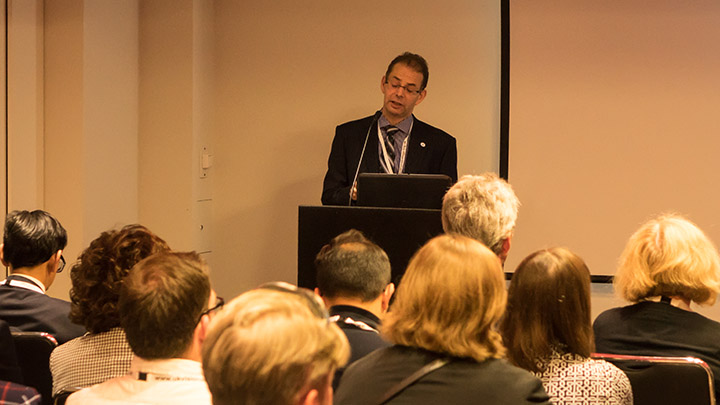 He told delegates to the conference’s science and technology stream that in recent years, scientists have come to understand the genetic risk factors that made a person more likely to develop AMD.

One of these risk factors was a mutation in the ‘complement pathway,’ which was a body defence system against infection, he explained.

“If it’s overactive, it can cause damage to the cells in our body,” he highlighted.

There is a drug – lampalizumab – that can dampen down this overactivity, Professor Lotery said. When administered to patients with AMD and this kind of mutation, the progression of their disease symptoms slowed significantly.

The drug is now set for a Phase III trial, funded by Roche, he said.

When asked about the possibility of offering lampalizumab or a similar treatment to patients with the mutation before they developed AMD, Professor Lotery emphasised: “I think that is ultimately what we want to get to. Now, we’re a bit like the fire brigade, turning up when the house is burning down. We want to be a fire alarm.

“But it’s one stage at a time. We’ve got to prove this has an effect,” he concluded.

Worldwide, scientists have been able to grow a mini-retina to replace degenerated photoreceptor cells, as well as retinal pigment epithelium cells as an AMD treatment.

She emphasised: “The initial results are very encouraging. There is a huge potential for stem cell treatments in the eye.”

The Wayfindr navigation system and the OrCam vision assistance system were also presented during the conference session.

To find out more about this and previous years’ conferences, visit the Vision UK website.