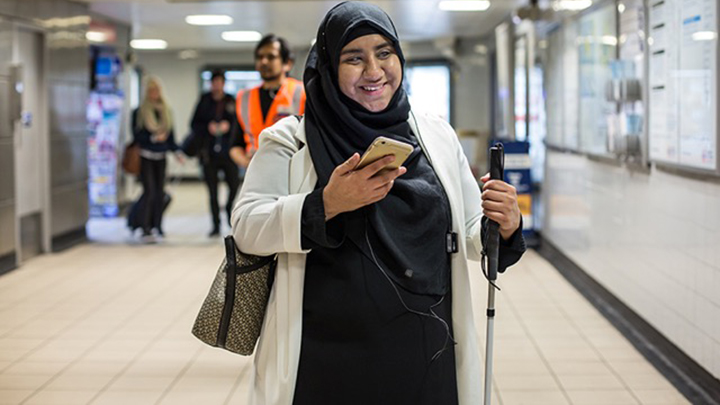 Wayfindr hopes to be helping blind and visually impaired people to navigate the London Underground with 12–18 months, after launching its technology as an ‘open standard’ on Friday (13 May). This will allow developers around the world to utilise its audio navigation technology that is designed to help blind and partially sighted people navigate cities.

The technology, which has already been trialled successfully at one Tube station, offers users a “consistent and reliable” navigation service that can be accessed via their smartphone. It communicates using Bluetooth signals and can, for example, advise a user on entering a train station how to get to a particular platform.

The open standard comprises a set of guidelines that developers can use to build accessibility tools that work together consistently, as well as a demo app that they can adapt for their own purposes.

Wayfindr was established in 2014 as a joint project between the Royal London Society for Blind People (RLSB) and digital developer Ustwo. Launching the audio wayfinding technology last year, the organisations have been developing and testing the open standard following a $1m donation from Google.

The decision to release the open standard came after Wayfindr concluded that it could not build the apps or tools required to be able to release this technology on a large scale.

Launching the open standard is a step forward to making the technology available to the masses, chief executive of the RLSB, Dr Tom Pey, explained to OT. “Everyone working on this project wanted to release the standard, as our objective is to make London the most accessible city in the world for blind people. We can’t achieve that objective by owning the technology and charging people to use it, so we wanted it to be free.”

The technology was successfully trialled at Euston station last year and Mr Pey confirmed that additional testing will be performed across a further five London stations shortly. Discussing the testing, Mr Pey told OT: “This testing will be much more complex – testing the system almost to breaking point. The intention is then for it to be rolled out across the entire London underground system, and eventually the whole of the rail system, not just in London, but across the UK.”

He added: “We would be really disappointed if we were not in the position to roll it out across London in the next 12–18 months.”

Learn more about Wayfindr in the below video or read about its potential.