With cataract surgery waiting times in Northern Ireland measured in years, OT  investigates the impact of delays on patients and the optometrists who care for them

For more than three years, John Clifford has waited for cataract surgery. The changes to his vision have been subtle – a sense of unease when driving at night, the purchase of a magnifier with a light attached after he began struggling with small print, the world still in soft-focus even after a new prescription.

Now the 79-year-old retiree has been told by his optometrist that further deterioration in his vision could mean he is no longer fit to drive.

Living among a patchwork quilt of fields in Greenisland, County Antrim, Clifford is a mile and a half from the closest railway station.

His wife does not drive and Clifford recently had an operation removing a toe from his left foot.

“Walking that distance would be difficult to say the least. If I cease to be able to drive then I think we would become virtually housebound,” he told OT.

While the delay in receiving treatment has created anxiety for Clifford, his main source of frustration has been the lack of communication from the hospital trust following his referral from primary care.

“You get the feeling that you don’t really matter. Their priorities are elsewhere,” he shared. 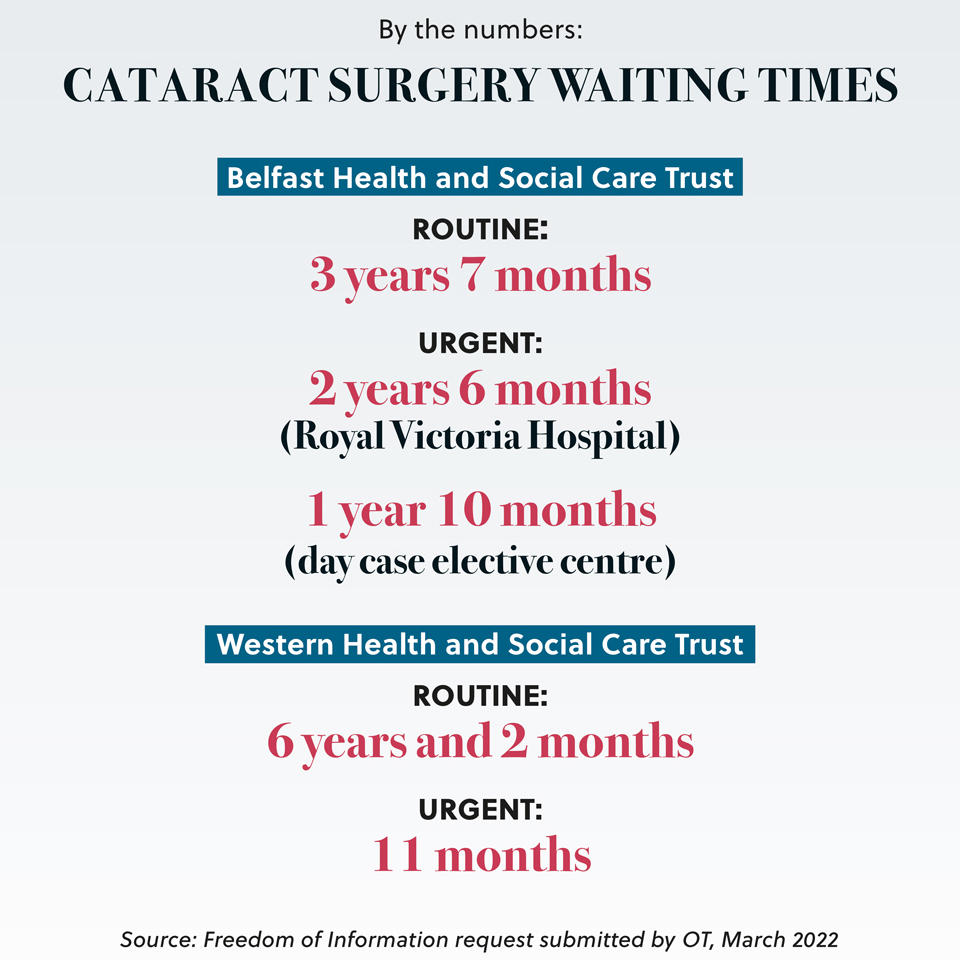 Long waiting times across all forms of elective surgery have been a persistent issue within Northern Ireland.

In January, Northern Ireland’s Commissioner for Older People was given permission to intervene in a High Court action over the length of hospital waiting lists.

The case was brought by Belfast woman, May Kitchen, 77, who has been waiting for cataract surgery for over six years.

Explaining his decision to support the legal action, Commissioner Eddie Lynch shared that he has received an increasing number of complaints from older people in relation to lengthy hospital waiting lists.

“These are people who, very often, have worked and contributed to society their whole lives and whose quality of life in latter years becomes intolerable due to the impact of the wait for medical care,” he emphasised.

Clifford highlighted delays for all forms of specialist care within the NHS are commonplace.

“When you ask how long you’ll have to wait, it’s years,” he said.

Following Freedom of Information Act requests by OT, the Belfast Health and Social Care Trust revealed that the average waiting time for routine cataract surgery within the trust is three years and seven months.

This extends to an average waiting time of six years and two months for routine cataract surgery at the Western Health and Social Care Trust.

Clifford shared with OT that he is not in a position to pay for private treatment.

“We have a fixed income. It would be a serious blow to our limited finances should we have to pay for this surgery,” he said.

The view from practice

Fergus Bain is an optometrist and director of Alexander, Bain & Murray Opticians, which has practices in Dungannon, Portadown, Lurgan and Armagh.

He recalled seeing an elderly woman in practice with lenses that had become “almost opaque” due to cataracts.

You get the feeling that you don’t really matter. Their priorities are elsewhere

The woman lived in a rural setting by herself and could no longer drive.

Following a discussion with the woman and her niece, it was decided that a private referral was the better option.

“Unfortunately this patient, who was a young lady when the National Health Service was created, and who had worked and contributed throughout her life to its upkeep, now had to apply for a credit union loan to pay for private ophthalmology care,” he said.

Bain told OT that it is increasingly difficult to give patients estimates of waiting times for NHS procedures.

“It’s frustrating as a practitioner to see the dichotomy in waiting times for private and public consultations,” he said.

“If they have to wait for NHS referral, we see concerned and anxious patients on an annual basis for many years before they eventually get their cataract surgery,” he shared.

Clifford emphasised to OT that he thinks the NHS is one of the best health systems in the world and he understands that it has limitations.

“It is not a bottomless pit of money. One can understand waiting times,” he said.

“But it is getting to the stage where the optician is telling me that the situation is worsening. One is very fearful of sight loss. It is probably one of the most difficult things to come to terms with,” he said.

NHS engagement manager for Royal National Institute for Blind People (RNIB) Northern Ireland, Gillian Clifford, highlighted that within Northern Ireland 354,756 people were waiting for their first appointment with a consultant. This is close to one in five people within the population.

Of those who had waited a year or more, 7% were ophthalmology patients.

“It is important to remember that these numbers represent the lives of thousands of people in Northern Ireland at increasing risk of deterioration in their vision,” she said.

RNIB Northern Ireland has welcomed the introduction of ‘mega clinics’ to tackle the cataract surgery backlog as well as the reinstatement of the Cross-Border Healthcare Directive in July 2021.

This enables for patients to seek routinely commissioned treatment within the private sector in the Republic of Ireland and have costs reimbursed by the Health and Social Care Board.

“RNIB hopes that these recent initiatives will be a significant step towards a better outlook for those waiting for treatment,” she shared.

The Department of Health responds

“Patient demand for elective care services continues to exceed capacity across a range of specialties. As a result, even before the pandemic, the number of people waiting longer than the target waiting time was increasing. Following a number of dedicated waiting list initiatives, however, the number of people in Northern Ireland waiting on a cataract surgical procedure is reducing.

“Strenuous efforts are currently underway across Health and Social Care to address unacceptably long waiting times, including rebuilding activity in cataract day procedure centres and securing additional capacity by working with independent sector providers. These cataract day procedure centres are a resource for the region, working across trust boundaries to ensure equity of access, and are designed to be high volume centres for less complex cataract cases.

“A Waiting List Management Unit (WLMU) has been established to monitor patient waits and to support trusts in facilitating equitable access to assessments and treatments. In time, data from the WLMU may be used to regularly inform primary care referrers and patients around waiting times: this will allow referring clinicians to have an informed discussion with patients prior to referral, helping to manage demand and expectations.

“In addition, cataract mega-clinics have been set up in provider trusts. These facilities offer one-stop diagnosis and assessment clinics, reducing the number of patient outpatient journeys, and outpatient waiting times and lists.

“These efforts are being complemented by a new scheme which enables patients whose cataracts have been treated to be reviewed by their community optometrist, freeing hospital appointments for those needing hospital care.”