Williams Review: Recommendations and the next steps discussed 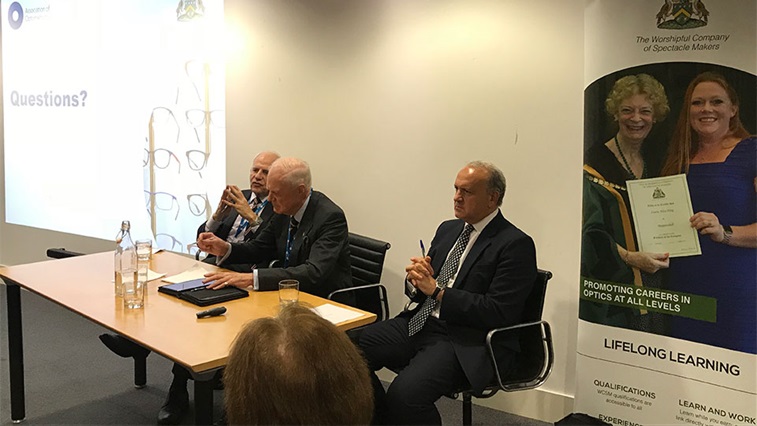 More than 45 representatives from organisations across healthcare have attended a lively event to discuss the recommendations of the Williams Review into gross negligence manslaughter in healthcare.

The event, which was hosted jointly by the AOP and the Worshipful Company of Spectacle Makers (WCSM) last month (24 October), was attended by guest speakers Professor Sir Norman Williams and Ian Stern QC, chair and vice chair of the review, respectively, and chaired by Don Grocott, past Master of the WCSM.

During the evening, delegates, which included Dr David Bailey from the British Medical Association and Dr Rob Hendry from the Medical Protection Society, had the opportunity to reflect on the findings and the recommendations made in the review, as well as discuss the next steps with those who led the review.

Key conversations during the meeting focused on consistency in explaining and applying the law on gross negligence, reflective learning and the role of expert witnesses.

Speaking at the event, Mr Stern emphasised the importance of a clear definition of gross negligence manslaughter being established and for everyone to understand the interpretation of it, which not everyone does currently, he said.

When the focus turned to expert witnesses, optometrist and AOP Board member Vivian Bush commented that expert witnesses and advisers can have an ‘elevated’ mindset, and that those acting as experts should give views that are genuinely representative of the sector in which they practise.

The GOC is one of the two healthcare regulators that has the power to call for reflective material from registrants when investigating their fitness to practise. The GOC’s recently appointed interim chief executive and registrar, Lesley Longstone, said it would be happy for this power to be removed.

The notion of ‘safe spaces’ was also discussed, with the progress that has been made in developing a blame culture into a learning one in the airline industry referenced.

Sir Norman highlighted that safe spaces can be problematic for the family of victims because they rightly want to know what happened and want to be involved in the local investigation process.

Consultant vascular surgeon, Ken Woodburn, has shared his experiences of facing a prosecution for gross negligence manslaughter with OT.

The Williams Review was commissioned in February 2018 by former Health Secretary Jeremy Hunt. Its aim was to consider the wider patient safety impact of concerns among healthcare professionals about the risk of prosecution for gross negligence manslaughter, particularly in the context of broader system failings.

Following its publication in June, the Government accepted all of the recommendations made in the review, which include improving consistency in the use of experts in such cases, driving up the quality of local investigations, and changing the powers of regulators.