The winner of the AOP Awards 2018 Optometrist of the Year accolade, Steve Clark, shares what winning means and the benefits it has brought 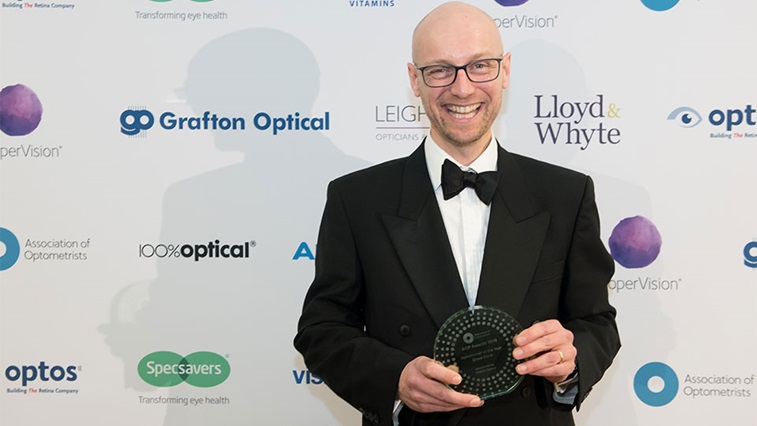 Voting for the AOP Awards 2019 is now open. It find out who has been shortlisted and to vote, visit the AOP website.

OT speaks to the AOP Awards 2018 Optometrist of the Year, Steve Clark (pictured), about what winning has means to him

One of my employers, The Outside Clinic, approached me and encouraged me to put myself forward for the award. As a relatively small company, it is keen to raise awareness of the work that it does and of its brand.

Generally, I don’t do a lot of self-promotion as I find it a little uncomfortable, but fitting the criterion and with my employer’s encouragement, I agreed.

Can you describe the awards in three words?

How did it feel to win?

I was very surprised, but very pleased for both myself and The Outside Clinic. It is a small company and therefore awards like this are important as it helps to promote its brand.

What does winning mean to you?

Winning has certainly helped raise my profile in the work that I do – I divide my work between The Outside Clinic, NHS England and Specsavers Harrogate. Since winning the award, I have certainly found it easier to make contacts and it has been of benefit when networking.

It also caught the attention of senior staff in NHS England, who noticed and have acknowledged that optometry is doing good things. In NHS England, optometry is very low down the list of priorities – it is all about doctors, it is a little bit about dentists and it is a tiny bit about pharmacists. Therefore, if we, as optometrists, don’t stand up and shout, they will forget about optometry. The award helped with this and raised my profile with my medical director, and those types of people, allowing it to raise awareness of the profession generally.

"Winning has helped raise my profile in the work that I do – I divide my week between three roles. Since winning the award, I have certainly found it easier to make contacts and it has been of benefit when networking"

What does winning mean to The Outside Clinic?

The Outside Clinic is a small company working in a niche market and the award has helped promote the fact that it does some really good work. Within the profession, it has also highlighted this as a career option for optometrists.

One of the misconceptions of domiciliary eye care is that I spend my days in nursing homes – I don’t. I haven’t been in a nursing home for a couple of months. I see individuals in their own homes who make their own decisions. I only see seven people a day and I think it is a great job. The award has helped promote this.

Why are awards important for the profession?

I think it’s beneficial to be able to shout about the good stuff that optometrists do. There is a lot of really good stuff going on in the profession and if we didn’t have awards, people wouldn’t notice it.