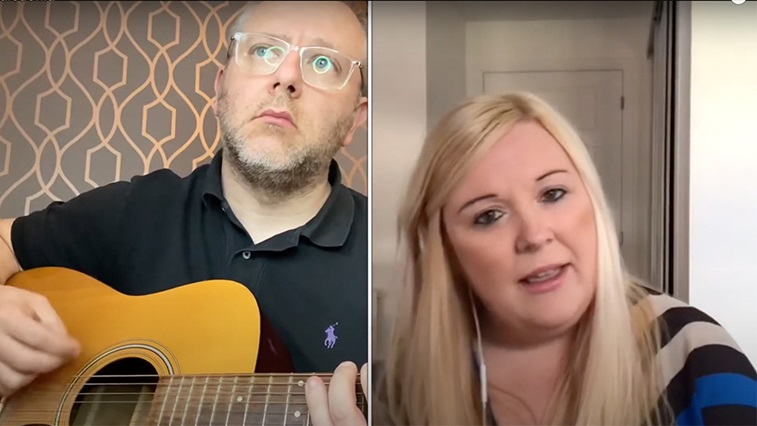 A Scottish optical practice has been using music to raise money for a local cancer charity during the COVID-19 lockdown.

Miller & McClure Opticians, in Paisley, has so far raised almost £1400 for Beatson Cancer Charity, which provides wellbeing and support services to cancer patients and their families across the west of Scotland.

Gordon Kyle, director at Miller & McClure Opticians, has been hosting “virtual performances” via Facebook along with colleague Jacklyn MacInnes.

Gordon, who plays guitar and trumpet, and Jacklyn, the singer, are raising money for Beatson by performing requested songs remotely and asking for donations in return.

Although the “performances” appear to come together quite seamlessly, they aren’t actually recorded at the same time. Instead, both Jacklyn and Gordon have been recording their separate performances on their phones – Jacklyn in Renfrew, and Gordon eight miles away in Houston.

Gordon then edits the videos together so that they can share the “lockdown performance” online.

Gordon told OT: “When I took over at Miller & McClure Opticians, we made an emotional promise to our patients that we would support a charity.

“In February we donated £5 for every £100 spent in the practice. When lockdown happened, I knew that we could rely on Jacklyn’s amazing vocal skills to continue our fundraising efforts. It has also meant that we have kept in close contact and worked as a team to help this amazing charity.”

Gordon has also drafted friends Bart Simonis, a police officer, to play the piano, and Amy Lewis, a nurse, to play the violin.

Cancer charity Beatson was chosen due to the fact that Jacklyn, an optical advisor at Miller & McClure Opticians, lost her husband Craig to cancer at the age of just 40 in 2018.

Jacklyn now volunteers at Beatson, as a thank you for the support they provided her late husband during his illness. She had previously planned to complete the 2020 Kiltwalk, which was due to take place in April but was cancelled due to COVID-19. A virtual Kiltwalk is now taking place in September instead.

Jacklyn said: “My husband Craig was cared for at the Beatson, however unfortunately passed away after a short battle with cancer on Boxing Day 2018, aged 40.

“I have been volunteering with the Beatson Cancer Charity since September 2019, which has given me a great sense that I am giving something back to this fantastic cause. Craig and I were both looked after so well during his three-month treatment within the Beatson.

“Having always been involved with music and singing for lots of different causes, Gordon and I thought it would be a great idea to team up and record videos on request in return for donations to the Beatson.

“The Beatson will always be a big part of my life. Knowing that I am giving something back in memory of my amazing husband, and also helping to raise money to help more families affected by cancer to be looked after the best they ever could be by this fantastic charity, means even more to me.”

Amongst Jacklyn and Gordons’ virtual performances is a version of Dougie Maclean’s Caledonia:

Beatson provides a number of services to those affected by cancer, including advice on staying in work or returning to it after treatment, as well as more general care and support.

As with many charities, the majority of its recent fundraising events were cancelled in light of the lockdown.

Charlene Low, corporate partnership fundraiser at the charity, told OT: “Like all industries during COVID-19, all our events and supporter events had to be cancelled.

“The team at Miller & McClure had supported us in February by donating a percentage of income from any glasses that were sold. When lockdown hit, I spoke with Gordon Kyle and he suggested fundraising using the videos of himself and Jacklyn singing, which is a great idea.

“The videos are all amazing; Jacklyn’s voice is just so beautiful. They smashed their target and I’m so grateful for everything they are continuing to do for Beatson Cancer Charity during these difficult times.”

The Miller & McClure Opticians team hopes to raise more money in the coming weeks. Their JustGiving page can be viewed here.