Optometry and the NHS: a partnership

Specsavers’ clinical services director Giles Edmonds took to the stage at 100% Optical to share with practitioners the multiple’s vision of what optometry in the UK must do to “truly” become a partner of the NHS.

This partnership is of pivotal importance for the future of optometry, Mr Edmonds emphasised, to enable the industry to achieve sustainability, despite the large number of disruptive forces that are occurring currently.

He explained that Specsavers’ strategy for partnering with the NHS is one that is based on a path that has proven to be successful for the profession in Australia.

Providing practitioners with a PEST analysis of the disruptive forces present that are impacting optometry in the UK, Mr Edmonds identified political, economic, social, technological and new competitive threats.

“They are new impacts that we can’t control and that we ignore at our peril,” he stressed, adding that as a result he believes: “In 10 years’ time optics is going to look totally different to the way it looks at present day.”

Discussing what he considers to be “one of the biggest” political risks currently, Mr Edmonds identified ophthalmologists telling government that optometrists cause them extra work because of the number of false positive referrals they make into the hospital system. “We must convince government at pace, with data and financial evidence, that we can save them money and be a reliable part of their future vision for primary eye care in the community,” he said.

In terms of competitive threats, Mr Edmonds cited the proposed takeover of GrandVision by EssilorLuxottica, which he said would create a company with a turnover of £20bn with 20,000 stores worldwide. He highlighted that the organisation already has seven internet companies operating in the UK.

“They will be able to play tunes in this market in any which way they like, which has to act as a huge accelerator for disruptive change,” he told delegates.

It is due to these disruptors that Specsavers believes optometry needs to adapt and partner with the NHS to protect its future.

Proposing the route forward, Mr Edmonds said: “The Australian stable model is where we need to be.” He then welcomed Peter Larsen, group eye health strategy director at Specsavers, to the stage to share his experiences in the country. 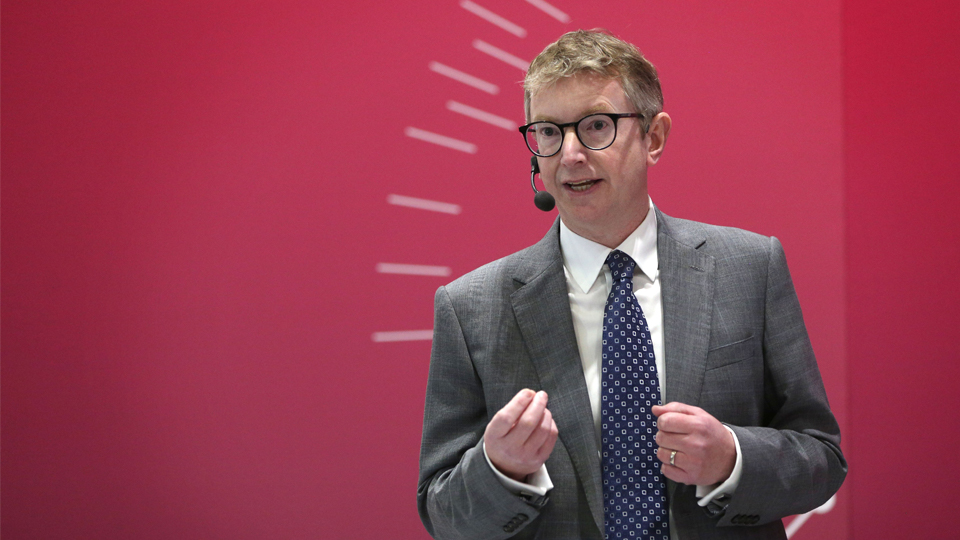 Answering the question of how the profession secured the endorsement, Mr Larsen explained that having a clear strategy that involved creating an environment in which optometry could become a proactive workforce able to solve eye health problems in every region it operated was key.

The endorsement would not have happened without data, the optometrist stressed.

Firstly, the profession had to collaborate with medicine. “We are not an island and we can’t do this stuff by ourselves,” Mr Larsen said.

Connectivity in having a consistent platform for the profession to communicate with medicine, and medicine to communicate back, was also of upmost importance.

In Australia this was achieved by agreeing pathways and the content of communication with the country’s Royal College, before working with industry to create an electronic referral platform and reporting that could be delivered to optometrists on a weekly basis. The data reports allowed evidence to be collected, but also enabled optometrists to learn and improve their performance.

The measurement of the was key to success because “if you don’t measure it, it is just opinion and no one cares,” Mr Larsen emphasised.

Returning to the UK market, Mr Larsen said: “We have to build the evidence and individuals need this evidence in order to improve their performance,” which will enable to the profession to prove its worth to the relevant stakeholders.

During the session, optometrist and director of professional advancement at Specsavers, Paul Morris, was on hand to share insight into what progress the multiple has made on this strategy in the UK.

Mr Morris revealed that Specsavers already has data points from 20 million real customers, which “tells us lots of things.” Over the past 18 months the company has worked hard to get that data into a minable format.

When collecting and analysing the data, the purpose is to “understand what it means and how practitioners can learn from it.”

The next step involves implementing a plan that enables practitioners to improve and that monitors set key performance indicators. “That is what gives us change,” Mr Morris said.

“This is what every other healthcare profession does – it looks to prove the case and then it looks to improve the outcome,” he emphasised.