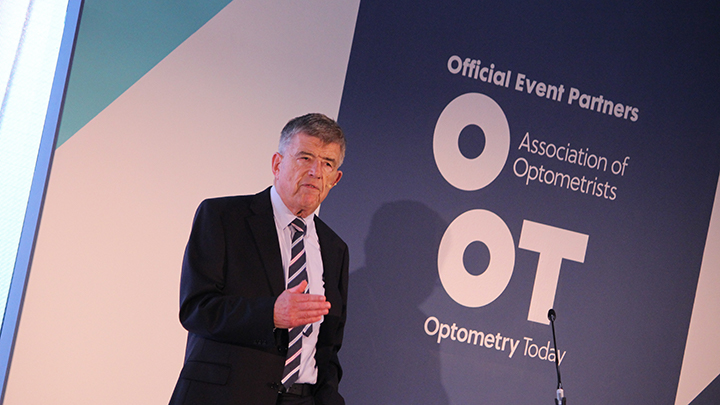 Returning to the Main Stage at 100% Optical for a second consecutive year to speak to delegates about the disruptive changes that the profession faces, co-founder of Specsavers, Doug Perkins, warned optometrists that ignoring them would be at their peril.

During the CET-accredited talk, Mr Perkins highlighted technology as the top risk factor that the profession should be aware of, listing advances in telephonic refraction and automatic refraction as areas of concern.

However, it is the NHS, which Mr Perkins described as being “in continuous crisis,” that holds an opportunity “not to be missed” for optometry.

The number of people losing their sight will rise by one third over the next 10 years, Mr Perkins stressed, while outpatient departments, such as ophthalmology, are already struggling to cope with the 37% rise in patients already experienced, he said.

And with there being just two ophthalmologists per 100,000 people in the UK, “I only see this problem getting worse unless optometry, as a profession, steps up,” he said.

Reflecting on the statistics, Mr Perkins posed the question: “Does ophthalmology belong in the hospital setting anyway?”

Using his talk to answer the question, Mr Perkins explained: “In places such as the US and Australia, we certainly see the majority of ophthalmology services taking place in a stress free, community environment.”

“When our NHS is in crisis and the ophthalmology departments are bursting at the seams, I see it as an unnecessary crisis and believe that optometry can play a more enhanced role if ophthalmology is brought into the community here too,” he added.

“We have to face the facts and accept that the current model for ophthalmology is not working,” Mr Perkins said, highlighting that in order to change this, for optometry’s benefit, “we need to change the kind of commitment and skills we currently have.”

Highlighting one issue being the difficulty that optometry faces when bidding for enhanced services through local Clinical Commissioning Groups (CCGs), Mr Perkins said: “Local Optical Committees have flatlined, they are not being successful enough in securing enhanced services from CCGs and there are still some commissioners in the UK who are not commissioning any optometry services at all. That is serious.”

Yet sharing the positive aspect, Mr Perkins said that he believed, due to the NHS crisis, optometry could and would win its place on healthcare’s “top table,” but stressed that the profession must be prepared and ready when the call comes.

“We are not ready at the moment and not enough optometrists are at the level required to offer the full scope of enhanced optometry services,” he said.

While Mr Perkins placed the current number of EOS-skilled optometrists at 500, he said that this needed to reach at least 5000 if optometry wanted to make the transition into enhanced eye care services. “I believe that we need 5000 optometrists experienced, educated and accredited to perform the full scope of optometry services.”

“The vision that that I have for optometry is to be the GP of the eyes,” Mr Perkins stressed, adding that “the current model of care is not working for GPs, ophthalmologists or us.”

“But they hold the funding and are what is standing between us,” he said.

He advised: “Therefore we need to build relationships with GPs and hospitals, maintain direct communication with ophthalmologists and grow our skill set in to order to drive forward the profession.”

“The call is going to come, as long as we are prepared for it. And to be prepared, we must educate ourselves, gain accreditation and get experience,” he concluded.