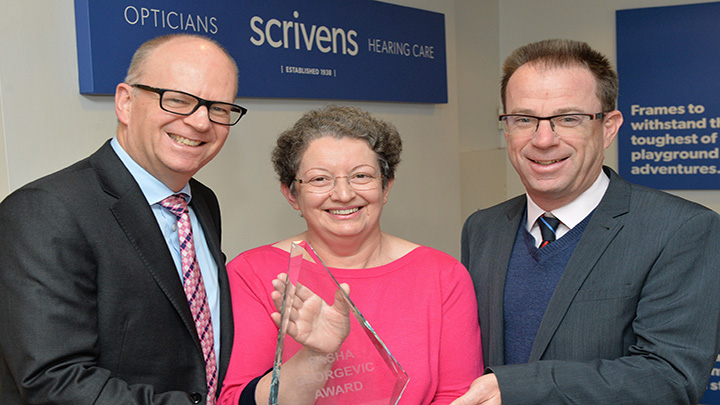 A loyal employee who has worked for almost 44 years at Scrivens Opticians & Hearing Care has been honoured with the company’s top accolade.

Accounts assistant, Cathy McBride (pictured), who is based at the company’s Birmingham head office, was praised for her ‘can-do’ attitude and dedication when she received the prestigious Sasha Georgevic Award.

The award is given in memory of the company’s late chairman, father to the present chairman Nicholas Georgevic (pictured right) and director Mark Georgevic (left).

Ms McBride joined the company in April 1973 and her service is believed to be the longest ever achieved by a full-time Scrivens employee.

Chairman Nicholas Georgevic said: “Cathy is one of Scrivens’ unsung heroes, consistently fulfilling her responsibilities to the very best of her considerable abilities. She is always positive and a worthy recipient of the award.

“Her modesty in the way she goes about her work, the loyalty that she shows to the company and her accuracy are her standout qualities.”

Mr Georgevic added: “Cathy is also a very thoughtful and consistent supporter of her colleagues.”

A delighted Ms McBride said: “It was such a shock to receive the award, and it’s a proud moment too. Scrivens has grown so much since I joined but it still feels like a family firm and I feel a part of that family.”

The long-serving employee not only knew Sasha Georgevic, she also remembers the company founder, his father, Solomon Scriven.

The Sasha Georgevic Award is open to all Scrivens’ employees with a minimum of five years of service, and nominations are made by colleagues.

The final selection is made by Nicholas and Mark Georgevic, based on outstanding contribution to the business and customers, total commitment and all-round dedication to the company.