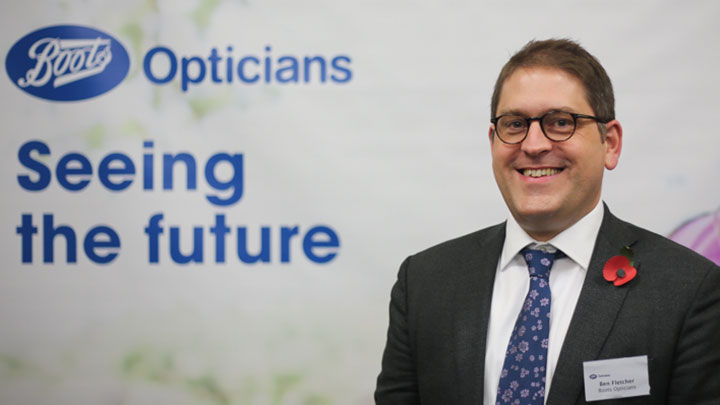 Boots Opticians is urging practitioners working in other multiples and in independent practices to support its green paper calling for improvements to children’s eye health provision in the UK.

The multiple published its vision for children’s eye health provision in its 60-page green paper, Seeing the future, on 2 November. The report urges parliamentarians, policy-makers, health commissioners and the optical sector to work together to implement its recommendations.

The report urges mandatory commissioning of a fully funded vision-screening programme for all children aged four to five.

The green paper was officially launched with a letter in The Times and filming with ITN, followed by an evening event in Westminster with parliamentarians, NHS England and optical representatives. It also featured a panel discussion about the issues, including Public Health England.

Boots Opticians managing director, Ben Fletcher (pictured at the launch event), said: “We know that so much more can be done to reach and identify vision problems in our children, thus giving them an equal start in life.

“Having good vision can help children to perform better at school, become more involved in sports and grow in confidence.”

He emphasised: “Boots Opticians cannot fix this problem alone. I believe that partnership and collaboration is the key to making a significant impact on the long-term life chances, health and wellbeing of children both now and in the future.

“This is the goal that we are working towards and investing in. This green paper is one more step towards achieving it,” he concluded.

In an exclusive interview with OT, he described the green paper as “an authorative one stop shop.”

Under a section headed, How to achieve our full potential, the report encourages practitioners to invest in up-to-date technology to deliver accurate eye examinations for even very young children.

It urges them to consider their local demographics and to ensure that their services are designed to meet the needs of children and young people.

The green paper adds that “providers should ensure that their colleagues have the appropriate training, not only to use new technology for checking children’s eyes, but also to have the skills and confidence to communicate with parents, children and young people.”

It concludes: “Providers should ensure appropriate clinical training and regular exposure is available to ensure optometrists are confident and skilled in performing eye examinations on younger children.”

Asked by OT if the green paper was the company’s response to the legal case involving the company’s locum optometrist Honey Rose, Mr Fletcher emphasised that the work on the campaign “pre-dates the case.”

He added: “Of course our thoughts have always been with the family over this appalling tragedy, but what this case shows is how imperative it is to get this right.”

He continued: “We are determined to keep going on the issue of children’s eye health and are well placed to make a possible difference. We have 6000 people to make sure people in influence understand.”

Mr Fletcher explained that the publication of the report and the launch event were just the start of the dialogue with organisations to partner with.

He added that the multiple would be “taking forward” its current relationships such as with the Literacy Trust, and would be continuing its dialogue with the Institute of Ophthalmology, as well as hoping for future discussions in Wales, Scotland and Ireland.

Explaining the background to the report, Mr Fletcher told OT that, with the company’s healthcare background, people expected the company to take a leadership role.

“Our ambition with Boots’ clinical history is to enrich the lives of every person, focusing on how we would make optometry more accessible to the under 18s.

“Sight issues are ironically not seen. It’s not always obvious when a child is having an issue with their sight.”

With enthusiasm, he added: “Optometrists can transform lives. Patients can have an eye test that detects a tumour or glaucoma and can even save someone’s life.

“They can take a patient who doesn’t like wearing glasses and, by working with them, can give them a sense of being and build up their confidence. This can make a massive difference and enrich their lives.”

Highlighting the company’s commitment to children’s eye care, Mr Fletcher revealed that Boots Opticians has given away half a million copies of the children’s eye check story book Zookeeper Zoe for free and that its website has attracted 100,000 visits.

He said that the company offers employees two days off for doing volunteer work in schools to raise awareness on eye health and improve literacy.

The multiple is improving practice environments, Mr Fletcher added, with its Peterborough and Wimbledon stores “creating special areas for youngsters.”

Mr Fletcher explained that the company was spending its television advertising budget on raising awareness, revealing that over one-and-a-half million school-aged children in the UK have an undiagnosed problem with their vision.

“We thought it was one million so that was a real call to action,” he explained, adding: “We took the opportunity to pull a lot of knowledge together and to point out a route forward.

“No one organisation can solve these issues on its own. What we are hoping for from the launch of the green paper is that people will want to work with us and to ask themselves, what can we do about this?”

“The green paper opens the dialogue and we’re hoping that people and organisations might say that they can act on parts of it,” he concluded.