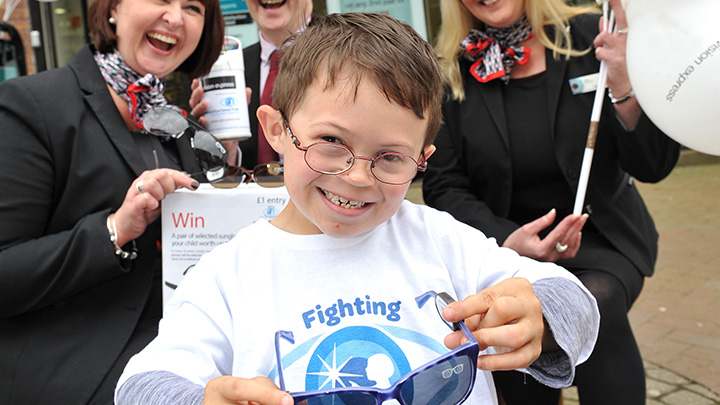 Children across the UK who have battled a rare eye cancer are joining Vision Express this week to launch a sunglasses giveaway marking World Retinoblastoma Awareness Week (8–15 May).

Survivors of retinoblastoma aged from one to 18 years old are visiting selected Vision Express stores to rally support as the multiple offers the opportunity to win two pairs of sunglasses, one for adults and one for children, at over 380 of its UK outlets.

The competition is being launched in support of its charity partner The Childhood Eye Cancer Trust (CHECT) and its #inthedark campaign to raise awareness of the signs of the disease.

The initiative follows research commissioned by CHECT for World Retinoblastoma Awareness Week, which reveals that less than one in three parents have ever had their child’s eyes checked, with half of parents unaware that children could get eye cancer.

“Parents usually know when their little one is unwell but with retinoblastoma, children often seem perfectly happy and healthy so it’s much harder to spot. We want all parents to be eye aware and to take their child to see a health professional if they have any concerns at all,” he emphasised.

The multiple’s partnership with CHECT was formed in 2010, with initiatives raising awareness and funds for the charity.

The raffle will offer selected ‘Exclusive Brands’ sunglasses from the recently launched Vision Express collection, which offers alternatives to designer sunglasses, with frame prices starting at £39.

‘My daughter lost her eye’

The initiative is being supported by Eliza Thomas, who was a three-year-old when she was diagnosed with retinoblastoma following a routine visit to Vision Express last October.

Just a week later Eliza had her eye removed to save her life, with her mother April Thomas later learning that her daughter had been going blind in one eye for months without anyone knowing.

Ms Thomas, from Westminster, London, took Eliza to the Vision Express Oxford Street store because she had a squint that seemed to be getting worse.

During the eye examination, the optometrist spotted what looked like a tumour growing in Eliza’s eye and referred her to hospital immediately. Eliza now has an artificial eye.

Ms Thomas said: “I want all parents to be aware that children can get cancer in their eyes. If you notice anything unusual about your child’s eyes, don’t just assume it’s nothing – get it checked out to rule out anything serious and don’t give up if you think something is wrong.”

Vision Express was the first optician in the UK to roll out a protocol to ensure a quick and effective referral if retinoblastoma is suspected. The latest study by CHECT shows that opticians are now taking the appropriate steps to refer the condition in 100% of cases.

You can watch Vision Express' video about Eliza's story below.