Colin Davidson, a contemporary artist whose portraits have included famous faces from Ed Sheeran to Queen Elizabeth II, tells OT  about the important role frames play in enhancing the eyes

My spectacles are a mixture between being a means to an end for my close work and an addition to enhance my face. At the minute, including sunglasses, I probably have 16 pairs of frames.

I travelled quite a lot before March last year and with a lot of places I visited I made a point of going to a sunglasses shop to buy a pair, so there is a bit of a story behind a lot of the sunglasses that I have. I have a pair of Oliver Peoples ‘Cary Grant’ sunglasses that I brought in New York and another pair I brought in Sicily. I’ve ended up collecting a lot of Oliver Peoples glasses over the years. There is just something about the way they are made and the retro-style. I think there’s a humour to the ‘Gregory Peck’ glasses because they are very much the Atticus Finch glasses that were worn in the To Kill a Mockingbird film. Whilst it is only me that sees them most of the time it’s still important to me that my reading glasses are beautiful and well-made in their own right.

What frame shapes, colours or styles do you usually go for?

I tend to go for more neutral, earthy tones that work with my skin colour and hair. A lot of them would be terracotta, tortoiseshell types of colours. The ‘Cary Grant’ styles I have are an olive green. I probably steer clear of very fine metal glasses and I also don’t tend to suit frameless styles. If I’m going to wear glasses, there’s no point in hiding the fact that I’m wearing them with a frameless pair. Having painted people wearing glasses, I love the statement that a personally-chosen frame can give.

It’s very important to me that the frames don’t take away from what is one of the most amazing, beautiful things, which is the eye

I dip in and out of having a favourite pair. I’ve been wearing my ‘Gregory Peck’ frames quite a lot over the last couple of years. They tend to suit my face well and they are comfortable, so whenever they introduce a new colour in that frame, I’ve tended to buy it. I do like the nods to the 40s and 50s. I love that retro, timeless feel, rather than something ultra-fashionable that speaks of now.

Would you have a style icon of glasses wearers? If so, who would you pick and why?

It’s a cliché but the Beatles were a big part of my early to mid-teens. I was born towards the tail end of when they were together and I thought John Lennon was the coolest person. There was something about the way he wore those very simple, almost NHS glasses. They were deliberately round because lenses were that shape, and it was almost like an anti-style comment in wearing them. Of course, since then he has made that style of glasses eternally cool.

For me it was looking at somebody who was able to integrate the necessity of having to wear glasses – in a pop culture where it probably wasn’t cool to need to – and to make it super cool. The first pair of glasses that I owned in my early 20s was a round pair and I was definitely trying to emulate him.

If I’m honest, in my 20s I didn’t need to particularly wear spectacles, but I wanted to wear these round frames. I had my eyes tested and there was a very slight prescription required. I then spent a lot of years where I didn’t wear glasses at all, but when I hit about 40, I realised I needed some help when I was painting and reading. Now I have no choice but to wear glasses for close work.

How important is eyewear to reflecting your personality?

Being a portrait painter, I’m very aware when I look at people that we communicate through our eyes. We get to know somebody, and we recognise people, through their eyes. I feel that prescription glasses need to enhance that, but so often they can detract depending on the style of the glasses frame. It’s very important to me that the frames don’t take away from what is one of the most amazing, beautiful things, which is the eye.

I bring that into what I choose for myself. I always want to reflect my character. It’s an addition to who I am, rather than redefining or putting a façade up over who I am. 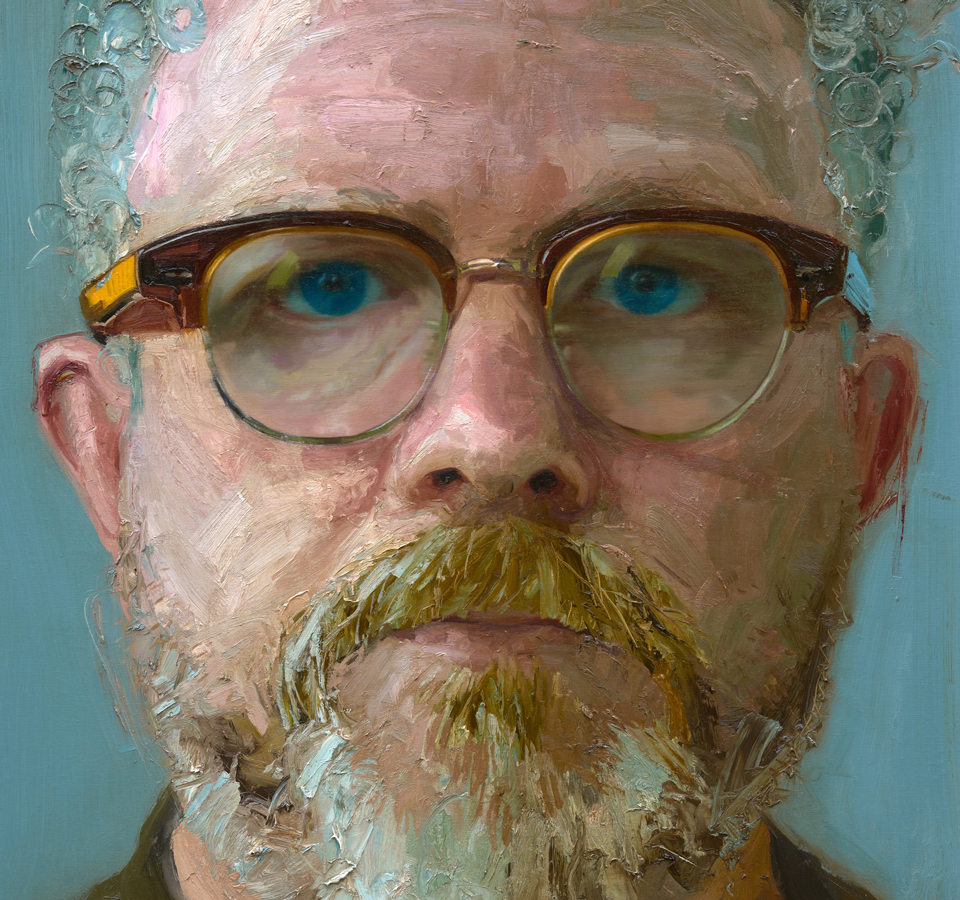 Your piece in the Ruth Borchard Self Portrait Prize Exhibition 2021 is titled, New Glasses. What made you decide to incorporate your frames within the piece and what was it that stood out to you about the frames and the ‘window’ they presented?

When you’re wearing glasses, you are putting a sheet of glass – albeit a lens – in front of your eyes and so in some ways there is a barrier between your eyes and the outside world. That can be a protective thing at times, and it can be a psychological barrier, for example, to allow people to read your eyes or to get to know you too well.

What I was hinting at in the self-portrait was that in some way, the glasses were the subject of the painting. The painting is even called New glasses. It is me, but it’s me wearing the glasses and the eyes behind the glasses are deliberately slightly blurred. I’m asking the question; what is it that is behind there?

There is a duality of me looking out from behind my glasses at myself wearing those same spectacles, which actually act as a barrier to seeing back again.

The eyes are the most important part

Your portraits have included a number of iconic and famed faces – have any spectacle-wearers particularly stood out to you?

There is one particular portrait that really stands out. During a sitting, when the person and I are in the same room and I’m making my drawings, I’m looking for the moment when somebody is totally relaxed in themselves.

I was painting an Irish poet, Paul Muldoon. I always associated him with his thick horn-rimmed glasses. He was wearing the glasses that day and as we were chatting, he put his head back, let out a sigh and closed his eyes. I realised that was what I was going to paint.

It’s the only portrait I’ve painted of somebody with their eyes closed. It needed the horn-rimmed glasses as a frame, and almost a substitute for the eyes.

What are your top three tips for selecting the right pair of frames?

Behind the scenes: painting the eyes

You have written previously that while you use a palette knife for most of a painting, you tend to paint the eyes in a different way. Why is this and how does it create the look you want to achieve?

I spend more time on the eyes with a much finer paintbrush. The way I make portraits is the opposite of the way a photograph would capture someone’s face. A photograph looks at every pixel and treats it in an equal way, so everything is as focused as everything else – the tip of the nose, the lobe of the ear, or a lock of hair are as important as the iris of the eye. But that’s not why we engage. You don’t recognise someone because of the colour of their chin, you recognise them because you recognise their eyes.

It’s important to me that I paint people in the way that we engage, which is eyes first, and then everything else falls by the wayside and can be as loose or amorphous as I want it to be. The eyes are the most important part.