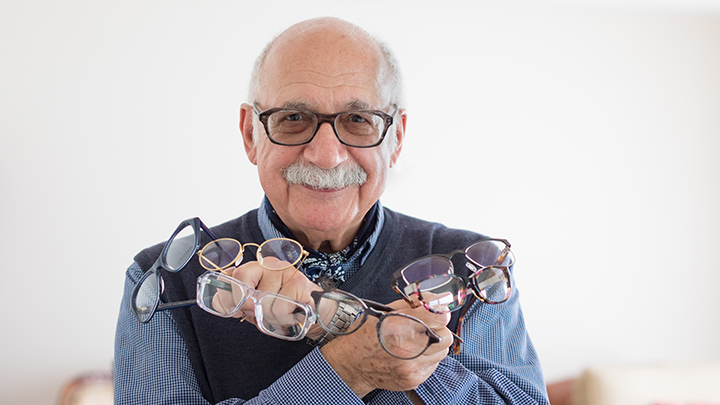 Can you describe your first pair of spectacles?

My first pair of spectacles were a frame called the ‘Gresham Black T.T.’ –  back in the ‘50s my father used to distribute them.

Do you have a favourite pair?

It has to be one of my designs called ‘Murphy.’ I designed the oversized frame in the ‘70s and wore it in clear crystal. I loved it so much and told everyone that it was the ultimate frame for me and I was going to wear it for the rest of my life.

Eventually crystal goes an off-yellow colour so I put 10 pairs aside for future use thinking that I had enough pairs to last me 10–20 years. Unfortunately, when the company was divided in two in 1989 and we moved premises, they disappeared. While I now tend to mix it up more and wear much smaller frames, we did re-release the style in Japan some years later so I do have a pair, but it has once again been discontinued.

Who would you pick as your eyewear style icon and why?

Michael Caine because he was the first person I designed a frame for that appeared in a film.

I had a phone call from the production company that was making a film called The Ipcress File. Michael Caine’s character in the film, Harry Palmer, wore black glasses and they needed a pair of frames that he could wear to sneak a secret message out of East Germany in. To cut a long story short, while he didn’t wear the frames I designed for this purpose, he did wear another design of mine called the ‘Consul,’ which is still one of our best sellers today.

I tried contact lenses when they first came out – they covered the whole eye and I found them very uncomfortable. By the evening my eyes were always so sore that I had to take them out. After that I decided that I preferred spectacles and have never gone back to contact lenses.

How long have you worn spectacles for and what promoted you to go for your first eye test?

I’ve worn spectacles since the age of 10 when my parents took me to the opticians for a sight test after I complained that my distance vision was blurry. On being told that I needed spectacles, I probably thought “oh no, people are going to call me four-eyes.” But my father wore glasses and my mother too for reading, so while it was strange at the time, I understood when I was told that wearing my glasses now would stop my sight deteriorating as quickly.

"I designed the oversized frame in the 70s and wore it in clear crystal. I loved it so much and told everyone that it was the ultimate frame for me and I was going to wear it for the rest of my life"

How has the eyewear business changed during your time in the profession?

Eyewear has progressed from being a medical necessity to a fashion accessory – you only have to look around the trade shows to see all the colours and wacky styles. This is a really positive thing, as if it had not occurred, we would all still be wearing the same NHS frames.

During and after the war, spectacles were just a medical necessity and fashion hadn't reached the big wide world. My father was probably one of the biggest instigators in the UK for helping change this by designing frames that would make glasses more desirable to wear and make wearers look more interesting.

How has frame design changed during your time in the profession?

Frames have become much larger as Rx lenses have been made bigger and as CR39 plastic has been introduced. Now, in the 21st century, retro is all the rage. As I have a back catalogue of over 600 designs, we are selecting a few to re-release each year through our licensees in the UK and Japan.

The Oliver Goldsmith company celebrates its 90th anniversary this year. Are you doing anything to mark the milestone?

Yes, we are launching a limited edition version of the ‘President’ frame in a dense black colour. Enhancements include a metal bar in the top of the plastic, which has then been coated in palladium and 18 carat gold. This metal was also extended into the sides. All of the joints are also 18 carat gold plated too.

We are only making 90 pieces, which will each be numbered. They will come with a special presentation box and be accompanied by a certificate and limited-edition case.

I’m sure they will become collectors’ pieces and will increase in value over the coming years. I encourage opticians to purchase at least two, one to sell and one to have on display.