Cake celebrates the recipe for success

A major milestone was celebrated with over 370 independents last week – the 10th annual Optix Software conference.

The event was held at the five-star Celtic Manor resort in Newport, Wales (13–15 March) and was applauded as the “biggest and best” conference to date.

To mark the 10th anniversary, there was a special line-up of speakers at the conference and a huge cake was presented on stage to Optix Software managing director, Trevor Rowley.

Mr Rowley, who owns Viewpoint Opticians in York, invited many of the original 31 Optix Software customers, who had attended the first conference that was held at Kilworth House in Leicestershire, onto the stage.

One of them was Jeremy Heynes, managing director of Barracloughs the Opticians, which has eight practices across East Sussex.

He told OT: “Having been with Trevor virtually from the start and attending the very first conference when there was only a few of us, it’s remarkable to see the growth over the last 10 years.”

Another long-term customer is Colin Perrott, of VisionCare Optometry in York and Castleford, who said: “This is by far the biggest and best Optix conference.”

He added: “It’s great to be part of Optix and be privileged to have access to some of the country’s greatest achievers at the conference, which never fails to disappoint.”

Richard Llewellyn, of Turners VisionCare in Somerset, described the conference as: “Brilliant – a not to be missed event in the optical calendar.”

The speaker programme opened this year with Sir Ranulph Fiennes, OBE, who is described by The Guinness Book of Records as the world’s greatest living explorer.

He shared astonishing tales of his life-threatening expeditions as the first man to reach both poles by surface travel. He was the first to cross Antarctica unsupported and the oldest Briton to climb Everest. He also ran seven marathons on seven continents in seven days. Sir Fiennes met with delegates afterwards, signing limited editions of his book, Cold.

British sporting legend, Sir Clive Woodward, OBE, inspired the audience with useful tips on how to create a winning mindset and an optimum team.

Sir Woodward famously guided England to victory in the 2003 Rugby World Cup and has supported the national coaches and athletes at the Beijing and Vancouver Olympics, as well as helping to deliver Team GB’s successful Olympic Games in London in 2012. 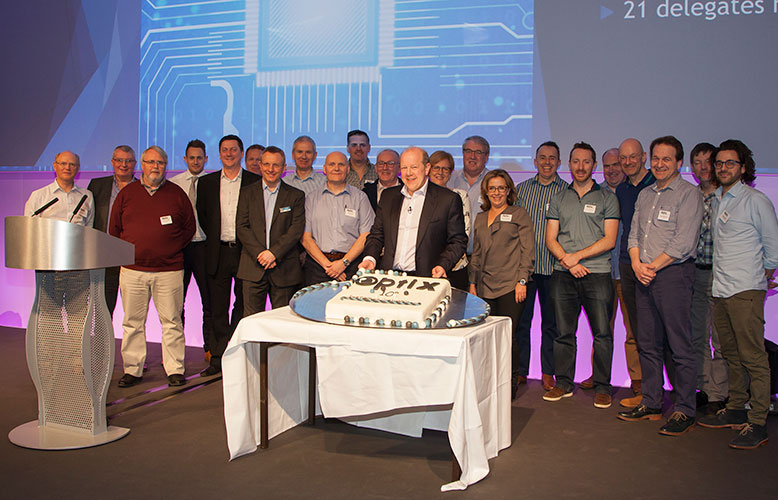 BBC’s business reporter, Steph McGovern, gave her insight into the state of the economy and where we are heading post Brexit and on the High Street.

Highlighting the current uncertainty in the economy and the business world, she emphasised: “The best businesses are not letting the uncertainty paralyse them.” She explained that they were looking at what they could do now to grow, to innovate and to embrace the “disruption from technology.”

The final speaker of the three-day event, Professor Brian Cox, OBE, one of the UK’s best known physicists, was eagerly anticipated and gave a fascinating explanation of the origin of the universe, overrunning his slot to the delight of delegates.

Mr Rowley, who has the task of finding new world class speakers each year for the event, said: “Perhaps I’m going to have to dig up Elvis for next year’s conference because I honestly don’t know how we’ll match these incredible speakers in 2018.”

He emphasised: “However, what matters most to me, is not how big Optix Software has grown, but that we’ve created a large family of friends who are now our customers. We have had such a great few days and I look forward to welcoming everyone back in 2018, with hopefully some new faces too.”

In a first for the conference this year, the host was not Mr Rowley, but stand-up comedian Diane Spencer, who was a big hit with delegates, giving a fresh, funny and often risqué introduction to each speaker.

On the social side of the event, German comedian Henning Wehn provided the Monday evening entertainment (13 March) and on Tuesday (14 March) the Bogus Brothers got everyone up dancing into the early hours, loosened-up by practice owner David Bennett’s wine tasting event held throughout dinner.

At the conference, Optix Software announced some new integrations and functionality within its practice management system. This included the new Optix Hub – a revolutionary system to link Optix product catalogues directly with industry suppliers.

Improved patient search functionality has also been added to the software, along with the linking of family members, as well as numerous clinical enhancements and the ability for practices to email receipts.

Many delegates at the conference attended a workshop given by former conference speaker, entrepreneur Kevin Gaskell, who has led Porsche, Lamborghini and BMW.

The renowned businessman is also an adventurer and was back by popular demand to talk about his experience in turning around failing companies.

Another workshop at the event covered VAT for opticians. There were also sessions on optical coherence tomography in practice and the benefits of interdisciplinary teamwork.

Mr Rowley concluded the event by thanking delegates for their generous donations to the SeeAbility charity, which campaigns to improve eye care for people with learning or multiple disabilities. Over £6,000 was raised during the gala dinner and Optix Software added a further 25% to boost the final total.