Safilo reduces the use of palladium in production

It’s our 30th anniversary next year and over that time the organisation has changed, developed and progressed enormously. This new name is going to better reflect what it is that we do compared with our previous name.

It’s an acknowledgement of what we’ve evolved into. When Desmond Fonn opened up the centre, for the first 10 years we carried out clinical trials, contact lens trials, and contact lens solution trials. Then when I joined 20 years ago, I was tasked with opening the biological sciences lab.

What we’ve seen over the last decade is a marked expansion in the areas of microbiology, toxicology, drug delivery and far more basic science in the biological sciences, plus an expansion of our educational areas.

Is this a move away from contact lens research?

We certainly do not want anyone to think that we’re moving away from contact lens research. That’s not what we’re intending to do. It will absolutely remain a core focus for us. It’s an expansion of the offerings that we have and acknowledging our capabilities rather than a change of focus. Our core business focus has been and will continue to be on contact lenses.

We’ve been working to expand our work with other industries. Interestingly, when we’ve given presentations, particularly to pharmaceutical companies, they’ll ask us why we’re called the CCLR when it’s not just contact lens research that we do. We were finding that the name was hampering our ability to open up new relationships because people outside of our industry believed that all we work on is contact lens research.

A new logo has also been revealed, can you tell OT about what it represents?

The logo has two characteristic factors. One is that it looks broadly like an eye, which is the focus of what we do. But it also has three very separate colours. We have three sub-brands, which are biological science, clinical trials and education. We feel all three of those are equally important to our mission as we move forward.

A mural has also been created to celebrate the 30 years of the company – how did this come about?

We were trying to find a way of acknowledging the fact that we are only where we are because of collaboration. We are only as good as the collaborators that we work with. The mural is an opportunity for the many people that we work with to contribute to something that we will keep in perpetuity.

Attendees at the American Academy of Optometry conference (11 October, Chicago) were invited to come and make a brush stroke. We’ve commissioned a fantastic artist, John Park from Los Angeles, who will turn these thousands of brush strokes into an image that will be hung at the school of optometry and vision science at the University of Waterloo as a reminder of the many collaborators that we’ve worked with. 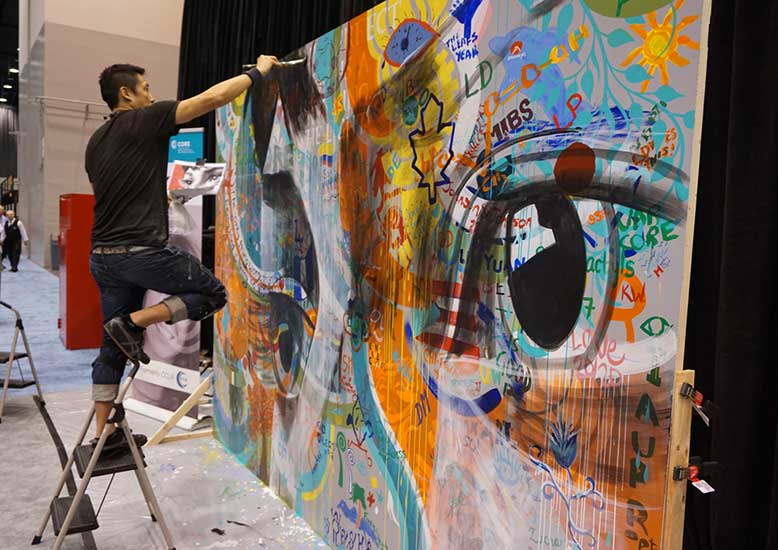 What are some of the highlights of the past 30 years?

The main highlight is the person that came up with this idea to begin with. Desmond Fonn came from South Africa as an optometrist and became a faculty member at the University of Waterloo. The director at the time said that the university should open a North American research centre. At the time, there was only the Brien Holden Vision Institute in Australia.

Des had no experience and was very much a private practitioner. He started with three people and one consultant room. He built it into one of the most successful contact lens groups in the world. The vast majority of products that come to market, at some point or another, have come through our hands.

Casting your eyes forward, what would you like to see CORE achieve in the future?

I would love to see us expand into the areas that will really revolutionise the contact lens business. I think we’re in a bit of a rut in the contact lens industry at the moment. We’ve come through the silicone hydrogel phase and now we need to think about what’s next.

In the short term, I think this will be in myopia control. Myopia control has been through soft lenses, spectacle lenses, and educating clinicians about its importance. What we need to do now is take the science that we and other groups do and translate that into information that practitioners and patients can use in an easy format.

Before we know it, contact lenses that are able to deliver drugs to the ocular surface will be here. There is a lot of work on electronic lenses, which can diagnose diseases, and anti-bacterial lenses. I certainly see CORE as a major player in the industry looking at those areas.