A girl and a guide

Amit Patel never saw himself as a guide dog owner. Taking Kika’s harness gave him not just confidence and independence, but a new member of the family

It got to the point where my body couldn’t take it any more. Every time we did a transplant, it was trying to reject it, even with immunosuppression medication. Even now, my eyes feel like someone’s rubbing chilli powder in them 24/7. When I have a bad day, I have a really, really bad day.

Picking up the harness

My guide dog Kika came to us in September 2015. When I lost my sight, my wife Seema and I never, ever thought about guide dogs.

My wife and I knew that the charity Guide Dogs offers more than guide dogs, such as additional white cane training and a service that helps family and friends to guide a visually impaired person. We had a couple of meetings with Guide Dogs, and my wife decided that she’d like to become a volunteer.

One day she picked me up so I could tag along and meet some of the team members. We got to the office and I met the engagement officer, Dave Kent, who is completely blind too.

He came and introduced himself, he said to us ‘Don’t worry, we’ll look after you. But how are you doing, Seema?’. This was the first time that anybody had put my wife first. I thought, this is an organisation that actually knows what I’m going through. Whenever we go out, it’s all focused on me, whether I want it or not.

So we applied for a guide dog, and went through the four-month assessment. You need to be very confident with a white cane, and go out regularly, as the dogs need exercise.

"When you see her off the lead, she's a normal Labrador...But the moment the harness goes on, it's like she's put her uniform on. She's in full work mode"

I was told it could take up to two years to be matched to a dog. We’d settled down to wait, and then six weeks later we received a phone call. It was completely out of the blue.

After a week at home, everything seemed good. Then we were at a hotel doing our training together – so it’s a new environment for me and for Kika.

On the third day I got up, and I found Kika was standing in front of the bathroom door. Normally, she’s not up at that time. I’m asking her to move and she’s absolutely refusing. It takes me half an hour to manhandle her out of the way, and when I open the door I find the bathroom completely flooded. That’s when I knew it was a good match. 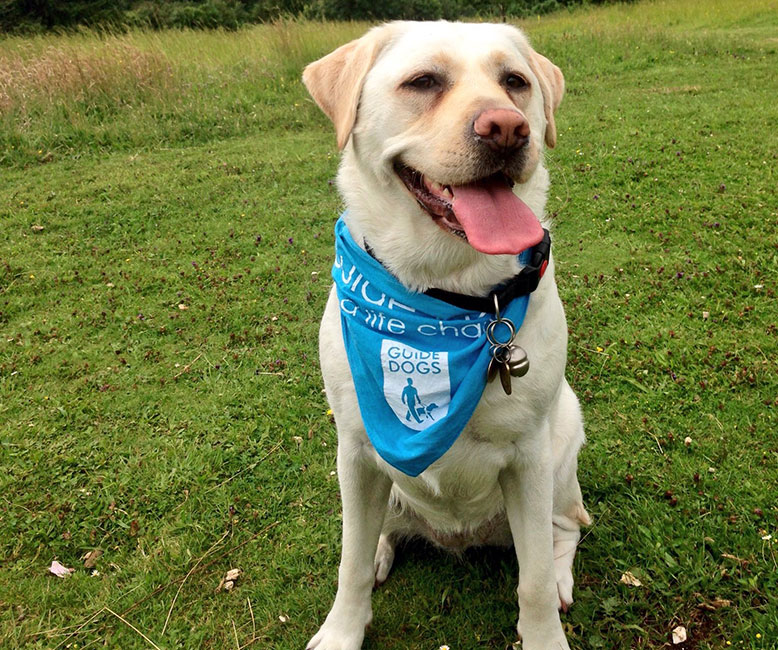 When you see her off the lead, she’s a normal Labrador. She’s a crazy, dipsy, scatter-brained kind of girl. But the moment the harness goes on, it’s like she’s put her uniform on. She’s in full work mode.

She picks up a lot of things on a daily basis. We were at London Bridge station the other day and at the large barriers there is normally always a member of staff so I can confirm the right platform, but there was nobody there at the time, so I told Kika to find me a member of staff. She walked through the station directly to a member of staff. That hadn’t been taught to her.

She loves busy environments and weaving in and out of people. In stations, we feel people running around us trying to get to the next escalator before we get there. But if Kika sees that, she just increases her pace.

She’s also very protective of our son. When I walk around with him in the baby carrier, every 60 seconds or so, my wife says that Kika looks up just to make sure the baby’s still there. She’s the older sister to her younger brother in our household.

It gives me so much confidence, knowing there’s someone there that’s looking out for me.