Eye of the storm

While some venture to sun-soaked beaches for their holidays, locum optometrist Jason Searle chases hurricanes and thunder 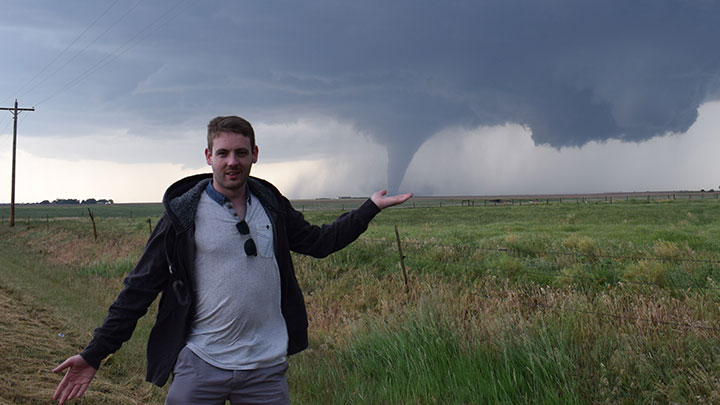 I was involved in a big storm in Bristol when I was younger that terrified me for years and years. I was about eight at the time and it was a pretty big one by UK standards.

We were in a field and there were forks of light coming down at all angles illuminating the sky. I can remember trying to keep the rain out of my eyes. I had not long had my first pair of glasses and that was part of the problem – trying to keep my lenses clean so I could see what was going on.

When I was younger my three biggest fears were lightning, spiders and dolls. I can manage spiders, storms and lightning now but I still haven't really gotten over my fear of porcelain dolls. Storm chasing has proven that going out and facing your fears can help overcome them. I used to worry about a storm coming and now I get disappointed when there isn't one.

For me, the perfect storm is where you see everything – large hailstones, lightning, tornadoes, strange colours in the sky – and it doesn't do any damage or hurt anyone. I think one of my overriding memories from my first storm chasing experience in 2015 was nearly being struck by lightning. It struck about 15 metres away. We felt the air heat up, we heard the bang and then we saw the light. In Kansas last year I saw so many tornados – picturesque ones, classic tornadoes like you would see in the film Twister. At one point we were 300 yards away from a tornado vortex. The wind was like sticking your head out of a car on the motorway. I nearly lost my glasses and all of my pictures are blurry, but it was an incredible experience.

Most people think tornados are the biggest risk but, actually, it’s other road users. It’s a popular hobby, and when people are watching the storm they might not be paying as much attention to the cars around them. The second biggest risk is lightning. If you can hear thunder, then you are at risk of being struck by lightning. There’s no telling where it will strike. You could be happily watching the storm and then the next minute you’re on the floor.

The calm before the storm

My girlfriend and my family do worry about me. I think I've given my mum a couple of heart attacks. Every time I go back out storm chasing she says 'You've seen one now, you don't have to see any more.’

When patients talk to me about their holidays I share mine with them. It’s a good way of building rapport. When I come back, my regular patients ask: 'How did it go?' They want to know more about it.

Storm chasing is a good way of switching off. It is nice to go from worrying about the fine details of life to being out in the world, in nature, and not having to think about anything other than survival. If there is lightning around, I am completely at one with the world.