Kurdistan is an autonomous region of northern Iraq and, as a consequence of the Isis crisis, is currently home to 1.5 million displaced Iraqis and 280,000 Syrians. Boosting the region’s population by approximately 30%, the Kurdish Regional Government has confirmed that outside assistance is needed to help stabilise the area after such an influx of people.

As British-born Iraqi-Kurds, and now fully qualified optometrists, my brother and I make annual trips to the Kurdish region to see family and friends.

Currently in the relatively early stages of our careers, we decided that during our trip this year we wanted to lend our skills to do some good for the local communities affected by this crisis.

Planning for the trip

Ahead of the trip we secured more than 300 pairs of donated spectacles and ready readers, many of which came from Maurice Gildersleeves of Co-op Opticians, while the optical equipment we required was offered to us by equipment supplier Eastern Optical.

"They had left everything behind when fleeing, including glasses. It really put things into perspective for us and made us appreciate our own way of living"

Kitted with our equipment and 349 pairs of spectacles, we travelled to the town of Koysinjaq where there is a small camp that houses approximately 250 refugees of mixed gender and age, ranging from babies to the elderly.

The day before our intended clinic opened, we met with the camp’s leader who agreed to let the refugees in the camp know that we were there and that we would be happy to see anyone with any eye problems.

Arriving at the camp the next morning, we set up a testing room in a small shed where we would be based for two days. The aim was to test people’s sight to see if spectacles were needed, and to perform a basic health check to ensure there was no ocular disease.

The camp leader had a list of 72 people from the camp who needed their eyes tested, the youngest being three months and the eldest 90 years old. Without any prior experience of charity work, we found the biggest challenge was to implement a routine that ensured we saw as many patients as possible in an efficient manner. 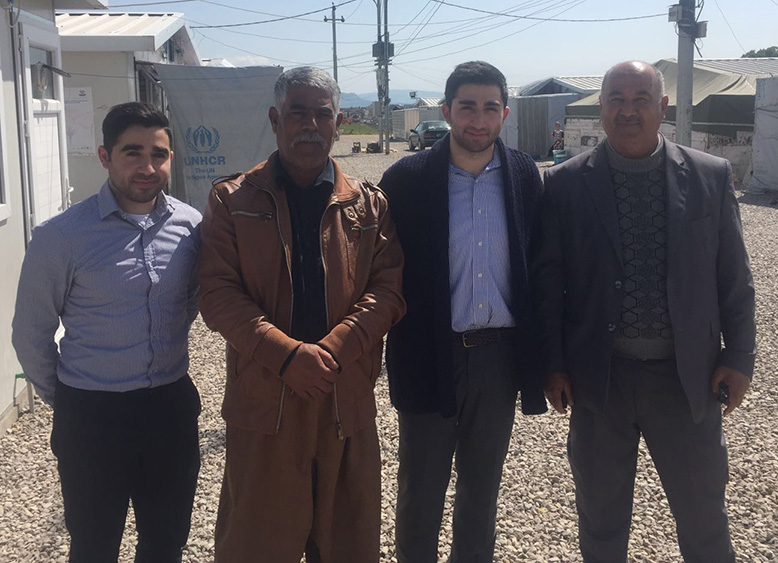 Our intention was that every patient we saw received refraction and an eye health check. After a bit of trial and error, we found that the most effective routine was where one of us would perform retinoscopy, and the other would carry out the eye health checks. If any patient needed spectacles, we then looked through our inventory and supplied them. If any pathology presented that we couldn’t treat, for example, a cataract, it was written up on paper for the patient to keep for future reference.

While we were seeing patients, news spread within the town of our presence and a crowd, which included local media, started to form outside of the camp. We took a brief break to give interviews with some journalists on the basis that publicity will be good for future visits before getting back to seeing patients.

The second day at the camp went a lot smoother, yet the list of patients had increased by another 40. The camp leader explained that, initially, people had been suspicious of our presence, but after speaking to people that we saw on the first day, realised that we were there to help.

One case that stood out for us was a very shy 10-year-old girl with myopia and infantile esotropia. Her father explained that she had no spectacles and was finding it difficult to move around because on the night that her village was attacked by Isis, there was no time to take anything apart from the clothes on their backs. What surprised us most was that her refraction was showing up as -13.00D. Luckily, we had a set of spectacles made up to -10.00D, which fitted her perfectly and were a good match for her myopic infantile esotropia.

After three days, we had tested the sight of all of patients who needed to be seen.

This was our first visit to a refugee camp, and hopefully it will not be the last. We observed two recurring themes when seeing the refugees. Firstly, before Isis took control of the region, they all had very good access to eye care. Secondly, they had left everything behind when fleeing, including their glasses. It really put things into perspective and made us appreciate our own way of living.

Returning from our trip, we set up a crowd-funding page, and through donations we hope to make further visits to refugee camps in Kurdistan to offer much-needed free eye care in the near future.