Having faith in yourself to lead a practice 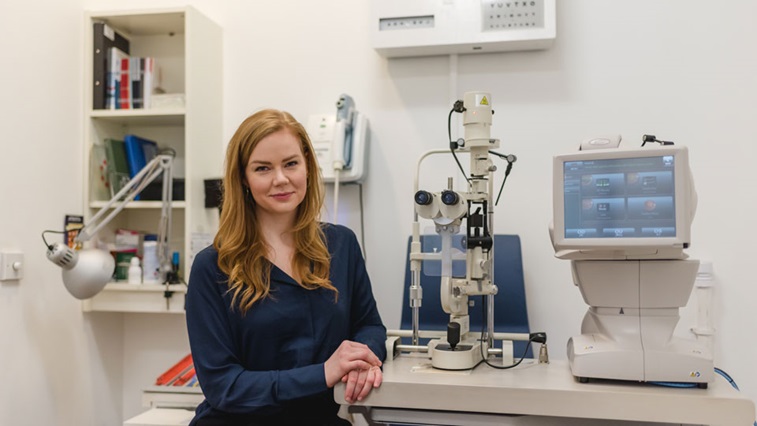 In August 2019, optometrist Gemma Hill began a new chapter in her optical career when she officially took over ownership of Forde Opticians in Glasgow.

Ms Hill qualified in 2016 having completed her pre-reg placement, and later continued full-time at the practice that she now owns.

Speaking about practice ownership, Ms Hill admits that becoming a business owner, particularly three years after qualification, was not always on the agenda.

“I definitely didn’t originally want to become a practice owner. It wasn’t something that I had always been interested in, nor was it a career goal," she says.

"However, a few things happened around 18 months after qualification and I began considering leaving practice to embark on a PhD."

How has the business adapted to the challenges that coronavirus has posed?

As soon as possible I committed to keeping the practice open for emergency and essential eye care. I forwarded calls to my mobile so that I could triage over the phone, keeping seeing patients to a minimum. I also reduced my hours, using the extra time to deliver orders of spectacles and eye care products to patients in need. Every other member of staff has been furloughed. On 2 April, I stopped offering urgent and emergency care as it was taken over by emergency eye testing centres in Scotland.


What is your biggest uncertainty as a business owner at the moment?


Although I’m happy with my financial situation for the foreseeable future, my biggest concern is how long the lockdown measures are going to last. A small company can only survive for so long.

Having realised that the financials relating to returning to full-time education were not practical at the time, Ms Hill began to explore other paths.

As the sole optometrist in a single testing room practice the majority of the time, Ms Hill slowly took on more management and business responsibility as her boss, Damian Forde, led the group’s second practice.

I definitely didn’t originally want to become a practice owner. It wasn’t something that I had always been interested in, nor was it a career goal

Talking through her career options with an optometrist friend, her peer asked Ms Hill if she had ever considered practice ownership. Whilst the short answer was no, this question got her thinking and, with her boss nearing retirement age, she decided to have an open conversation with him to see if he would be interested in selling.

“The answer was yes,” Ms Hill shared, admitting: “I simply thought, what was the harm in asking and expressing an interest, but never did I think it would be a yes.”

Ms Hill had initially pitched the purchase as a five-year takeover plan, giving her time to grow as an optometrist and learn the ropes from her boss. However, when Mr Forde agreed to sale, his preference was to sell right away. This meant she had a decision to make.

“It was obviously a lot quicker than I initially anticipated. However, when I thought it through I realised that if Mr Forde didn’t have a problem with me being so newly-qualified, why should I. He had felt that I was experienced enough to be practising by myself, as well as making managerial decisions. While I didn’t necessarily have the faith in myself, he certainly had faith in me,” Ms Hill said.

Ultimately, she decided to take the leap.

I was definitely panicky the night before, but when we opened on the Monday, it really was like a normal day at work

The purchase process took around 18 months, from the time Ms Hill had the initial conversation with Mr Forde to being given the keys.

The wheels were started in motion by Mr Forde getting the business valued, after which Ms Hill was able to create a business plan and approach a bank for a business loan.

Speaking about the loan application process, Ms Hill said that she was surprised at how easy the process was. “When I had meetings, they were happy to listen to my business plan and were encouraged to hear about a business plan based in healthcare and from someone who was so young,” she said.

“They were really approachable and really supportive every step of the way,” she added.

However, the purchase did go through and Ms Hill was handed the keys to the business on 1 August last year.

Reflecting on the day she officially became a business owner, Ms Hill shared: “There was a bit of a buzz and I was definitely panicky the night before, but when we opened on the Monday, it really was like a normal day at work. However, over the months that followed and as word got around the village where the practice is based, patients dropped cards in to say congratulations and it was amazing to hear how happy they were for me.”

Looking ahead, Ms Hill shared that she would spend the next 12 months learning more about the business and completing work on a second testing room. She added that eventually she would like to take on a pre-reg optometrist and provide them with the opportunity that was afforded to her.

What do you most like about being a practice owner?

I like being responsible and answerable to myself. I like that I can make decisions if I want to make them. I like that I can get a real time idea of how those decisions are impacting the business and if the idea has been a profitable one or not. I have also really enjoyed dealing with industry representatives and, clinically, working in areas such as dry eye, which I really enjoy.

What would you do differently?

I wouldn’t continue to test and do my day job at the same time as going through the purchase process. On reflection, I should have taken holiday rather than trying to fit everything into my working day. Stress wise, it reached a huge peak at times, but I was really lucky to have my family around me, who were really supportive. I went in with the attitude that I could do it all, but in reality, it was very difficult.


What are your three tips for purchasing a practice?

More on building a business