AOP survey on supervision in optics

The Association of Optometrists (AOP) is the leading representative membership organisation for optometrists in the UK, representing over 80% of optometrists. Our membership also includes registered optometry students, pre-registration trainees and some dispensing opticians.

From time to time we hear that our pre-registration student members have concerns with the quality of the supervision they receive, and that those who take on supervisor duties don't always feel fully supported by their employers.

Those concerns surfaced again last year when we sought views from our members about potential developments in optometry education, including the GOC's Education Strategic Review (ESR) which would involve changes to the current arrangements for student clinical placements and a proposal for a degree apprenticeship. Many members told us that given their own experience of supervision, they thought these proposed developments could pose risks to patient safety and public confidence.

To better understand these concerns and the scale of the problems, we carried out two surveys in July 2020:

There were 210 respondents to the pre-reg survey (all of whom were currently training or qualified within the last five years) and 166 to the supervisors' survey. These numbers are sufficient to be indicative of the general picture.

We are publishing this summary of the findings as an important contribution to the current debate around changes to optometrist education. In particular, our members' experiences, as reported in the survey, demonstrate the need for any changes to be properly funded, in the same way as in other healthcare disciplines, to ensure that newly qualified optometrists are safe and ready to face the challenges of a fast-changing profession.

Where pre-reg placements take place and who does the supervising

Supervisor respondents had been qualified between one and over 25 years, with an even spread of years of qualification. The largest group (22.6%) was in the over 25 years category.

60% of supervisors were practising optometrists with their own full caseload. Only 16% had time specifically allocated to the supervision role.

Student satisfaction with the quality of supervision

Which of the following options best describes the support you received when conducting sight tests and contact lens appointments? 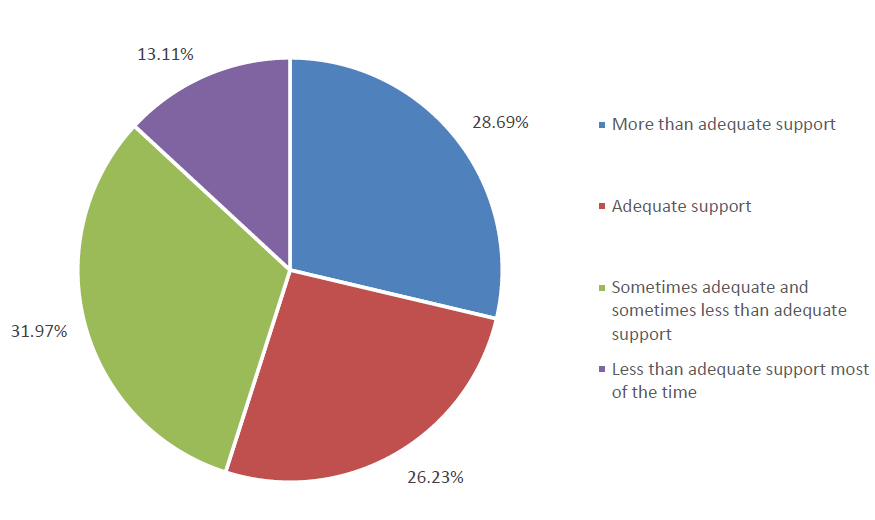 Most trainees felt that their supervisors had a good or fair understanding of the requirements of the Scheme for Registration. 68% found the feedback they received from their supervisors very or fairly useful, with 11% finding it not very useful or not useful at all.

Trainees described a similar picture, with:

Free text answers indicated that checks are made to be sure that there is safe practice (eg checking of fundus photos), but nonetheless around a fifth of trainees do not have their interactions with patients observed.

Did your supervisor sit in to observe your sight tests or contact lens appointments? 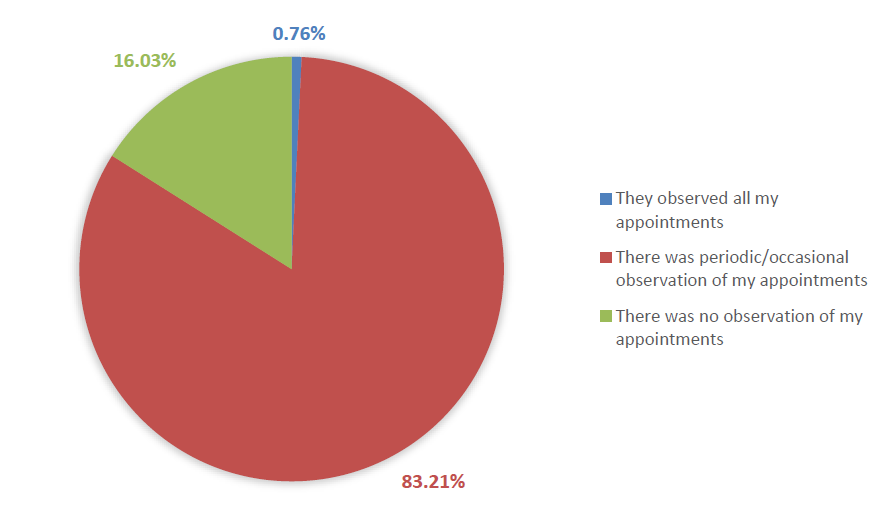 All trainees reported a number of interactions with their supervisor to check their progress.

Which option best describes the support your workplace allows you to give your pre-reg trainees with their appointments? 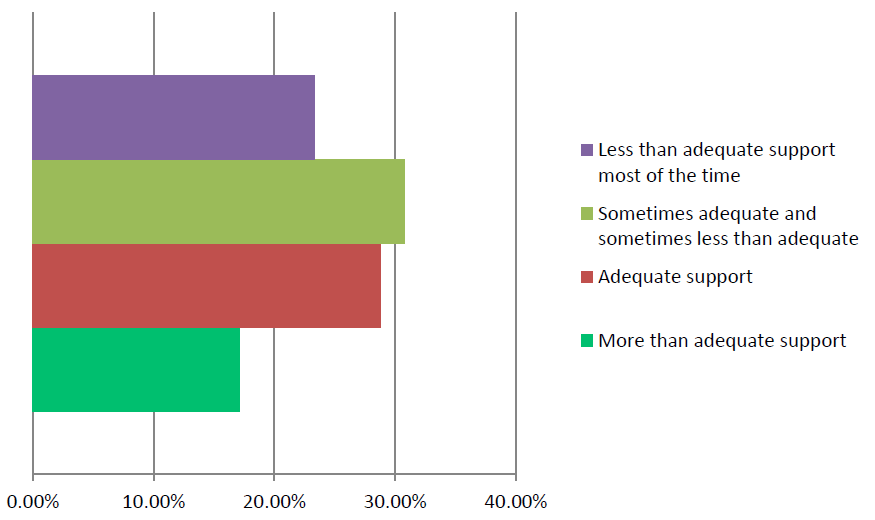 Asked what the biggest barriers were to providing adequate support, the vast majority of supervisors mentioned time. In the box below are several quotes that are typical of the majority.

What supervisors said was their biggest barrier to providing adequate support

Overload of work in a busy practice which can only be completed by a qualified optometrist. Especially trying to manage WECS appointments on top of a fully booked clinic. This prevents any spare time being available to discuss cases with pre regs.

I have to provide additional training in my own time during lunch breaks and before/after work. I would only be able to take between 1-3 appointment slots out of the diary per week to provide any support and training/feedback. Testing times are unchanged regardless of having a pre-reg or not. This would result in me checking the pre-reg patient records/photos and rx between my own full clinic. This means no time for good quality feedback to be provided.

A minority (39%) of trainees felt that they got enough time with their supervisor.

In your opinion, did you have adequate time for feedback and support from your supervisor (or supervisors)? 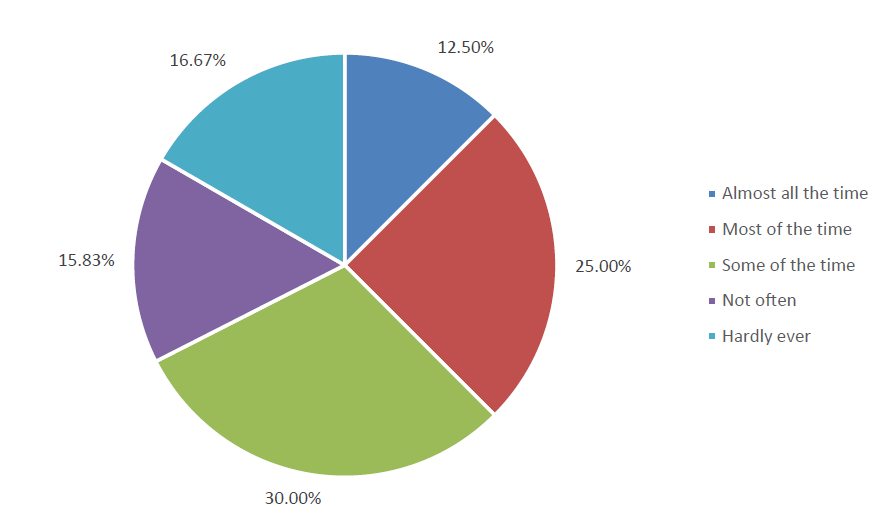 Both groups reported that they had to "find" the time for supervision and support within the day, with over 20% reporting that they used their own time, during what should have been breaks, or Q12 Is/was time with your pre-reg trainees for supervision usually?

Is/was time with your pre-reg trainees for supervision usually? 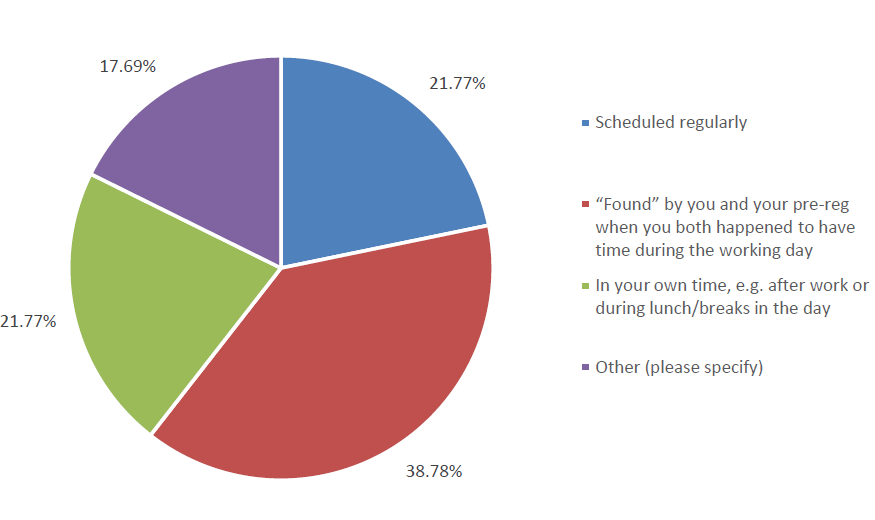 Was time with your supervisor: 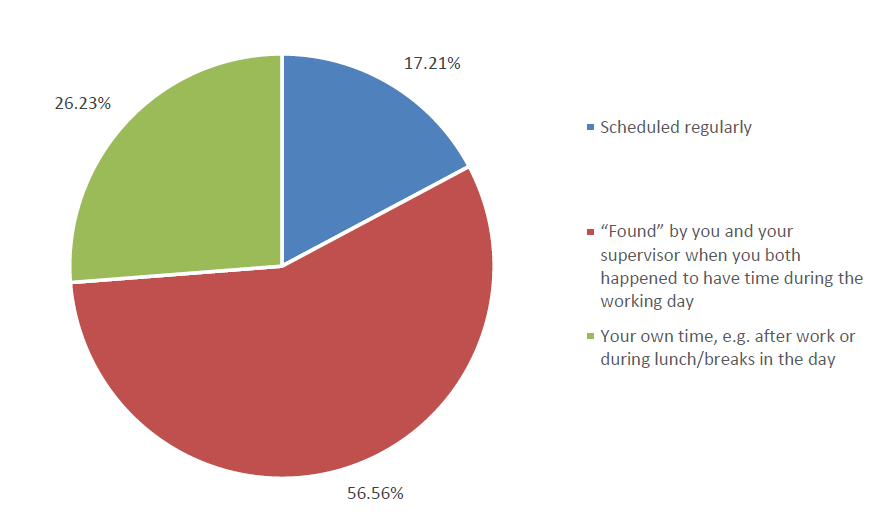 Expectations and pressures - on pre-reg trainees

Expectations and pressures - on supervisors

Of those recent pre-regs who responded to the survey, most felt that overall, the support they received was adequate or better than adequate, but a significant minority said it was sometimes less than adequate. The majority of supervisors found lack of time to be the biggest barrier to providing adequate support to their trainees. And both groups reported having to find the time to meet to discuss their work and progress, rather than having it scheduled.

These results show that the system for providing supervision for pre-reg optometrists is run with limited resources, and where it functions effectively, as it does much of the time, this is largely due to the good will of both supervisors and trainees.

In our view there is a structural problem in the funding of pre-reg optometry training.

The College of Optometrists' Scheme for Registration, run under GOC accreditation, is focused on assessing trainees against fulfilment of the GOC's Stage 2 competencies. Quality assurance arrangements are in place for all elements of the assessment, while the Scheme includes mechanisms to ensure that trainees fulfil the GOC's patient episode requirements and that supervision arrangements for individual trainees fulfil the GOC criteria for these. The College provides supervisor training, and trainees can raise concerns with the College about their placement experience, which will be followed up. But the College and Scheme do not have responsibility for assuring the quality of trainees' supervised practice placements.

The current NHS grant to practices for pre-registration supervision is inadequate at around £3,700. (And as the pre-reg grant is part of GOS funding, it is not available at all for hospital pre-reg placements). This is well below the levels of NHS funding of clinical experience for other professions Pharmacy pre-registration grants are over £18,000, and like other healthcare professions they receive support for placements and training from Health Education England.

The pre-registration grant for optometry broadly covers the costs of assessment but is insufficient to enable optical practices to give supervisors dedicated time to support pre-registration trainees. Many supervisors are providing supervision alongside a full clinical workload of their own. In these circumstances it is unsurprising that employers expect trainees to contribute to practice income at an early stage, but this can detract from quality clinical training.

The results of our surveys reinforce our concerns about the resourcing of the new education system proposed by the GOC's ESR.

The average optical practice in which a person does their pre-reg training is a pressured environment, in which supervisors are not given protected time to carry out support, as there is not funding for this available. Both supervisors and trainees describe a system in which it is hard to find time to carry out supervision or review progress. Because of inadequate NHS funding, a lot seems to depend on goodwill, and it does not seem that most employers put supervision time in the diary.

In the NHS, supervision and training time is usually built into professionals' contracts. This is not the case in community optics. Primary care optical practices that offer pre-registration places do so from a combination of motives, including a wish to contribute to the future of the profession; a recognition that the pre-reg student will become an economically-valuable member of staff in due course; and, for some, the chance to identify individuals who will one day take over the practice. In optics, unlike the NHS, these short-, medium- and long-term benefits will all have to be balanced against the short-term need to make a profit.

Any change to the current system that relies on good supervision in workplaces but does not provide adequate funding and assurance for it, will not succeed.