Pocket perfection: how technology is transforming the lives of those with sight loss

“For the last 20 years, I have had to wait for my husband to wake up to read me the newspaper. Now, as soon as he wakes up, I tell him about it”

Many people would not think twice about checking the oven is at the right temperature or making sure that a shirt and tie do not clash. But these everyday scenarios can prove challenging for people living with sight loss.

This is where Danish entrepreneur Hans Jorgen Wiberg had a light bulb moment.

Mr Wiberg, who has retinitis pigmentosa, wondered what would happen if he enabled blind and partially sighted people to “borrow” the eyes of sighted volunteers for short amounts of time using smartphone technology.

“I didn’t see this solution anywhere, so I thought, ‘I will have to make it myself’,” he told OT.

The resulting Be My Eyes technology turns on a smartphone’s camera, microphone and speaker to link a user with sighted volunteers who help with simple tasks such as checking the expiry date on a milk carton.

Following its launch three years ago, more than 104,000 blind and partially sighted people have signed up to use Be My Eyes, alongside 1.8 million volunteers around the globe who speak 180 different languages. Of these volunteers, 84,000 are based in the UK.

Mr Wiberg explained that the beauty of the technology is that it provides an anonymous, hassle-free way to ask for help with simple things.

“It is not about building a relationship with the other person; it is just about asking the question, ‘Can I borrow your eyes for 30 seconds?” he said.

For volunteers, signing up to Be My Eyes is an easy way of giving back to the community, Mr Wiberg added. 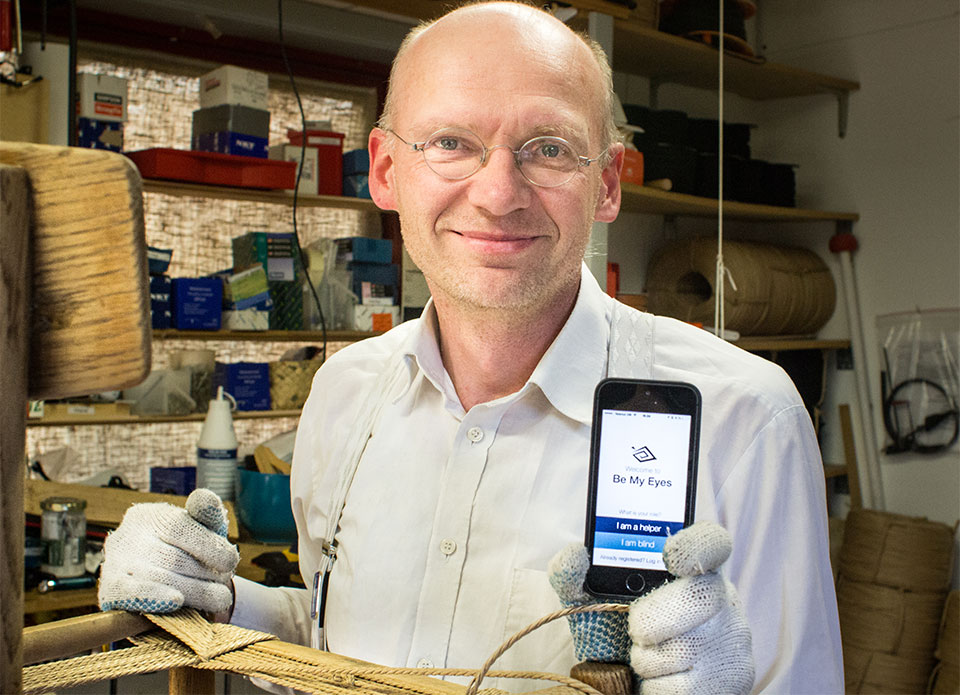 Be My Eyes inventor and founder Hans Jørgen Wiberg

Be My Eyes has certainly proved to be a low-key way of volunteering for Andrew Hodgson.

After signing up to be a volunteer two years ago, he has only received one call from a man attending a formal dinner party.

“He asked ‘Which of these two shirts is more formal?’ then he hung up,” Mr Hodgson told OT.

Mr Hodgson is the chief technology officer for In Your Pocket, a voice-controlled mobile reading device and smartphone designed specifically for people with vision impairment.

The device launched in the UK in March 2018. It has a simple interface that does not require users to touch the screen or enter a password.

Mr Hodgson shared that when In Your Pocket was first launched in Australia, a woman called him up and told him that the device had changed her life.

“I asked her, ‘How?’ and she said, ‘For the last 20 years, I have had to wait for my husband to wake up and read me the newspaper. Now, as soon as he wakes up, I tell him about it,” Mr Hodgson recounted.

“Suddenly you, as a low vision or blind person, can add something: you are not always the person receiving or asking for advice,” he shared.

“You can make dinner or tell your husband the news. It is hugely important for your life,” he observed.

In December, In Your Pocket announced the integration of Be My Eyes.

Mr Wiberg highlighted that the development would mean people who required more technical support to get started with Be My Eyes would be able to access the technology.

“I hope we can reach a larger group of people,” he said.

I use In Your Pocket all the time. You have the phone in front of you. You press a button at the bottom and you speak your request. If I say, ‘Read The Guardian’ ‘What time is it?’ or ‘Find me articles about bees’ it will give me a response.
In Your Pocket massively improves my leisure time. I can keep up to date with the news, music and magazines. I am curious about everything and like to have an in-depth view of what is happening. For the first time ever, I can dig deep and get more information.
I enjoy using In Your Pocket as a navigation aid. My wife and I live in a country park area. She doesn’t see at all and I see a little bit. With my little bit of vision, it all looks the same: a brown path with green on the sides. We have mapped it all out so we can walk anywhere with confidence and not worry about falling in the lake or the river.
For years, I have travelled on trains, taxis and buses for my job, but I have never been able to pop into the station and buy a newspaper and read it. I have never been able to read a book without taking a big bulky braille book on my lap. Now I have access to everything when I travel. I even know the railway stations I am passing so I don’t miss a stop.