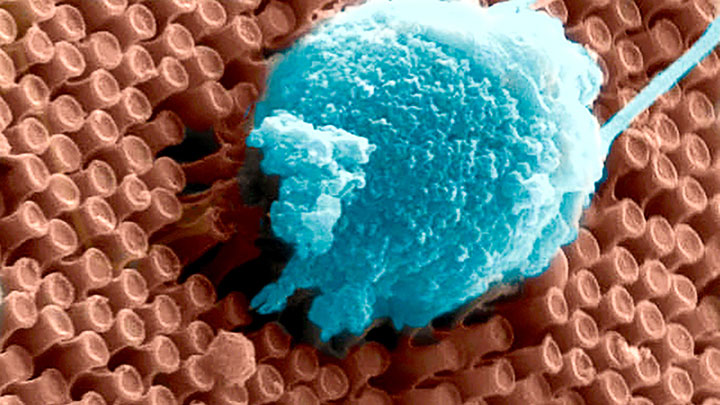 American researchers are making progress on a retinal prosthesis that aims to restore functional vision in the blind.

The project is the result of a collaboration between a team of engineers at the University of California San Diego and the start-up, Nanovision Biosciences.

The new prosthesis relies on two technological breakthroughs. Silicon nanowires mimic the light-sensing rods and cones to simultaneously sense light and stimulate the retina, while an external wireless device transmits power and data to the nanowires.

“We have engineered our device in a very conscious way to be able to provide the best signal possible and enable visual acuity that will improve the lives of people,” he emphasised.

“We have a theoretical target of around 20/200 which is pretty good compared to people who can just see light and dark. You would have some useful vision with that kind of visual acuity,” Mr Thorogood highlighted.

Tests using a prototype device in rabbits showed response to light stimulation in the visual cortex.

“We are very confident that we have a device that is going to change the lives of people who cannot see. That is a big motivator when you get up in the morning – when you are working on something that can literally affect the lives of millions of people,” he emphasised.

Research describing the project is published in the Journal of Neural Engineering.

Senior author and professor of bioengineering, Gert Cauwenberghs, told OT that the device was activated directly by light entering the eye at high spatial resolution. The prosthesis was powered and controlled by an external electrical signal.

The technology was more responsive at low light levels and allowed for the tailoring of stimulation levels to changes in ambient light and the specific needs of a patient, he explained.

Professor Cauwenberghs highlighted that the long-term objective of the work was to drastically improve spatial resolution of retinal prostheses.

“The greatest ultimate impact will be for the blind to be able to conduct normal lives in recognising people and objects in their surroundings, participating as active citizens in society,” he concluded.